Ultras: A boys’ own descent, seething with pointless masculinity

Review: No film will flunk the Bechdel Test quite as spectacularly this month 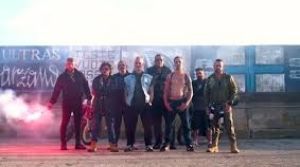 An opening blast of Turin disco kings Righeira plays over a handy primer into the violent history of Napoli’s Ultras, featuring a montage that takes us from Diego Maradona’s famous tenure at the club through run-ins that might take pride of place on a trashy Football’s Greatest Hooligans showreel.

An opening disclaimer has already made plain that the insignia and banners depicted on screen are fictional and that the film was not made with the co-operation of the Ultras.

The Napoli Ultras, for those not up on footballing politics, are not as openly neo-fascist as the Ultras of Verona, Lazio and Inter, but they are intimidating enough for several wives and families associated with the team to go into hiding late last year.

The fictional world of writer-director Francesco Lettieri’s debut feature is no less fractious. Aged 50, Sandro (Arena) – or Mohican as most of his chums call him – is an elder statesman among Napoli FC’s Ultras. As he arrives at the wedding of another Ultra, the crowd seems to part like the Red Sea as Sandro joins a terrace choir in celebrations.

Sandro and many of his peers are banned from football fixtures and must sign in with local police before matches. He is soft on Angelo (Nacca), a youngster whose brother has already been killed “in action”. He is also soft on Terry (Truppo), a younger woman he meets at a bathing house. Those feelings blunt him in an escalating war between younger factions in the group who wish to travel to matches and make their own banners without deference to their elders.

Free-flowing and powered along by dance beats, Lettieri’s film conveys the romance and camaraderie of the crew while maintaining a constant air of menace. If anything, and in common with many crime films before, it’s arguably a little too embedded in the culture.

No film will flunk the Bechdel Test quite as spectacularly this month, but this is a boys’ own descent, seething with a masculinity that proves puffed up and pointless. An accomplished debut enabled by a charismatic ensemble.

Opens on March 20th on Netflix