I Am Not a Witch review: Serious satire on a terrifying phenomenon 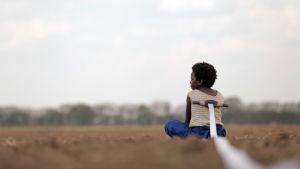 Film Title: I Am Not a Witch

In this part of the world, we’re lucky enough to be familiar with the socially aware but genre-mindful cinema of Alan Clark and Ken Loach. But I Am Not a Witch, the knockout debut feature from Rungano Nyoni – born in Zambia, raised in Wales – is something else again, an extravagant flight of fancy that functions equally well as an anthropological curiosity, engrossing drama, feminist allegory, tart political satire and dire warning against xenophobia.

This fascinating film begins with ludicrous accusations levelled against an orphaned nine-year-old girl, Shula (played by remarkable newcomer Margaret Mulubwa). One neighbour denounces her for poisoning the local well; another alleges the girl has chopped off his arm with an axe (no matter that said limb remains entirely attached). A hilariously nonchalant police officer (Nellie Munamonga) calls in Mr Banda (Henry BJ Phiri), a scheming local official. He determines that Shula will live in a witch camp, but not before he profits from her “gifts”.

Witchcraft is vilified in certain rural parts of Ghana and Zambia, where witch camps are a disturbingly real thing. Rungano Nyoni’s satire imaginatively connects the witches to their compulsory villages by a long, white ribbon (in real life, they would be bound by a spell). In common with Melvin Burgess’s controversial YA novel Lady: My Life as a Bitch, Nyoni’s life asks if it’s better to live as a roaming goat or a tethered woman. In this spirit, Mr Banda introduces Shula to a mentor, a “kept woman” who lives in a luxurious house away from the other witches. “Respectability,” she promises Shula: “Because I did everything I was told.”

Stylistically, this is a big, bold movie enlivened by counterpointing bursts of Vivaldi and Estelle’s American Boy and the gorgeous compositions of director of photography David Gallego, who shot 2015 Oscar nominee Embrace of the Serpent.  Spellbinding stuff.