Charlize Theron, Nicole Kidman and Margot Robbie star in true story of how Roger Ailes was brought down by sexual harassment allegations 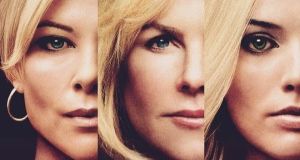 The full trailer for Bombshell has provided a more in-depth look at one of the season’s most anticipated dramas, detailing the takedown of Fox News mogul Roger Ailes.

Charlize Theron stars as Megyn Kelly and Nicole Kidman as Gretchen Carlson, two of the women who took on Ailes, played by John Lithgow, with accusations of sexual harassment. Margot Robbie also stars as a fictional producer, built from a number of real-life women.

The film, from Game Change and Austin Powers director Jay Roach, was unveiled over the weekend in Los Angeles to Oscar buzz, particularly for Theron’s reportedly transformative role as the controversial TV figure.

“It was very important to me that we set out on a road of whatever the greater truth is and stayed on that road and that we never veered and tried to make her sympathetic or to try and persuade people to like her or to think that she was a hero or a good person, that we just told the truth of what her story was,” Theron said after the screening. She also added: “I have no interest in playing heroes.”

In preparation for the script, Oscar-winning The Big Short screenwriter Charles Randolph conducted numerous interviews with ex-Fox staffers, many of whom decided to cast aside their nondisclosure agreements in order to provide background information. The film was given the green light before both the election of Donald Trump, who has been accused of sexual harassment and abuse by 25 women, and the start of the #MeToo movement but the makers have noted the timeliness of the story’s retelling.

Randolph has stressed the importance of focusing on misconduct within an organisation that’s responsible for some amoral tactics. “No woman, no matter what you think of her politics, deserved to be harassed,” he said. “This resonates way beyond that.”

Bombshell will be released in the US in December and in Ireland and the UK in January. – Guardian