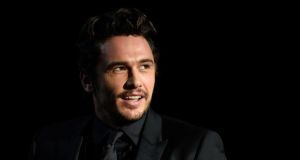 James Franco: the actor denies sexualising his ‘power as a teacher and an employer by dangling the opportunity for roles’ in his projects. Photograph: Ander Gillenea/AFP via Getty

James Franco is the subject of a new lawsuit claiming his acting school sexually exploited women.

In the suit filed in Los Angeles, Sarah Tither-Kaplan and Toni Gaal allege that Franco’s now-defunct programme allowed him and male collaborators the opportunity to dangle potential roles in front of women while engaging in inappropriate conduct, according to the New York Times and National Public Radio.

The Oscar-nominated star of 127 Hours was behind a school called Studio 4, which had branches in New York and Los Angeles, alongside his partner Vince Jolivette. Tither-Kaplan and Gaal enrolled in the LA program and paid a monthly tuition of $300, or about €275. There were also additional masterclasses, including a $750, or €685, class for sex scenes. The lawsuit claims that students had to audition for the class on tape so Franco could review the footage. Students were also allegedly asked to sign away their rights to the recordings.

The suit alleges Franco and his partners “engaged in widespread inappropriate and sexually charged behavior towards female students by sexualizing their power as a teacher and an employer by dangling the opportunity for roles in their projects”.

During classes and auditions, the suit claims, “often young and inexperienced females were routinely pressured to engage in simulated sex acts that went far beyond the standards in the industry”.

Franco has claimed the representation is “not accurate”.

In 2018 the actor was accused of sexual misconduct by five women, including Tither-Kaplan. At the time Franco’s lawyer denied the claims, and Franco addressed them during a television interview with Seth Meyers.

Since the accusations Franco has continued to star in the HBO drama The Deuce, while last week saw the US release of his Hollywood satire Zeroville, which was met with negative reviews and box-office failure. He will next be heard voicing “a scatterbrained albatross” called Lemmy in the animated children’s adventure Arctic Justice.

The lawsuit is seeking damages and the return of any recordings. The two accusers have told National Public Radio they hope to make it a class-action suit, so other women can become involved. Franco’s representatives have been contacted for comment but have yet to reply. – Guardian