Backstreet Boys: Show ‘Em What You’re Made Of review – boys to men via therapy

In the 1990s, the Backstreet Boys toured non-stop, burned out and developed various addictions. Now they’re older, wiser and ready to open up 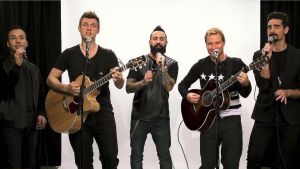 Film Title: Backstreet Boys: Show 'Em What You're Made Of

Is this some kind of science-fiction documentary? Twenty years of the Backstreet Boys? Get up the yard.

Except it’s worse than that. This behind-the-scenes chronicle was shot as the Florida quintet marked that anniversary with a new recording. So it’s been 22 years since those blended harmonies first hit the airwaves. Back when airwaves still existed. Death, where is thy sting?

Unsurprisingly, memory and mortality take centre stage in this informative, emotionally open documentary from Stephen Kijak (Cinemania, Scott Walker: 30 Century Man). The film opens with an autumnal hike: Recovering addict AJ has fallen behind the other four: “This is really shitty for my knees,” he complains. We cut to Brian and his therapist as they battle against the ravages of vocal tension dysphonia. Later, Nick recalls the band’s intervention when he got fat and drug-addled.

As the rating suggests, Show ‘Em What You’re Made Of is no mere promotional fluff piece. True, there are some contrivances: a device that sees the band alight in each of their respective hometowns, produces plenty of man-hugs. But beneath the squeaky clean nineties façade, there were five regular lads who, tellingly, never really got the time to meet each other’s families. Instead they toured non-stop, learned the German for “can I have a blow-job?”, and developed various addictions before emerging as older, wiser people with wives and kids.

They sold 130 million records but did not receive a fair share of profits: their impresario-manager Lou Pearlman was jailed in 2008 for perpetrating the largest scale Ponzi scheme ever uncovered in the US. There were other smaller warning betrayals: the formation of rival outfit N’Sync by the same manager, promises of lead vocals that never came to pass.

They’re still reeling from these and from other emotional sores: “Don’t be a fucking dick like everyone knows you are ... I’m not afraid of you anymore,” Nick bellows at Brian during a meeting.

For all these ills, post-break-up and reunion, the boys – or rather men – remain touchingly close. It’s just that now they manage themselves, release independently and have better lawyers.