And the nominees for the 2018 Academy Award for best picture are ... 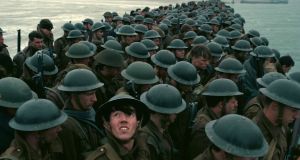 Still, predicting the best film nominees at this remove is such a crapshoot that nobody could much blame us if we got them all wrong. We named only one eventual nominee last year and we still held our heads high. (It was Manchester by the Sea, by the way.)

Unless they change the rules again, there will be a maximum of 10. So that’s the number we’ve picked.

The 2018 Oscar nominees for best picture

Everyone has this pencilled in. Christopher Nolan’s study of the famous second World War rout is packed with stars. Tom Hardy, Cillian Murphy, Kenneth Branagh, Mark Rylance and, yes, Harry Styles from One Direction are on the beach. There is only one black mark: the film opens in June. This year, not a single picture released in the first half of the year made it into the final nine.

Poor Joe Wright has had a rough time of it recently. The director of Atonement and Pride and Prejudice bombed spectacularly with Pan (whose title indicated the reviews it would receive). But Darkest Hour still sounds like Oscar bait. Gary Oldman is Winston Churchill. The late John Hurt is Neville Chamberlain. Will presumably cover some of the events in Nolan’s Dunkirk.

CALL ME BY YOUR NAME

There is usually a film that wowed Sundance in the list. This year it was Manchester by the Sea. Luca Guadagnino’s tale of a gay romance in 1980s Italy was the best received film at the recently concluded Utah event. In earlier years, we would have thought this too recherché for the Academy. But with the recent success for Moonlight, this now looks very possible.

Catchy title. Huh? Anderson reunites with Daniel Day Lewis for a drama set in London’s fashion world during the 1950s. Jonny Greenwood, an Anderson regular, is composing the score. The picture is shooting now. So it should be ready for Toronto or Venice at the end of the summer. Or may it creep into next year?

Destin Daniel Cretton helped make Brie Larson’s name with the skilful Short Term 12. Now, he directs the Oscar winner in an adaptation of Jeannette Walls’s memoir concerning a dysfunctional family in the United States in the 1960s and 1970s. This has the feel of an Oscar challenger. They love true stories. Woody Harrelson and Naomi Watts flesh out the classy cast.

Todd Haynes is, like Paul Thomas Anderson, on many critics’ lists of “best living American directors”. The egghead’s follow-up to Carol stars Julianne Moore in a coming-of-age tale based on a book by Brian Selznick. Rumours suggest that one of the two timelines will be told as a silent film. The film shot last year.

And the snappy titles just keep coming. Bigelow sticks with her school of dramatised reportage for a study of the riots that spread across Detroit in 1967. There has already been some mumbling about the apparent mass of white actors in an African-American story. Will Poulter, Kaitlyn Dever and our own Jack Reynor are all on board. Both her previous films, The Hurt Locker and Zero Dark Thirty, were nominated.

We’re reliably informed that Darren Aronofsky’s latest is proper rendered mother! As you will. The synopsis reads: “A couple’s relationship is tested when uninvited guests arrive at their home, disrupting their tranquil existence.” Is it Who’s Afraid of Virginia Wolf? in reverse? The cast includes Jennifer Lawrence, Javier Bardem, Michelle Pfeiffer, Domhnall Gleeson and Brian Gleeson. Yum, yum! Want!

Alexander Payne has an enviable record with the Academy. His last three films, Nebraska, The Descendents and Sideways, were all nominated for best picture. So you would be a fool to bet against this admittedly bizarre-sounding project. Matt Damon and Kristen Wiig decide to have themselves shrunk, but she backs out at the last minute.

THE KIDNAPPING OF EDGARDO MORTARA

Steven Spielberg struck out with the strangely unmoving The BFG, but this sounds like more the Academy’s thing. Oscar Isaac and Mark Rylance star in the true story of a Jewish boy snatched by the Catholic Church in the 19th century. Tony Kushner, who wrote the nominated Lincoln and Munich for Spielberg, is back behind the typewriter.