After the Storm: lightly comic with a sting in the tail 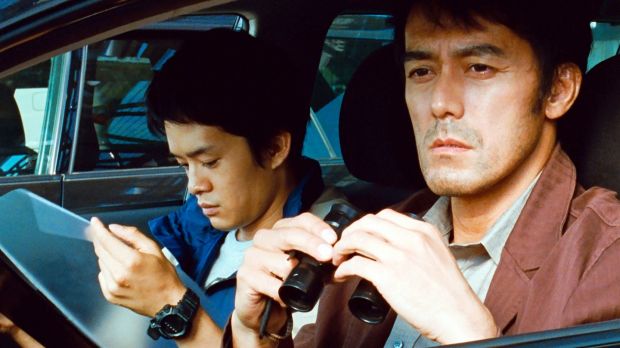 Sosuke Ikematsu and Hiroshi Abe in After the Storm

Film Title: After the Storm

Ryota (Hiroshi Abe), is a tall, handsome, prize-winning novelist. He could have been a contender. Instead, he’s a deadbeat dad who has fallen months behind on child support and who can’t even cheer on his son a baseball games without sounding daft.

His ex-wife, Kyoko (Yoko Maki ) insists he pays up – not for the first time, we suspect – or he risks not seeing his young son, Shingo (Taiyo Yoshizawa). She relents – not for the first time, we suspect – as Shingo misses his dad and is not keen on Kyoko’s rich new boyfriend: “If we win the lottery could we all live together again?” the boy later asks his grandmother.

Certainly, money is an issue, but there’s more to it than that. Ryota supplements his failing writing career by working as a detective and occasionally by scamming those he investigates. A compulsive gambler who’s perennially in debt, he’s constantly raiding the cupboards of the apartment that belongs to his recently widowed mother, looking for things to pawn. Often, his late father has beaten him to it.

His wry, wise mother (Sweet Bean’s Kirin Kiki) compares her son to the plant on her balcony she waters: it neither flowers nor produces fruit, but it does feed caterpillars.

To trick Kyoko into spending time with him, Ryoto brings Shingo to his mother’s apartment just as a storm is approaching Tokyo. Sure enough, Kyoko and Shingo get stranded and the board games come out. “Playing Game of Life with you is like a bad joke,” Kyoko snaps at Ryoto.

In common with the long-suffering Kyoko, it’s impossible for the viewer not to like the roguish, goofy Ryoto. But you just don’t want to be married to the guy. A likeable loser hero, he’s a typically bittersweet, nuanced Hirokazu Koreeda creation.

As ever, the director has fashioned a lovely, appealing, lightly comic film that exists somewhere between late Ozu and early Spielberg. Just when you think you’re watching a variation on The Parent Trap, the film wanders away from big strings and melodrama. The bickering, especially between Ryota and his suspicious sister, is keenly observed. The digs are as sly as the rest of the film.