From Éamon de Valera to Severus Snape, Alan Rickman had a long and varied acting career, these are some of his best known roles. 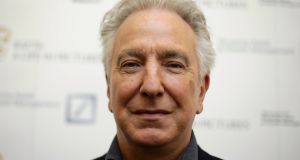 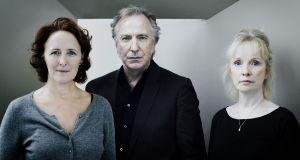 Fiona Shaw, Alan Rickman and Lindsay Duncan in the Abbey Theatre production of John Gabriel Borkman by Henrik Ibsen, in a new version by Frank McGuinness. 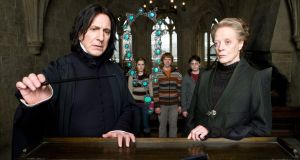 Alan Rickman as Severus Snape in a scene from Harry Potter and The Half-Blood Prince.

Alan Rickman, one of the best-loved and most warmly admired British actors of the past 30 years, has died in London aged 69.

His death was confirmed on Thursday by his family. Rickman had been suffering from cancer.

A star whose arch features and languid diction were recognisable across the generations, Rickman found a fresh legion of fans with his role as Professor Snape in the Harry Potter films. But the actor had been a big-screen staple since first shooting to global acclaim in 1988, when he starred as Hans Gruber, Bruce Willis’s sardonic, dastardly adversary in Die Hard – a part he was offered two days after arriving in Los Angeles, aged 41.

Gruber was the first of three memorable baddies played by Rickman: he was an outrageous sheriff of Nottingham in 1991’s Robin Hood: Prince of Thieves, as well as a terrifying Rasputin in an acclaimed 1995 HBO film.

But Rickman was also a singular leading man: in 1991, he starred as a cellist opposite Juliet Stevenson in Anthony Minghella’s affecting supernatural romance Truly, Madly, Deeply; four years later he was the honourable and modest Col Brandon in Sense and Sensibility, starring and scripted by Emma Thompson. He was to reunite with Thompson many times: they played husband and wife in 2003’s Love, Actually and former lovers in 2010 BBC drama The Song of Lunch. He also played Éamon de Valera in the 1996 historical biopic of the Irish civil war Michael Collins.

Rickman publicly spoke of his unhappiness about the “Hollywood ending” of Michael Collins, a , and expressed his belief that art ought to help educate as well as entertain. “Talent is an accident of genes, and a responsibility,” he once said.

In 1995, he directed Thompson and her mother, Phyllida Law, in his directorial debut, the acclaimed Scottish drama The Winter Guest. Last year, he reunited with Kate Winslet, another Sense and Sensibility co-star, for his second film as director, A Little Chaos – a period romance set in the gardens of Versailles.

Yet it was Rickman’s work on stage that established him as such a compelling talent, and to which he returned throughout his career. After graduating from Rada, the actor supported himself as a dresser for the likes of Nigel Hawthorne and Ralph Richardson before finding work with the Royal Shakespeare Company (as well as on TV as the slithery Reverend Slope in The Barchester Chronicles).

His sensational breakthrough came in 1986 as Le Vicomte, the mordant seducer in Christopher Hampton’s Les Liaisons Dangereuses. He was nominated for a Tony for the part; Lindsay Duncan memorably said of her co-star’s sonorous performance that audiences would leave the theatre wanting to have sex “and preferably with Alan Rickman”.

He and Duncan – as well as their director, Howard Davies – reunited in 2002 for Noel Coward’s Private Lives, which transferred to Broadway after a successful run in London.

Other key stage performances included Mark Antony opposite Helen Mirren’s Cleopatra at the Olivier Theatre in London, and the title role in Ibsen’s John Gabriel Borkman at the Abbey Theatre in Dublin in 2010 – again with Duncan, and again transferring to New York. The following year he starred as a creative writing professor in Seminar on Broadway.

In 2005, Rickman directed the award-winning play My Name is Rachel Corrie, which he and Katharine Viner compiled from the emails of the student who was killed by a bulldozer while protesting against the actions of the Israel Defense Forces in the Gaza Strip.

Rickman remained politically active throughout his life: he was born, he said, “a card-carrying member of the Labour party”, and was highly involved with charities including Saving Faces and the International Performers’ Aid Trust, which seeks to help artists in developing and poverty-stricken countries.

He and his wife, Rima Horton, met when they were still teenagers; she became an economics lecturer as well as a Labour party councillor. In 2012, the pair married, having been together since 1965.

Rickman was an actor unafraid of the unexpected. He voiced a monarch in an episode of cult carton King of the Hill and a megalomaniac pilot fish called Joe in the Danish animator Help! I’m A Fish.

In 2000, Rickman appeared as Sharleen Spiteri’s love interest in the music video for Texas’s 2000 hit In Demand, which involves them tangoing at a petrol station. In 2015, Rickman again featured in the video for one of their singles, this time with vocals.

He spoofed his own persona in comedy Galaxy Quest (2000), in which he plays a Shakespearian-trained actor who has found fame as a Spock-style alien in a long-running sci-fi series and in Victoria Wood’s Christmas special of the same year, as an upright colonel at the Battle of Waterloo.

Rickman was sanguine about his legions of admirers, who declared their love on countless websites, video tributes and at stage doors. Even scientists were not immune: in 2008, linguistics professors concluded that the most appealing male voice mixes elements of Rickman, Jeremy Irons and Michael Gambon.

Recent film roles included an art-loving lord in the Coen brothers’ scripted farce Gambit (2012), as Ronald Reagan in Lee Daniels’s The Butler – and a humorous, imperious King Louis XIV in A Little Chaos.

Rickman is still to be seen in Eye in the Sky, a thriller about drone warfare that won rave reviews at the Toronto film festival last year, and repeating his voiceover as Absolem the Caterpillar in Alice Through the Looking Glass, also due for release later this year.