Mark Graham gets his posh on in Kilruddery 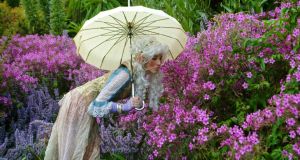 In 1682, the Earl of Meath shipped in a Diarmuid Gavin de jour to design a landscape specifically for entertaining large numbers of people on the grounds of Kilruddery Estate. He did some job. Yew hedgerows, long elegant ponds, cherub-riddled fountains, manicured terraced lawns and gargantuan hedges circling lily ponds and an amphitheatre. I don’t think I’ve ever seen a finer site for a session. This was the first time I’ve pulled up at a festival field and felt like wiping my feet before getting out of the van. “Are they really going to let a festival crowd in here” I heard someone ask as the gates were flung open and the great unwashed traipsed in. I began to feel more at home by Sunday afternoon as I walked past the perfectly symmetrical lavender garden, with butterflies and bees flitting between the flowers, and spotted a punter pissin’ on the peonies.

Groove and Westport Music Festival are setting the standard when it comes to family friendly festivals. Not having camping on-site helped Groove pull this off. One of the traders told me that they didn’t shift as many gee-gaws because the punters weren’t as drunk as some other festivals where they regularly set up stall. The gigs were done and dusted before 11, so the crowd weren’t fully festivalised up before wandering home to blanket street.

BEWILDERED BUZZERS
As a result of this laid-back, day-in-the-park vibe, there were a few bewildered buzzers wandering around looking bereft. There was a distinct lack hedonist high-jinx. Soul II Soul were a highlight on Saturday, winding the crowd up nicely, but the atmosphere was waning when James Morrison took to the stage. A polished, well produced and presented performance, but he didn’t even play one Doors song. WTF!? Poor aul Ray Manzarek. I have to admit, I did have a little dance to Mr Morrison. Think I’m off the hook though, options were limited.

Ali Campbell dropped some UB40 vibes in perfect reggae weather, but it was a weird one. I’m a sucker for a spot of reggae in a sunny field and when the substitute ’40s pulled out the well-worn reggae standard Homely Girl it hit the groove, but Ali began gyrating suggestively, making what must once have been his sexy face; some onlookers felt violated. His singing voice is patois perfect for Kingstonian crooning, but between songs the Brummie brogue threw me for a loop. When Red Red Wine rolled around, the sun shone, the crowd sang and everyone seemed happy.

It felt like the headliner selection was purposely middle of the road to keep the atmosphere on the lowdown; this is not a spot where Swedish House mafiosos would fit in easily. The Raglans were a highlight of the weekend, their energy levels giving the day a needed shot in the arm. Little Bear were enjoyable too, the new single, Night Dries Like Ink/Killer, is out Monday. Sounds good, keep sketch.

The crowd on both days was nowhere near capacity, picked up a bit on Sunday, Damo and Imelda tempting the Dublin crowd onto the DART. Losses were made this year, but there’s a three-year commitment, so next year will tell a lot. This festival has serious potential.

BIG HOUSE BOLOGNESE
Buzzing around so many festivals, there are always some familiar faces and it would have been rude not to invite them back to the van for a digestif, there being no other saloons on-site.

Not long after the visitors made their good-byes, my phone rang to tell me they’d somehow found their way into the Big House where Spaghetti Bolognese and G&T’s were being prepared, would I like to join them? Not everyday you get waited on by an Earl. I didn’t need to be asked twice. I could get a taste for it. Wonder could I get Lord Henry Mountcharles to knock me up some Buckfast ice-cream?