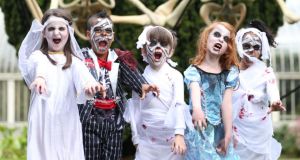 Halloween is right around the corner and there's plenty to keep the family on the spooky side of things over the midterm-break. Here are eleven events in Dublin and Cork.

Daily, 10.30am-6.30pm (Thursdays 10.30am-8.30pm), 30 one-hour shows a day; John’s Lane West, Liberties, Dublin 8; €22/€16 (families €55); vaults.live
Dublin’s newest visitor attraction, with its gruesome journey of horrors through Irish history, has opened just in time for Halloween. The €5 million interactive show, based on 800 years of Irish history, involves live performance and special effects to bring to life six scenes, including a Cromwellian torture chamber, the crypt of a Dublin church, a Viking settlement, Bandon courtroom, medieval apothecary and what was once Europe’s biggest red-light district, Monto, in the heart of Dublin. The scripts were first written by the late Fergus Linehan, the comic writer and Irish Times journalist and critic; the playwright Peter Sheridan created the final versions.

Wednesday, October 31st; 4.45-9pm; Ballymun Plaza, Dublin 9; facebook.com
The kids can channel their inner zombie at this year’s Otherworld festival in Ballymun, with lots of spooky stuff, including a circus, funfair rides and an arts-and-crafts tent. Witches Brew cafe will serve ghoulish cakes, tea and coffee, and Muck & Magic soup stall will offer deadly good homemade soup from vegetables grown on a community patch. The parade starts at the Virgin Mary national schools, on Shangan Road, at 4.45pm; the festival starts on the plaza at 6pm.

The Cauldron of Smithfield

The Haunted House in Rialto

Wednesday, 31st October, 3pm - 5pm; F2 Centre, 3 Reuben Plaza, Rialto, Dublin 8; free
The F2 Centre will be transformed for Halloween. Are you brave enough to face the ghost of Mrs Nugent in the basement of the haunted house or enter the Bride of Chucky room? If that’s not heart-stopping enough there’s also a graveyard with music and dance performances among the graves.

Runs until Wednesday, October 31st, 60-minute afternoon (ages four-plus) and evening (ages eight-plus) shows; Cuskinny Court, Cobh, Co Cork; €15; ghoulsleysmanor.com
I have it on good authority that the curse of the purple pumpkin has hit east Cork. That is to say Cuskinny Court has been hit by a 200-year-old curse, unleashing mischief and turning the estate home into a murky manor. “We’ve never seen anything quite like the curse of the purple pumpkin in east Cork,” says Caitriona Johansson of Ghoulsley’s Manor. “It’s quite spooky and funny to see the curse take hold, and we are inviting children to come and experience this imaginative, interactive Halloween experience this October.”

Thursday, November 1st, until Saturday, November 3rd, 2pm; the Ark, Temple Bar, Dublin 2; €12.50/€9.50; ark.ie
“Imagine this: you’re walking up a mountain, through a forest of pine trees, and you’re trying to find your dad. He’s been taken by a monster.” Meet Robin, a 10-year-old boy travelling through the magical woodland of his father’s storybook. A tale that is as true as it is untrue, from Bombinate Theatre, for ages eight-plus.