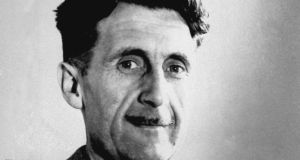 Next week, the works of George Orwell drop out of copyright in the UK and Ireland. The world is celebrating the incoming avalanche of new editions in the most disrespectful manner imaginable.

“The slovenliness of our language makes it easier for us to have foolish thoughts,” Orwell wrote in Politics and the English Language. “Never use a metaphor, simile or other figure of speech which you are used to seeing in print,” he further advised.

The word “Orwellian” isn’t exactly a figure of speech, but its current promiscuous misuse surely defies the spirit of that second dictum. It has come to mean everything and nothing. The slovenly imprecision has allowed any number of blowhards to pile foolish thought upon foolish thought.

We could fill a notebook as thick as Bleak House with misuses from the current American crisis. Senator Josh Hawley demands first mention with his riposte to Simon & Schuster for, upset at his attempt to question the 2020 election results, cancelling his upcoming book. “This could not be more Orwellian,” Hawley wrote on Twitter.

At the risk of being pedantic, it’s always possible for an alleged offence to be more Orwellian. The good people at Simon & Schuster could, referencing a scene from Animal Farm, have dressed up as pigs and urinated all over his first draft. But we get his vague drift.

Donald Trump jnr, a man not notably hemmed in by the Thought Police, was more specific in his response to Twitter’s suspension of his father. “We are living in Orwell’s 1984,” he yelled, uncensored on the same medium that was apparently imposing perpetual war on Airstrip One.

All these amateurs in the field of Orwell-speak must, however, bow to Sean Davis, co-founder of the Federalist, a web magazine for “lovers of freedom”. Prepare yourself. “Twitter won’t let you hashtag #1984,” he tweeted to his 332,000 followers. “There’s Orwellian and then there’s banning references to Orwell Orwellian.”

And then there’s the fact that Twitter doesn’t permit any numbers to be hashtags. Wait until the Orange Order hears that Twitter has banned #1690.

On the centenary of Orwell’s birth in 2003, the New York Times argued – surely irrefutably – that no adjective derived from a modern writer’s name rivalled “Orwellian” for visibility. “In the press and on the internet, it’s more common than ‘Kafkaesque’, ‘Hemingwayesque’ and ‘Dickensian’ put together,” Geoffrey Nunberg wrote. Yet, as the decades have progressed, the meaning has blurred to the point of being near-totally indistinct.

Something a little similar has happened to “Kafkaesque”. As long ago as 1977, Woody Allen had a foolish character in Annie Hall say, with a straight face: “Sex with you is really a Kafkaesque experience . . . I mean that as a compliment.” We still, however, grasp that, referencing just one among many common strands in Kafka’s work, the word has something to do with excessive bureaucracy (few connect it first with, say, giant anthropomorphic insects).

Too often “Orwellian” is used as the adjectival incarnation of “mean people are being mean to me because they’re mean”. Hawley, like so many, seems to be using it as a herald of incoming censorship. This doesn’t chime with how the word was initially used and, even if it did, that’s not what was happening at Simon & Schuster. At no point in human history has it been so easy to disseminate your thoughts to a wide audience. Donald Trump may be suspended from Twitter, Snapchat, Facebook and (hilariously) Spotify, but, even after leaving office, he will find some online medium to carry his petulant rants.

So what does “Orwellian” really mean? What should it mean? Unlike “Hemingwayesque” and “Dickensian” (but like “Kafkaesque”) the term is rarely used to reference the style or structure of the author’s novels. Confusingly, neither A Clergyman’s Daughter nor Keep the Aspidistra Flying are at all “Orwellian” in the sense we now understand the word. Orwell’s complicated politics – he was a socialist who hated the Soviet Union and who gave the foreign office a list of writers he deemed unsuitable to write anti-communist propaganda – has muddied efforts to identify which political extreme is being attacked in Nineteen Eighty-Four.

The word was, nonetheless, once useful in conveying how language can be distorted into an instrument of totalitarian control. “Don’t you see that the whole aim of Newspeak is to narrow the range of thought?” Syme says in Nineteen Eighty-Four. “In the end we shall make thoughtcrime literally impossible because there will be no words in which to express it.”

You know the sort of thing. Keep saying “lock her up” without satisfactorily explaining what crime has been committed. Yell “audit the vote” without providing evidence of why such a procedure might be necessary. You might be tempted to call the whole Trumpian movement “Orwellian” if the adjective had not been Newspeaked into near meaninglessness.

George Orwell might have enjoyed the irony. Then again, he might have told me off for misusing “irony”. He was strict about such things.