Does the scale of the universe make human life pointless?

Unthinkable: Reflecting on our place within the cosmos can be deflating 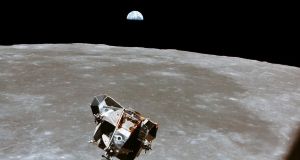 Should one feel gloomy for being so small within the cosmos? Photograph: Reuters/Nasa

Astronauts looking down on the “pale blue dot” where we live have commonly reported a kind of epiphany known as the “overview effect”. From space, the sort of troubles and preoccupations that once seemed important evaporate in a wider context.

But down on Earth, not all of us are so invigorated when we reflect on our place in the universe. “The more the universe seems comprehensible, the more it also seems pointless,” noted the physicist Steven Weinberg.

Our knowledge of the origins of the cosmos, while still limited, makes the existence of an all-seeing, compassionate God seem implausible. What’s more, it can make our everyday affairs appear pathetically trivial.

Should one feel gloomy for being so small? Nick Hughes thinks not. An Irish Research Council postdoctoral fellow at UCD, he believes any feelings of deflation are linked to a hankering after “causal power” – the ability to make things happen in the universe. But having such God-like qualities wouldn’t be as charming as you’d think.

“We have a tendency to treat power as though it is intrinsically valuable,” he explains. “We seek it out and covert it, irrespective of what it might get us or how we might wield it. Exhibit A: Donald Trump.

“But power isn’t intrinsically valuable. It’s only instrumentally valuable – valuable as a means to an end. And the ends that matter to most of us – our relationships, our shared experiences, the creation and appreciation of art and literature, and so on – don’t depend much on us having control over a vast but – to us – largely irrelevant universe.”

Cheer up, then, and don’t forget what’s worthwhile right in front of you. So Hughes suggests as this week’s Unthinkable guest.

If we’re alone in the universe, then it would follow that we are massively significant

Is an individual’s life insignificant in the great scheme of things?

“Guy Kahane [an Oxford-based moral philosopher] argues that intelligent life is the only source of value. If that’s right, and if we’re alone in the universe, then it would follow that we are massively significant. But only collectively; as individuals, you and I would still be crowded out by the fact that we are surrounded by billions and billions of others.

“If, on the other hand, the universe is teeming with intelligent life, then even humanity as a whole would be insignificant. As Kahane points out, in that case, whilst we would be a source of value, we wouldn’t be a particularly notable one.”

Why should reflecting on the nature of the cosmos make us feel insignificant?

“It certainly seems true that reflecting on the vastness of the universe and our tiny place within it can make us feel insignificant. I think this feeling is driven by a recognition of our relative lack of causal power.

“Here’s two reasons to think that: first, suppose that we were to have control over the trajectory of distant stars, the future of far-flung galaxies, and could bend and warp the course of the universe to fit our purposes. Would we then feel insignificant? I doubt it. The obvious explanation why is because we would have massively increased causal powers.

“Second, with a few exceptions, most of our predecessors had no inkling of the coming revelations of astronomy and believed that the Earth was at the centre of a rather small universe. There is little evidence that they felt insignificant in the way that we are liable to. This should come as no surprise if it’s recognition of our lack of causal power that’s driving the feeling; they would likely have seen themselves as wielding considerable causal power.

“A lot of people seem to find the idea that we are causally insignificant rather depressing. I don’t think they should . . . Most of what matters to us is here on Earth.”

Wouldn’t it make sense, though, to be deflated by the fact that we occupy a very small and brief place in the cosmos given that, in human affairs, we tend to value the big over the small, and longevity over brevity?

“Do we? Large things – mountains, planets, stars, galaxies – may be awe-inspiring, that doesn’t mean we value them especially, and many of the things we value most aren’t very big at all. Prince was only 5’ 3”, but I’d take him and his music over a huge but barren desert every time.

“That said, large things tend to have greater causal power than small things, though not always: think about nuclear fission. But as I said, I don’t think our lack of causal power relative to the universe should matter to us in the first place. So I see no reason to find it deflating.”

In general, the value of something doesn’t depend on it existing in perpetuity

Should I feel despair or take consolation from the fact that the universe as we know it will end? And how might one persuade me to choose one emotional reaction over the other?

“I can’t speak for others, but personally I have neither reaction. We and the things we care about will be long gone by then, so why should it matter to us in the slightest? Of course, one might think that if the universe ends, everything we have done will have all been for naught. But why think that?

“Pleasureable experiences are often fleeting, but they have value while they last. In general, the value of something doesn’t depend on it existing in perpetuity.”

Will a cosmos without humanity have any value?

“If there are other intelligent life forms out there, then surely it would be chauvinistic to think that a universe without humanity will lack any value. What would make us so special?

“If instead we imagine a universe without any kind of intelligence at all, then I’m inclined to agree with Kahane – it would indeed lack value. Still, there would be no one around to be miffed about the fact in the first place. So that’s something at least.”

Question: Why is there something rather than nothing?

Molly Bloom replies (from Ulysses): “. . . well who was the first person in the universe before there was anybody that made it all who ah that they don’t know neither do I . . .”