Culture Shock: The lights of the Peacock Theatre must not be switched off 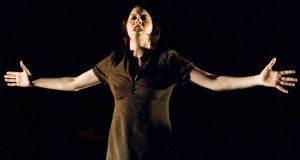 Success stories: Eileen Walsh in the Abbey production of Terminus, written and directed by Mark O’Rowe, at the Peacock theatre in 2007. Photograph: Ros Kavanagh

There is a campaign, in the crumpled city of Dublin, to take disused properties and re-energise them with artistic occupation. The idea has swelled in the five years since the birth of Nama, the appearance of unfinished complexes and idle headquarters, and the haunting of the landscape by ghost estates. The rationale is that cities need life and that the arts need a home. If it’s not a win-win, at least somebody has a place to draw.

Dublin City Council has presented this as a way of regenerating areas, seeing vacant spaces as a threat to civic health, like the famous broken-windows theory: leave one unmended and others will follow. There goes the neighbourhood.

A couple of weeks ago the State-owned Digital Hub proposed to allow artists into its unused buildings, but perhaps this movement of bringing art to derelict spaces could begin more modestly.

Let’s start with the Peacock Theatre.

It may seem harsh to label the National Theatre’s studio space as derelict. After all, tonight you can see the closing performance of Pat Kinevane’s solo work Silent, which concludes its month-long residency. But that production for Fishamble: The New Play Company brought the Peacock’s entire programme for 2013 to a total of just 11 weeks. And Silent, which debuted nearly three years ago, has already toured extensively around the country, including a two-week run at the Peacock last year. When a theatre has no production on stage, it “goes dark”. The Peacock has not been bright for a long time.

Set up in 1927 as a small stage for experimental performance, when the freedom and ambition of the Abbey became laden with the responsibilities of State subsidy, one of the Peacock’s first and most enduring creations was another theatre: the Gate. For the Gate’s inaugural production its founders, Micheál Mac Liammóir and Hilton Edwards, decided to stage a production of Peer Gynt, with a 48-person cast, in a theatre that could then sit 102 people. Nothing about it made sense, yet the restrictions of the venue helped to mint the Gate’s style. “The very limitations often proved an advantage,” Edwards wrote years later. They next staged Oscar Wilde’s Salomé in the same theatre, and long before they moved to the theatre’s current home, in 1930, the Gate had established a taste for modernist design and European expressionism by the hearth of the Abbey’s rural Irish repertoire. Dublin theatre may have been split between Sodom and Begorrah, as the old joke went, but the Peacock was an extraordinary space where the two could meet.

The Peacock’s more recent history has been as a stage for some of the national theatre’s most important work and as an incubator for its most important talents. Before he became the youngest director of the Abbey, Joe Dowling was director of the Peacock. Frank McGuinness’s first success was with The Factory Girls in the venue in 1982. Tom MacIntyre and Patrick Mason’s groundbreaking collaboration on The Great Hunger, one of the seminal moments in recent Irish theatre, began in the Peacock the following year, and both it and its influence travelled far. Garry Hynes created an ensemble of actors for the space during her tenure and introduced Derbhle Crotty and Aisling O’Sullivan to the profession.

And the biggest successes of Fiach Mac Conghail’s tenure as director of the Abbey started there: Mark O’Rowe’s Terminus, Sam Shepard’s Kicking a Dead Horse and Ages of the Moon, Carmel Winter’s B for Baby, Nancy Harris’s No Romance and Owen McCafferty’s Quietly. It’s easy to see what’s happening to new playwriting and new talent as it stays fallow. It’s horrifying to consider what isn’t happening.

So why is it closed? The simple answer is money. Since 2009 the Abbey Theatre’s Arts Council funding has shrunk in line with the nation’s dwindling finances, falling from €10 million in 2008 to €8.35 million in 2009, €7.5 million in 2010 and €7.1 million in 2011, at which level it has since stayed. The Abbey was rescued from huge debt in 2005, when a newly appointed Mac Conghail secured €4 million from the government, and he will never allow the theatre to fall into debt again. This leaves it in the strange position of being a model of fiscal rectitude in a bankrupt nation. It also means the theatre’s production rate has suffered: this year only two Abbey productions were staged at the Peacock, Eamonn Morrissey’s Maeve’s House and a short run of two 20-minute sketches, Love in a Glass Jar and Ribbons. In 2009 there were six.

This situation seems to upset few people as much as Mac Conghail, who last year explained his ambition “to keep the Peacock full and packed with work. I want that to be new Irish plays by our Abbey-commissioned writers, and I also want to invite companies in that I think are interesting.”

With the Abbey’s programme for 2014 yet to be announced, and State subsidy for the arts overall down 7 per cent from last year, this dire situation needs radical thinking, such as the appointment of a Peacock director, an equitable budget split between the two stages, or a broad invitation to other companies to keep the space in use. Consider the damage to the Abbey’s repertoire, and to Irish theatre, if the situation goes unmended: a broken-theatre theory. Save the Peacock.