Culture Shock: Art’s meant to be about all of us, not just middle-class white men

Ireland’s galleries almost all reflect western European and North American culture, but that’s not what our society looks like any more 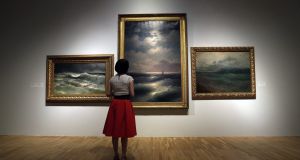 Biased: national collections give context only to a certain type of work by a certain group of artists. Photograph: EPA

Museums can be comforting places – if you happen to be middle class, male and white. The traditional model of the museum offers a sense of standing at the apex of history’s sweep while presenting the collections of the ruling classes for theoretical and emotional back-up.

In today’s less culturally certain times museums are having a crisis of conscience. The papers at the Irish Museums Association conference earlier this year, which was subtitled Towards a Cultural Democracy, questioned pretty much everything from definitions of expertise to mechanisms for inclusion and, of course, the collected objects themselves. These conversations are gathering force, but art museums are only beginning to join in. This is incredibly important, because it is what is in our collections that shapes the controlling narrative of what art actually is.

In his book You May Also Like Tom Vanderbilt explores what he describes as taste in an age of endless choice. One chapter is dedicated to the way Netflix ignores what you say you like, to make better, if less flattering determinations based on what you actually watch (which translates as skipping Hotel Rwanda for another binge on The Vampire Diaries). In another he analyses the impossibly injured sensibilities of TripAdvisor reviewers.

Vanderbilt also takes on the question “How do we know what we like when it comes to art?” His researches encompass a fascinating series of social and neurological experiments, including a Belgian study in which a work by the respected Flemish artist Luc Tuymans was installed on a pedestrian street. Despite a panel of experts declaring in advance how strongly the art would affect its new audience less than 4 per cent of almost 3,000 passers-by stopped to look. Outside a gallery or museum, competing with the rest of the noise of the city, the Tuymans was invisible. “Content,” writes Vanderbilt, “swims lost without context.”

The problem is that our national art collections, together with the art market and most major exhibitions, give context only to a certain type of work by a certain group of artists. And context counts. In the 1990s a psychology professor, James Cutting, explored how we tend to prefer familiar works. Repeated exposure “proves” to us that Van Gogh’s Starry Night and Monet’s Water Lilies are “great” works of art.

What Cutting did was show how if you take a work by, for example, Monet that is in the public domain through being in a major collection, and hence frequently illustrated in art books, alongside another Monet that, by dint of being in private hands, is more or less unknown, people initially prefer the famous work. Show them the second work repeatedly over time and those preferences balance out.

Cutting also discovered that familiarity does not always breed favour. He showed a series of lesser-known works by John Everett Millais and a number by the prolific American painter of kitsch Thomas Kinkade (the only artist “who ever let his name to a La-Z-Boy recliner”). The subject matter and palette of the paintings were roughly similar, but over time people liked the Millais works more and more and Kinkade’s less and less.

Most people had liked Kinkade more in the beginning. Think of it like marshmallows: the first bite is all sugary deliciousness, but it’s very easy to overdose and never want to see another one again.

These experiments show that exposure enables us all to make choices about what is, and isn’t, “good” art. Works in museum collections not only offer that exposure but also provide benchmarks for assessing art that we then encounter elsewhere.

The trouble is that our museums show an almost uniformly western European and North American canon of art. Without the opportunity for familiarity with other aesthetics it’s hard to judge art that is expressive of the patterns, stories and concerns of other cultures.

It’s not as if those aesthetics are “lesser”: when artists from dominant cultures appropriate other forms they are frequently hailed as creative heroes. Pablo Picasso and Henry Moore’s adoption of “primitive” forms were seen as triumphs of modernism.

We also have a history of relegating art from other cultures to different sections of our collecting institutions, and in the process we narrow the field of vision for what contemporary art can and should be – a universal expression of human experience. In the “emergence of aesthetics” chapter of The Tell-Tale Brain the neurologist VS Ramachandran invites us to consider “putting Picasso in the anthropology section of the national museum in Delhi”. And if that seems an impossible thought, then imagine where our encounters with early Egyptian, African or Indian art tend to take place.

Belatedly, some institutions, including Tate Modern and the Met, are trying to make changes, and it’s a vital project. Major museums don’t simply reflect; they also influence. Ireland’s galleries and studio groups are almost all reflective of that western European and North American culture, but that’s not what our society looks like any more – and it’s not what art should look like, either.