Culture Night set to be biggest ever with more outdoor events 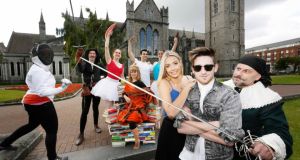 Visual arts in Limerick’s dormant shop windows, drive-in movies at Smithfield and tours of Áras an Uachtaráin are among the many new events announced for the State’s biggest ever Culture Night.

There is an increased focus on interactive and outdoor events for the September 19th programme of events which was published today.

“The focus is on interactive and family based events. The whole idea of Culture Night is to open it up to all ages, even though at night,” said Culture Night co-ordinator Aimee Van Wylick

“We are encouraging locations to do outdoor events as well, to bring culture out into the streets,” she said.

This year is set to be the biggest programme since it began as a Dublin-only event in 2006. The national night has expanded to 36 towns and cities with Monaghan, Lisburn in Northern Ireland and Dun Laoghaire Rathdown added to the mix this year and more than 900 venues participating.

Dun Laoghaire Rathdown will see Airfield farm and food experience in Dundrum take part for the first time as it opens to the public for free . Outside the Capital, a guided bus tour of Kerry’s master craft makers at work, a short story festival in Cork and a gigantic drum circle in Belfast are among the many new highlights .

For those looking for a taste of the Downton Abbey lifestyle many of the State’s major country houses will open their doors to the public including Westport House in Co Mayo and Russborough House in Co Wicklow. There will also be a candle-lit tour of Strokestown Park House in Co Roscommon.

Dublin will see the return of ever-popular venues such as the Freemason’s Hall and the Houses of the Oireachtas. Culture night-goers can also visit Dublin’s oldest working charity The Mendicity Institution, enjoy installations and talks at Merrion Square’s illuminated Georgian basements or catch a musical performance at the Windmill Lane Studios synonymous with U2.

RTE Concert Orchestra will also perform in Meeting House square, there will be a specially exteneded RTE Radio Arena programme while RTE’s Two Tube will be live on Grafton St.

For Dublin culture vultures who want to see more than one venue there are Culture Night tours on foot and a bike tour. Dublin Bus has added an additional free route to its free transport programme to cater for the president’s house and Farmleigh.

Ms Van Wylick hopes the audience will exceed the 350,000 achieved last year. She put the demand down to the positivity a and good will around the event, as well as its openness and not to mention that everything is free.

The event is “special” for people because events are at night and they can combine places that are usually open with those not usually open , she said.

Minister for Arts Heather Humphreys encouraged “everybody to come out and enjoy their local theatres, dancing , music , book reading”. “Sometimes the simple things in life that are free are often more rewarding than something costs a fortune,” she said today.

Culture Night , September 19th, some of the highlights

Áras an Uachtaráin and Farmleigh: President Michael D. Higgins opens his official residence on Culture Night for the first time with ticketed guided tours of the 1751 residence. The official State guesthouse at Farmleigh will also open for tours .

Windmill Lane : For a peek inside the recording studios which have hosted U2, The Rolling Stones and Lady Ga GA, attendees are invited to sit in on a special live performance.

The Mendicity Institution: visit Dublin’s’s oldest working charity and taste the food of the 1820s and see the records and artefacts

TOG: Visit this creative hub where hackers work on projects in old and new technologies. See projects and even take a workshop.

Downstairs Dublin at Merrion Square :The Georgian basements will be lit up for a night of installations projections and pop-up events, curated by The Irish Times.

La Catedral Studios: A chance to visit the art work space encompassing 24 studios where visitors can visit the artists and see work in progress

Drive-in movies at Smithfield Square : The Mission and Whatever Happened to Baby Jane will be shown on th big screen

Sea Shanties, Moran Park, Dun Laoghaire: Songs from the High Seas,brings performances of songs that might have been sung on a voyage inspired by traditional shanty lyrics.

Cork, The Atrium, New Civic Buildings : An exhibition by Daragh Williams will be made of flour and laid on the floor and will fade away over the course of the night.

Galway: Literature night at Charlie Byrne’s bookshop, A series of readings over six hours as every Galway author who has had a book published in the last year is invited to read for five minutes.