Covid-19: Galway Capital of Culture year may to extended into 2021 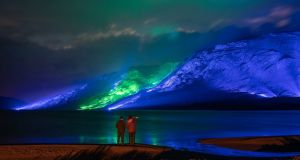 Savage Beauty is an illumination by Finnish light artist Kari Kola of an entire mountain at Loch na Fuaiche in Connemara. It has never been viewed publicly.

The Galway 2020 board will have an emergency meeting on Tuesday to consider the future of its European Capital of Culture year, in the face of the ongoing coronavirus crisis.

It is believed one of the options being considered is to seek to extend the capital of culture year beyond 2020. If this is considered it would have to be discussed and agreed with the European Commission, which oversees the project.

The volunteer board of 15, chaired by film producer Arthur Lappin, and including Galway City Council chief executive Brendan McGrath, will meet remotely to decide what approach to take if, as seems likely, public gatherings continue to be banned after March 29th.

Options that may be considered include postponing some elements of the programme until later in the year, or presenting some projects in other ways, including online.

It’s understood Galway 2020 came up at a teleconferenced meeting last Thursday, where Mr McGrath briefed councillors on the city’s Covid-19 response. In answer to queries, he said Galway 2020 decisions were a matter for its board and would be discussed at the emergency meeting. There was speculation about the viability of carrying some of the programme over into 2021, beyond the project’s scheduled end on January 31st, 2021, and it was suggested the conversation with the commission had started.

This month’s shutdown of public events comes after a run of bad luck for Galway 2020 Capital of Culture, including the cancellation of an opening spectacle in the city on February 8th, because of Storm Ciara. The ceremony was to be the culmination of a week-long series of fire-themed events that had taken place across the county over the previous week.

After Galway 2020’s weekend of International Women’s Day events, and its showcase for Britain’s Duke and Duchess of Cambridge on their visit to Galway on March 6th, Government guidance to contain Covid-19 on March 12th led to cancellations and postponement of a tranche of Galway 2020 events.

Cancellations included the large-scale Branar Theatre installation Sruth Na Teanga, transforming the former Galway airport to tell the story of the Irish language, and Savage Beauty, an illumination by Finnish light artist Kari Kola of an entire mountain at Loch na Fuaiche in Connemara; the light artwork could not be publicly viewed but was filmed and presented online.

Today Music for Galway also announced postponement of two Galway 2020 projects: Passio, a concert rescheduled for April 2nd, 2021; while the extensive Cellisimo cello festival due to be held from April 25th to May 3rd, will also be rescheduled for some time in 2021.