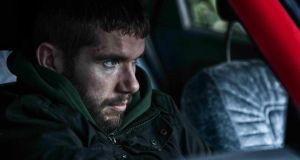 Award-winning TV crime drama series Corp+Anam is set to return to our screens for a much-anticipated second series (TG4, 9.30pm).

The first of 4 episodes - which are based on the exploits of crime reporter Cathal Mac Iarnáin - follows Mac Iarnáin (Diarmuid de Faoite) as he sets out on a personal crusade against the Irish judiciary while, in the background, his marriage to Mairéad (Maria Doyle-Kennedy) flounders.

The creators say the second iteration of this highly successful drama series will shine a light on one of the darkest corners of our society - and is likely to ruffle a few feathers along the way.

Written and directed by Darach Mac Con Iomaire and produced by Magamedia, the second series has already been nominated for an award at the prestigious Prix Europa Awards due to be held in Berlin in October.

Mac Con Iomaire says he hopes viewers will recognise “the truth” in the stories that are told in the course of the series which has been described as a “Celtic noir thriller”. “The best way to tell people the truth is to put it in a story,” he says.

The series “interrogates the news industry and the blurred ethics at play where the schedule is king and the crime victim is much lower on the food chain,” he adds.

The first series, which aired to much acclaim in 2011, won numerous awards including at the 2012 IFTAs and the top award at the 2012 Celtic Media Festival

Fans of the first series should not be disappointed as producer Paddy Hayes promises the second series will not only be “part edge-of-your-seat thriller, part legal drama” but one that also “plunges the knife into some sacred cows in Irish society”.

Leading man, Diarmuid de Faoite, says of his role: “In series two, Cathal takes on the legal world, and fights against its hidden game playing and overt manipulation. Darker and pacier than series one, it’s been an intense shoot but I believe the quality of production and performances speaks for itself.

“We have endeavoured to tell great stories and, though exposing the dark underbelly of Irish society is never easy, Darach Mac Con Iomaire has shown great tenacity and courage in doing so over the last two series,” he added.