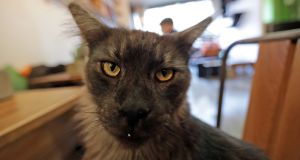 How often does a short story capture the hearts and minds of the internet? If you were to ask that question to someone who writes short stories, you might hear back a strange, hollow laughter and, perhaps, a plea for some money.

There was a time when the writerly elite would map the frontiers of the human condition with a well-spun yarn about a country funeral, or a half-glimpsed boat to the US and have it read widely in popular collections or newspaper syndication. The best short stories distil a novel’s worth of drama, intrigue and social commentary into a narrative so short you could digest it in one sitting, or even enjoy it while on your way to, say, attend a funeral in the country, or cast half a glance toward an American boat.

But these days seem long past, so it was remarkable that this week’s biggest internet touchstone was Cat Person by Kristen Roupenian, a story in the New Yorker that proved as viral, debatable and divisive as any cultural offering of recent months.

Cat Person centres on a brief, romantic interlude in which 20-year-old Margot has bad sex with 34-year old Robert, the story’s titular cat person. The piece isn’t packed with firecracker prose or spectacular events, but rather small moments of excruciatingly well-bottled realism as she seems to convince herself she might like him, and attempt to continue doing so even when they’re having the aforementioned terrible sex. The majority of the reaction online has been on how “true” and “universal” the story is, and of its ability to reflect something “every single woman” would find relatable.

“The man in cat person is much less interesting to me” said @negaversace, one of hundreds of thousands of commenters, “than the mental gymnastics of a young woman attempting to alchemize enjoyment out of a dismal situation”.

It’s these moments that Cat Person gives real life to; Margot twisting her inner thoughts out of consideration for a man’s expectations, all the while conscious of the potentially violent effects that damaging a near stranger’s ego might entail. This latter consideration is a recurring point of reference for fans of the story, such as @evacide, who summed up the story’s appeal thusly: “men and women don’t understand each other” she wrote, except “the consequences for women are very different from the consequences for men”.

Almost immediately came dissenting points. Most common of all were bemused, confounded or downright angry men who didn’t understand what all the fuss was about. These eventually became so numerous that an account, @MenCatPerson, was set up to document their increasingly heated and baffled responses, quickly becoming an internet sensation of its own.

With acrimony flying everywhere, and discussions of whether the piece was shallow, fat-phobic, misandrist, un-feminist, or whether its cover image of a close-up stubbly kiss was the real sinner of the whole deal. In any case, by Wednesday, within three days of being discovered by the internet’s critical mass, Cat Person discourse appeared to have been expended. Even @MenCatPerson shut its doors, leaving comedian Aparna Nancherla (@aparnapkin) to give perhaps the perfect send-off for such a tricky, divisive and difficult debate: “My condolences to any burgeoning new relationships about to have a discussion about cat person.”