Carlow Arts Festival: Wide awake to the virtual and the real 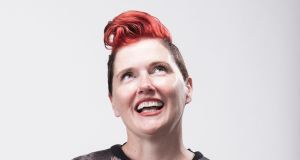 Programming a festival is like putting a selection box together. You’re trying to find the right mix. Everyone loves the salted caramels, but what about those with a soft spot for cherry liqueur? And what if you’d like to introduce new devotees to your own niche favourites? Without stretching the analogy too far, festivals are the ultimate pick’n’mix and, with the strength and depth of work being made in Ireland and internationally right now, programmers are spoiled for choice.

If all that sounds too perfect for words, the utopian dream of ranging the world for class acts comes crashing down with just two words: budgets, and weather. Carlow Arts Festival director Jo Mangan is positive about both. “I’m deeply optimistic about the weather when it comes to doing a festival that’s mainly outdoors in Ireland,” she says, when I meet her just 10 days ahead of kick off.

What’s occupying her and her team more is the question of getting a cello to Ireland on a British Airways flight. It’s one that must afflict many travelling musicians. Ryanair, I am told, are pretty easy when it comes to booking a spot for your beloved (and perhaps priceless) instrument, but BA are proving trickier. The cello is for one of the members of the Max Richter Ensemble which, alongside soprano Grace Davidson, will be bringing Richter’s extraordinary eight-hour composition Sleep to the festival for its Irish premiere. It has previously been performed at venues from Grand Park in Los Angeles, to the Sydney Opera House.

Mangan came across Sleep at South by Southwest, the massive film, interactive media and music festival that takes place each March in Texas. “I hadn’t gone with a programming hat on, but I have a broad interest in technology,” she explains. “I’m interested in virtual reality, augmented reality, mixed reality – things that can add to the live experience, not replace it. I had gone because I want to get up to speed. I don’t like to be left behind.”

It’s hard to imagine Mangan getting left behind for long, if at all. Director at the Carlow festival since 2016, she also has her own theatre company, The Performance Corporation, works as a director and curator, and was, until last year, chair of the National Campaign for the Arts. She tells me she has spent the last few days answering the door to politicians seeking local and European election votes. “I’m probably the first person they met, whose first question was about arts funding,” she says.

At South by Southwest, Sleep was performed on camp beds under the night skies. “I spent the most extraordinary eight hours ever,” Mangan says, her green eyes wide with the memory. Her purple and red hair is done up in a cool quiff, and she gestures extravagantly as she speaks. There is an air of enthusiasm and fun to her, but I imagine she is also capable of being steely and highly driven when required. Was she ever an actor? I ask. “I’m a shocking actor,” she says with a smile. “I’m a real over-actor, I’m a much better editor and director than a performer.

“I spent the night between wakefulness and sleep,” she continues, going back to Richter’s Sleep. “And every time I was woken by the swell of a cello, or the bass reverb coming through the speakers, I cried. Then I drifted back to sleep again.” At Carlow, those with tickets for Sleep will be sheltered by pink tents. “We have the beautiful Visual building, where Emma Lucy O’Brien has curated the visual arts, but we try to do most of the festival out of doors.

“Perhaps,” Mangan muses, “it’s insanity to think it could happen in Carlow.”

But that type of insanity is what makes a good festival great. The ethos of the Carlow Arts Festival is to make as many of the events as possible free of charge – 80 per cent this year. And while some do have an admission charge, a Pick Your Price tag on many allows those booking to choose from a sliding scale of costs.

That’s where we come to budgets: as with all festivals, the programme is subsidised by the local authority, the Arts Council, by sponsors and through a constant drive for donations. “When it comes to the arts,” says Mangan, “there’s a well-worn belief that if things are free, people don’t value them, but that’s not true.” Instead, she says, the festival is growing, and becoming more diverse.

“At its core, it’s outdoors, street art, spectacle and circus. Everything else is wrapped around that.”

But Carlow’s programme also reflects the passions of its director, so there’s a hefty dose of new technologies and virtual realities in the mix.

Taking place over an intense six days, the Carlow programme packs in a diverse feast of treats, some are fun and many are family friendly, including the free outdoor screening of The Muppet Movie (Friday, June 7th), which was first released in 1979, the year the festival also made its debut. There are also more challenging and thought-provoking events stitched in, such as Kaleider’s PIG, which is being programmed in partnership with the Cork Midsummer Festival. The large transparent pig sculpture, a literal piggy bank, will appear at sites around Carlow and, later, Cork.

“You can put money in, but you can also take from it,” Mangan explains. “In a way, the money isn’t the important part. The conversations that come with it are the thing.” Seth Honnor, the artistic director of the UK company Kaleider, is clearly fascinated with how cash works, their show The Money, which featured at the Dublin Fringe Festival in 2016, asked audiences to become Players, deciding how group donations should be spent.

“Speaking to Seth,” says Mangan, “a young soccer team came along in Hull and asked ‘can we take money for jerseys?’, and those around PIG agreed. In another venue, some homeless people wanted to take money out, and people said ‘that’s not for you, it’s for the community.’ There’s already chatter about its demise, but I’m more hopeful.” From PIG to a free programme of arias and duets from Irish National Opera on Sunday (June 9th); to Children’s Island, an interactive play hub for children from 18 months up (Saturday and Sunday June 8th and 9th); to Crave #2, in which performance artist Eja Dueln investigates sex work (Friday June 7th); the programme is diverse and rich.

A criticism of arts policy and programming, made by the late UK writer and thinker, John Willett, has been that arts councils and programmers are “trying to find takers for the kind of art that they themselves enjoy”. “I want to get people to see the thing they maybe wouldn’t have planned for,” counters Mangan, which makes me wonder why some, myself included, may be resistant to the new, the different, the strange or other. Perhaps it’s because it’s uncomfortable to consider giving up deeply held positions and beliefs. Arts programming also, however, has to open up to things that don’t necessarily look like the cultural elites have previously expected art to look like.

It also has to free itself of roles imposed by funders and policymakers. “Whilst I firmly believe the arts can have a transformative affect on individuals, I don’t think the arts is a panacea for all the difficulties of a town, a city or a country. That’s not our job. It’s not our job to enliven a town year round. That’s not a festival, that’s a theme park. A festival is momentary, it is ephemeral, it is a moment in time when you can just leave your day to day life behind.

“I have an ambition about legacy and lingering,” concludes Mangan. “It’s not about having visitors coming to town and filling beds. It’s either about parents in 10 years’ time, holding their heads in their hands as their children tell them they want to work in the arts. Or saying ‘that’s amazing, I’m delighted. Working in the arts you’ll be able to get a mortgage, own a car . . .” Either way, come to Carlow and sow the seeds.

Coming to Carlow? Sleep is sold out, but don’t miss:

Virtual Reality Cinema: discover the future of cinema as a selection of VR films wrap around you in a curated programme for 10 people at a time. Saturday and Sunday June 8th and 9th. Age 13+ Free but ticketed.

Friday Night Filth: theatre, cabaret and circus acts from the festival come together for a spot of sauce. Including the Lords of Strut, Horsebox Theatre and Angelique Ross. Friday June 7th. €15.00.

Sugartown: Celebrating the festival’s 40th birthday, and created by Dina Abu Hamdan in collaboration with the people and communities of Carlow, this evening of music, dance and stories culminates in an explosion of fireworks. Saturday. Free.

Chagall: Hear, and see the future as this Amsterdam-born, London-based singer, songwriter and performer controls the concert via sensor-enabled MI.MU Gloves. Saturday. Free.

VR Graffiti Workshop: Shane Sutton’s virtual graffiti workshop, aimed at teenagers, lets those from 13 and up spray to their heart’s content on virtual walls. Saturday. Free but ticketed.

Dancing with the Stars: public save rhythmless reverend Ray Kelly as Yewande Biala voted off
2

The long history of linen-making in Ireland
7

Dancing With The Stars 2019: Jennifer Zamparelli and Nicky Byrne’s zero chemistry a turn-off
9