Paul Muldoon: On My Culture Radar

The Pulitzer Prize-winning poet on his love of Derry Girls, Glen Hansard’s new album and Etto 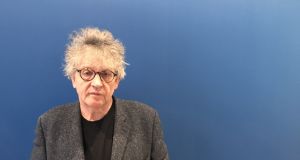 Paul Muldoon: ’Not many popular songwriters show as much care as Glen [Hansard]’.

Ciaran Carson’s From There to Here: Selected Poems and Translations. I’ve known him for 50 years exactly. We met in 1969 as students in Queen’s University in Belfast. He’s someone I admire so much. He’s quite remarkable in his ability to find connections in so many aspects of the world; it’s one of the things that a poet does, but he does it with extraordinary ability.

Glen Hansard’s This Wild Willing came out recently and I’ve been enjoying it a great deal. The structure of the songs like Don’t Settle is beautiful. Not many popular songwriters show as much care as Glen. I’ve been a fan of his work for a long time, I was a fan of The Frames, and obviously he’s had a great solo career since - I loved both the musical and film of Once. I live in New York and had the pleasure of sharing a stage with him in Carnegie Hall. I did a spoken word piece. You know that old joke? “How do you get to Carnegie Hall?” “Practise, practise, practise”. I’m not sure how I got there but it was a treat.

I’m not sure if I’ll get to see it, but I want to see Baoite by Darach Mac Con Iomaire which is just finishing at the Peacock in Dublin. It’s an Irish language play but my Irish is not as good as it should be, so I’m glad to see there are subtitles in English. That might be troubling for some purists, but I think it makes a lot of sense. The play about the impact of fracking on a fishing community, so it’s up to the moment and it’s good to see a play in Irish taking on issues like this.

Etto on Merrion Row is a fabulous restaurant. I was in Dublin recently and I walked in and they happened to take me. I went back three nights in a row after that, I think they became fed up looking at me. At the time, I had no idea it was quite as award-winning. The dinner menu has unfussy and honest dishes like braised duck heart, smoked eel and I’m fond of their burrata. I love the Pearl Brasserie and Bang too.

I’m looking forward to watching Greta by Neil Jordan. I have no idea exactly what this is about, but I don’t really care. The fact that Neil Jordan is involved means I’m going to see it. One knows it’s at least going to be interesting. I think he’s a poet in many ways.

Derry Girls. I was on an international flight recently and a woman a couple of rows ahead of me was laughing her head off, and I had to go and sneak a peek at what she was looking at, and it turned out to be Derry Girls. That’s an indicator of how hilarious it is. I was brought up in Northern Ireland and went to a Catholic all-boys school where there was a convent school attached, and they’ve really got their antics down. It’s excellent work. Without making light of its backdrop of the Troubles, it introduces a little levity into what is a heavy subject matter. It’s also an indicator of how humour can take the edge off things.

My favourite comedian is Larry David, the star of Curb Your Enthusiasm. He’s someone I think is quite masterful.

I love going to Reykjavik. I often stop there between New York and Europe, and spend a day or two lying in a thermal pool or doing a bit of horseback riding. The little Icelandic horses are fabulous. It makes the journey quite long, but it’s worth it – it’s a beautiful setting and an interesting place.

I enjoyed Glenda Jackson in King Lear when I saw it in New York. At no point was I thinking ‘this is Glenda Jackson as Lear’ as one tends to think when great stars take on the big roles, I simply thought I was seeing King Lear. The New York Times reviewed it and was dismissive of it. It made me think about the number of scathing theatre reviews one reads. I was quite troubled to read it actually, because it’s such a good play that can’t be done badly.

Paul Muldoon begins his European appearances at the Smock Alley Theatre, Dublin, on Sunday May 26th, as part of the International Literature Festival. See paulmuldoonpoetry.com for further dates