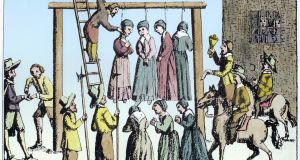 “Historically, the term ‘witch’ has been used to describe people, primarily women, who refuse to conform to society’s expectations of who they should be.” When lines like this appear in TV shows for the preteen set (in this case, the recent Netflix adaptation of The Baby-Sitters Club), it’s clear the idea of witches as feminist icons has gone mainstream. (See also: Taylor Swift.)

Witch can now serve as shorthand for a whole range of activities, practising Wicca to lighting the occasional scented candle; in its ubiquity it becomes cosy, unthreatening. We might even begin thinking we live in a world that doesn’t penalise women disproportionately for stepping out of line.

The softening of the witch archetype is welcome in so many cases, with retellings like Wicked inviting us to empathise with the villains, but sometimes – particularly around Halloween – you just want (fictional!) angry, powerful women seeking revenge against those who have wronged them. “Too long these men have made me doubt, made me weep . . . Swear, we will fight against those who try to trap us, to hurt us, to kill us!”

Finbar Hawkins’s debut, Witch (Zephyr, £12.99) takes us back to 17th-century England, with Evey vowing to avenge her mother’s death at the hands of witch-hunters and abandoning her younger sister in the process. There is real magic here, though what leaps off the page is the creepy atmosphere and the raw emotion of a grieving, raging girl. “I tasted his blood on my black tongue, such sweet revenge.” Perfect reading for a dark, stormy night.

If wicked witches have been mostly redeemed, fictional cheerleaders are still allowed to be evil; I initially found myself convinced that the five dead girls in Kara Thomas’s The Cheerleaders (Macmillan, £7.99) had done something terrible and were being punished for it. (In books, groups of teenagers are so often involved in mysterious deaths that must then be covered up.)

The story Thomas deftly reveals, however, avoids that trope and provides a more nuanced take of life in a small town, and the steps that led to those deaths five years ago. Narrated by the sister of one of the victims, determined to prove it was murder and not suicide, the amateur investigation unfolds slowly but satisfyingly. There’s nothing supernatural here – this is one for readers who like their monsters all too human.

The aftermath of suicide is also explored in Bill Konigsberg’s The Bridge (Scholastic, £7.99), with four possible timelines presented to the reader after two teenagers meet on a bridge with the intention of jumping. What might survival look like for one or both of them? What will it be like for those in their lives if they die?

At first, this sounds like a gimmick with the potential to be distasteful, schmaltzy or both. Konigsberg manages to pull it off by never dismissing his characters’ feelings; Aaron “can’t imagine withstanding this hole in his chest even a moment longer” while Tillie “literally did not know what else to do with the pain so deep down in her throat, the pain that sometimes feels like a string is pulling her shoulders down from the centre of her gut.”

So while it’s true that we see, in three of the four timelines, the powerful grief that the characters’ family and friends experience, this is emphatically not a guilt trip. Nor does Konigsberg suggest that everything is instantly all right if one attempt is averted; the path to recovery is rocky and unpredictable. There’s humour, warmth and hope in here alongside a hand stretched out in solidarity to anyone suffering.

Poet Nikita Gill has a similar message to convey in The Girl and the Goddess (Ebury, £12.99), reassuring readers: “It’s okay to feel / like you’re drowning / inside your own bones sometimes.” As Paro grows up in an India still traumatised by the legacy of colonisation and partition, she experiences the small and large hurts that come with being female. Her mother tells her that “Girl is not a dirty word… Girl is fury” but it’s not that simple, particularly when Paro falls for a girl at school.

This is Gill’s first verse novel, and although she’s used old stories to explore contemporary womanhood in her poetry previously, her engagement with Hindu deities here is more sustained, propelling the narrative and allowing Paro to carve out her own particular space in her native tradition. While “goddess” is another term that’s had its power sapped from overuse, the tales woven throughout remind us of its true meaning.

The individual poems are sometimes a little didactic, with a touch of fridge-magnet-wisdom about them (part, though not all, of Gill’s success is down to her sharing of her work in digestible snippets on Instagram), but they add up to a moving, layered story that is ultimately served well by this form.

Finally, novelist Ayesha Harruna Attah makes her teen debut in The Deep Blue Between (Pushkin, £7.99), a tale of two twin sisters separated when their village is “crisped to the ground” in a raid. It is the 1890s, and slavery is technically illegal, though its legacy lingers.

On the Gold Coast of west Africa, Hassana feels “as if we were always getting a bad deal with the Europeans” and becomes involved in political campaigning; in Brazil, Vitória discovers what it means to receive the gods during ceremonial dances as part of her initiation into a hybrid religion that originated as a result of the Atlantic slave trade.

Still bound together by shared dreams, both girls yearn for reunion even as they grow beyond being defined by their other half. This is a memorable, evocative tale of sisterhood and identity.