Thanks to Covid-19, all this writer’s plotting and planning might now be irrelevant 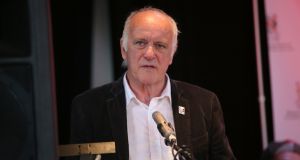 Planning his own funeral: ‘Many a long-distance drive or evening walk was spent in consideration of the music, the words, the running order, my final gig, and each of those journeys was a time of pleasure,’ writes John MacKenna. File photograph: Laura Hutton

When I hit 50, which was neither yesterday nor the day before, I began planning my funeral. It seemed an appropriate thing to do. Since early adulthood, I’d had a sense that my years were numbered at 52. A random figure – and I have no idea where that number came from. But there it was. I even went to the trouble of recording the music and the readings I wanted for my funeral service. The recording still sits in the top drawer of my desk.

I didn’t have a 50th birthday bash. Instead, I held off on the celebration until I hit my 53rd birthday; the imminent storm had passed as a light breeze and I was free to get on with my life. But I continued with the planning of the last great event of living or the first of the hereafter. Pieces of music came and went from the list: Pachelbel’s Canon (violinist/cellist required – take note!); Leonard Cohen’s If It Be Your Will (too popular, now, at funerals); Family by Pierce Pettis (still on the list).

And then there were the readings: though my tendencies are agnostic, I have a soft spot for The Lord’s Prayer and there has to be a Raymond Carver poem and something from John Stewart Collis’s The Worm Forgives the Plough.

Many a long-distance drive or evening walk was spent in consideration of the music, the words, the running order, my final gig, and each of those journeys was a time of pleasure. There was something in the contemplation of the end that was strangely satisfying; a bit like planning a holiday without having to go through the lunacy of airports, bus connections, hordes of people, delays, cancellations and turbulence. As John Clare said, anticipation is the sweetest of earthly pleasures.

Last October, I had a discussion with a friend about cardboard coffins. He told me he thought Ikea was selling do-it-yourself kits. As it happened, my wife, Angela, wouldn’t countenance the thought of having her husband’s future residence in her current abode. I tried to argue that a coffin would make an ideal coffee table/bookcase/blanket box, but to no avail. The response was that I was a control freak and that my obsession with arranging my own funeral showed a lack of trust in other people and that I’d actually have no control over the obsequies and that the whole thing might be changed without my ever knowing.

Even my threat to come back and loiter at the foot of the stairs, as a permanently chilly spot, brought no compromise on her part. “Fire away,” I was told. “At least some good will come of it – the dog will have somewhere cool to lie in the summer.”

And then she was gone but only temporarily. Her head reappeared around the kitchen doorway: “While you’re at it, why don’t you write the eulogy?” She paused for effect. “Better still, why not record it on camera and deliver it yourself.”

I would not be put down. My friend and I came up with an ingenious plan: I would keep his coffin in my house and he would keep mine in his. Our brilliant idea was immediately vetoed. A subsequent conversation with my sister Dolores about wicker coffins brought a swift response: “Would you want to be buried in a laundry basket?”

But an obsession of more than a decade and a half is not so easily laid to rest.

Last autumn, over a cup of coffee, my friend John Costigan and myself came to an agreement. Through the winter, he and I would make my coffin. It would be a simple affair, made from rough deal boards, with a hinged lid. Something like the coffins that appeared on Boot Hill in westerns of the 1950s and ’60s – the fare I grew up on in the Castle cinema in Castledermot.

There was the nudging problem of where to store it – it was still arca non grata (my rusty Latin is open to correction).

“Not a problem,” John said, “I’ll store it and you – well not you, obviously – whoever, can collect it when the time is right.”

As it happens, we didn’t get to work on the project this winter, but the offer still stands.

My next port of call, again over a cup of coffee, was to ask another friend, Noel Lambe, if he would take on the role of clown at my funeral. There’s a tradition of clown associations with funerals – dating back, I understand, to Greek and Roman times – and I’ve always liked the idea of the cortege being led by a figure of fun.

“Of course,” he said. “Hopefully the event is not imminent.”

I have, over the years, discussed the subject with my children Lydia and Ewan. During one such conversation, they assured me that they would be more than happy (in a mournful way, of course) to be among the pallbearers.

And then they reminded me that my stepmother had insisted that her coffin be carried only by women and that there be no prayers, no priests and no church – which didn’t stop her sister dousing the remains with holy water as the coffin was being closed. The best-laid funeral plans gang aft agley. I should have taken note.

My request to my stepdaughter Katie that she sing at my funeral was met with shock. “You must be joking and it’s not very funny.”

In the past year, I returned to the planned music and location for my funeral service. I asked Kevin Doherty to sing his wonderful song I’m Leaving Now at the last hurrah, and I want another musician friend, Shane Sullivan, to sing Here Comes the Sun as I’m carried (neither kicking nor screaming) from the community centre in Castledermot.

The centre seems the appropriate place for the ceremony. I went to school there; my mother taught there; we had our wedding reception there, so why not complete the circle of hatching, matching and dispatching? And, anyway, it’s a short enough walk – but not too short – from the centre to the cemetery.

My final resting place was sorted many years ago when the then postmistress in Castledermot told me, while weighing a parcel and sorting stamps, that there could be no question about my grave site.

“You’ll have to be buried in Castledermot,” she insisted. “You belong here.” Never mind the fact that I live across the border and half a dozen cemeteries away in south Carlow.

That conversation got me thinking about graves and headstones and the words that might appear thereon. I settled on an adaptation of a poem by Federico García Lorca, a translation that I rewrote to include forests and poppies and cornflowers. But that, too, has changed with time.

Stranger on the stair

I’m not sure whether I’ve had some sense that the stranger on the stair may now have found his way on to the landing and is loitering there, his hand on the knob of the bedroom door, but I’ve had this sudden realisation that all the planning and preparation and consideration is irrelevant.

The onset of Covid-19 and the sad sight of lorry-loads of coffins crossing the Italian countryside have put the luxury of choosing and arranging and orchestrating a funeral into context. If the stranger were to open that door one of these nights, things would happen quickly and straightforwardly and without all the trappings I’ve been planning for almost 20 years. There would be no readings, no music, no procession, no clown, no poems. Simplicity and safety would be the watch words.

I recently though about a friend’s funeral in his orchard in the northwest of the country. A simple funeral, no coffin, just a winding sheet; a grave among the apple trees and the unpretentiousness of going and giving back to nature.

Suddenly, the plainness of cremation seems appealing. And, perhaps, the scattering of ashes at my favourite spot in the world: Mullaghcreelan Woods, between Castledermot and Kilkea. And maybe a small plaque somewhere among the trees, bearing Leonard Cohen’s beautiful words:

So come, my friends, be not afraid.
We are so lightly here.
It is in love that we are made;
In love we disappear.
But do I hear Angela’s voice somewhere in the background?
“You’re doing it again!”

John MacKenna is a playwright and novelist