If you are an Irish writer and feel your voice is under-represented, you need to know this 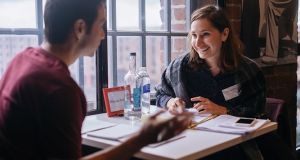 A writer and editor at WriteNow Liverpool in 2018.

The Penguin Random House WriteNow programme – which seeks out, nurtures and publishes new and under-represented voices on our bookshelves – is now taking applications for their 2020 intake. This year they have extended the process to include Ireland, north and south. If you are an Irish writer and feel your voice is under-represented in books, you need to know this because I want you to apply.

I sent my application to WriteNow in 2016. I met the criteria because I worked in a call centre for the minimum wage and considered myself socio-economically deprived – which I was. I had also been writing a book for four years. My expectations were low: my story was parochial and couldn’t interest anyone outside of Derry. No one wanted to read about “war-torn Derry”; I wasn’t good enough to be taken seriously.

If there had been an entrance fee, I wouldn’t have applied at all. But it was free and I did.

What I wanted, more than anything, was an invite to one of the WriteNow events: 150 writers meeting in one place to learn everything about publishing. And everyone would have a 20-minute one-to-one session with a Penguin editor who would critique their work-in-progress. Someone in the Penguin office would have read my work and thought it was good enough. That was a win in itself.

It was a shock to receive the email saying I was successful, and I was terrified going to the Manchester event the following February. Throughout that amazing day, I held my nerve and brassed it out. Everyone else was younger and brighter. Everyone seemed to be writing about crime-fighting time travellers and magic realism. When they asked me what I was writing about – which happened a lot – I said the 1980s hunger strikes and teenagers trying to avoid it. Each time, I got the same strange look and I wanted to die. It was excruciating. I didn’t belong.

But in my 20-minute session with an editor, I was told how my writing flowed, how wonderful and universal the story was. There was no advice, no “you should be doing this … or this …”

And then I was chosen as one of 10 mentees and assigned to a wonderful editor, Juliet Annan of Fig Tree. She showed me how to turn a story into a book. She saw the possibility in me. And, from that experience, I also realised that people who work in publishing are genuine and enthusiastic. They love writers. They do not see themselves as exclusive or as gate-keepers to publication.

But they are, whether it’s conscious or not. Their decisions hold the key to what we read and if they don’t cast their nets wide enough, they miss writers like me or writers of colour, trans writers or writers who are disabled.

Other barriers are more subversive – lack of contacts, lack of confidence, fear and self-doubt. It is widely accepted that to be published is almost impossible. We are told to expect rejection, that no one will want us, but to keep submitting anyway. We are told not to hope for success and not to complain during the months waiting for a response. They’re all busy people, with lots to do.

Then there’s that person who ditches the rat race to back-pack across the Himalayas, only to return to a six-figure book deal. Or the celebrity, for whom the mere notion of writing manifests itself in a book, a huge publicity budget and tour. It’s the old boys’ and girls’ network, otherwise known as “who you know”. It’s favours and introductions. Actual talent seems less important than the right class, profession or gender, all with a huge sense of entitlement and confidence.

Believing that you belong is the thing.

I didn’t think that I belonged at all. I realise now that my sense of not belonging, of being wrong, confirmed why I belonged in that room in Manchester. Penguin were looking for me.

My novel is called Music Love Drugs War. The Guardian review is mounted on my living room wall. I was interviewed at the London Palladium by Markus Zusak, author of The Book Thief, for goodness’ sake, and the Arts Council of Northern Ireland gave me money to work on my next novel. I have writer friends.

So far, 450 writers have attended nine workshops. Of those, 33 have been mentored and 10 have Penguin book deals. Over a quarter of participants have been published elsewhere and 98 per cent of the writers who took part in the event said their confidence as a writer increased.

Here is the link to the WriteNow website, where you will find the criteria and everything else you need – including details of this year’s workshop, which will be held virtually. The deadline for applications is May 31st, so make sure you apply soon. Don’t underestimate yourself. Don’t let fear of not being good enough hold you back. They want to hear from you.

All it takes is 1,000 words and the nerve.
Geraldine Quigley is the author of Music Love Drugs War, published by Fig Tree. The Penguin Random House WriteNow programme is open to applicants until May 31st. Go to penguin.co.uk/writenow for more information.