Why the Boris Johnson, Jeremy Hunt leprechaun cartoon is no laughing matter

Opinion: Our troubled relationship makes satire at our expense from the UK problematic 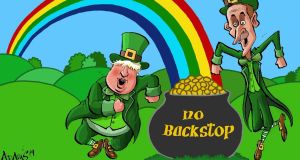 Christian Adams’ cartoon in the London Evening Standard of July 2nd is but one in a series of recent cartoons which have offended public opinion because they are perceived to use negative stereotyping – in this instance, anti-Irish stereotyping.

The two surviving candidates for the leadership of the Conservative Party are shown as leprechauns, chasing a pot of gold at the end of a rainbow. The elusive – indeed, illusory – pot of gold bears the inscription “no backstop”. It thus ridicules in graphic form the unrealistic expectation peddled by both Boris Johnson and Jeremy Hunt that the so-called Irish backstop can be removed from the withdrawal agreement which they might renegotiate with the European Union. It should, therefore, be seen as endorsing the position of the Irish Government – and of the EU – that the backstop is an essential part of any withdrawal agreement.

However, a leprechaun trope in a cartoon about an issue pertaining to Ireland – even if British politicians are the target of the cartoon - should have set off alarm bells in the office of the editor of the Evening Standard, former British chancellor George Osborne. The cartoonist Christian Adams responded to criticism on social media by saying the cartoon was about Johnson and Hunt, "not the Irish". He also said his "satire" was going "above many heads".

But satire, whether in literary form or in cartoons, is generally regarded as something that “punches up” – in other words, a weapon of the powerless against dominant groups and people. Even in ancient times, Aristotle defined wit as “educated insolence”.

Wow, satire going above many heads today!
It's a comment about Johnson and Hunt, not the Irish! 🙄 https://t.co/bsUUpfW0Dj

Glad to see ye’re still at it after all these years pic.twitter.com/RaBsRS7Oo5

Most people feel it is insensitive to use it against the powerless – and, particularly, against vulnerable minorities – and it is always controversial to do so. The reaction to the recent New York Times cartoon employing imagery regarded by many as quintessentially anti-Semitic to caricature Benjamin Netanyahu and Donald Trump was an example of that, as was Mark Knight’s cartoon about Serena Williams in the Melbourne Herald Sun newspaper last year. And we don’t need to be reminded of the Charlie Hebdo cartoon that led to the massacre at their offices in Paris in January 2015.The troubled history of our relationship with our formerly dominant neighbour makes satire at our expense emanating from the United Kingdom similarly problematic.

Moreover, cartoons shouldn’t target individuals or groups for what they are, as distinct from what they do. There is a world of difference between these two categories of cartoon. Both may give offence – it is of the essence of cartoons that they will offend someone – but, whereas the first category involves gratuitously offensive and often hateful stereotyping, the second is aimed at making people think and question their actions and values with a view to correcting folly and injustice.

Linking the Irish with leprechauns is a mild form of stereotyping, but it is stereotyping nonetheless – and it is necessary to be vigilant lest it becomes an acceptable part of public discourse. In this regard, it should be noted that Christian Adams’ cartoon is not the only one on the theme of Brexit and the Border to use the leprechaun trope: “Matt”, in the Daily Telegraph, has published a pocket cartoon showing two leprechaun-like Irishmen leaning against an invisible border – an “imaginary hard border”.

In the past – even the recent past – a much more hostile stereotyping of the Irish in the British cartoons was commonplace. Punch and other organs of satirical journalism in Britain in the 19th century were savagely anti-Irish and anti-Catholic, and their cartoons are notorious for their “simianization” of the Irish – especially physical-force nationalists. The Irish were portrayed as apelike creatures, as an “Irish Frankenstein” or, using the template of Shakespeare’s play The Tempest, as Caliban or O’Caliban – with the benign Englishman as Prospero, shielding Hibernia/Miranda from the threatening advances of the bestial Caliban. Such images both reflected and reinforced a sense of superiority over the Irish, and they would re-emerge when the Troubles in Northern Ireland broke out in the late 1960s and the IRA extended its campaign of violence to Britain.

Cartoons in response to the Troubles in the British press, especially in the tabloid press, crudely repackaged the image of the simian Irish from a century earlier. Unlike in the Victorian era, however, such anti-Irish stereotypes now embraced the Protestant as well as the Catholic Irish. For instance, Raymond Jackson (“JAK”) published a cartoon in the Evening Standard in 1982 depicting a spoof film poster for “The ultimate in psychopathic horror: the Irish”, with terrorists on both sides of the Troubles as equally misshapen monsters comparable to Punch’s O’Caliban and the “Irish Frankenstein”.

Nobody should regard Christian Adams’ cartoon in the Evening Standard as in any way as offensive as the Punch cartoons or JAK’s image of the psychopathic Irish – but it is notoriously difficult to assess the impact of what appears in newspapers and magazines, and it behoves us all to be cautious at this time of renewed tension between Britain and Ireland. Even if derogatory or denigrating stereotypes in cartoons are nothing more than distasteful, they are certainly not helpful in promoting understanding and goodwill.