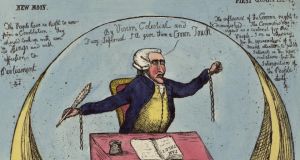 Book Title:
A Philosophical Enquiry into the Origin of Our Ideas of the Sublime and Beautiful

Edmund Burke was born in his family home on Arran Quay in Dublin in 1729 or 1730. His mother, Mary Nagle, was a Catholic; his Protestant father, Richard Burke, a lawyer, and attorney of the Irish Court of Exchequer. Between the ages of six and 10, he was reared by his uncle, Patrick Nagle, in Ballyduff, Co Cork. After that, he went to Abraham Shackleton’s school in Ballitore, Co Kildare. From 1744 to 1749 he attended Trinity College. From 1750 to 1755, he studied, at least supposedly, for the Bar at Middle Temple, London, but he gave it up after a quarrel with his father.

His settled ambition was to become a writer, a man of letters, what we would call a “public intellectual”, intervening on current political issues. A Philosophical Enquiry into the Origin of Our Ideas of the Sublime and Beautiful was published anonymously in 1757. Two years later, a revised and extended edition was published, still anonymously.

A critical edition, giving all the variants between the first and the second edition, was prepared by James T Boulton and published in 1958. This is the text that Paul Guyer has retained. He has also contributed a most informative introduction and helpful annotation.

Burke’s boldest gesture is to name his principles “sublime and beautiful”, and to claim that they cover the whole range of feeling.

He assumes that feelings are uniform in “the human creature”, and that the knowledge provided by our senses is reliable. Everybody has learnt that sugar is sweet and vinegar sour. We know light and darkness, how they differ. Burke divides sensory experience into his two categories. The sublime is what makes me afraid. Fear created the first gods:

“Whatever is fitted in any sort to excite the ideas of pain, and danger, that is to say, whatever is in any sort terrible, or is conversant about terrible objects, or operates in a manner analogous to terror, is a source of the sublime; that is, it is productive of the strongest emotion which the mind is capable of feeling.”

This experience may come from natural catastrophes, and also from the blow of whatever terrible thing we don’t understand. In Yeats’s play The Resurrection the Syrian says to the Greek and the Hebrew: “What if there is always something that lies outside knowledge, outside order? . . . What if the irrational return?”. In Yeats’s poem Easter 1916, when he says “A terrible beauty is born”, he might more accurately have said “The sublime is born”.

Burke says: “It is thus with the vulgar, and all men are as the vulgar in what they do not understand”. If I am destroyed by a blow of terror, then I am indeed destroyed, my story is over. If I survive, I do so by bracing my nerves, and then I feel what Burke surprisingly calls delight. My achievement is what he calls self-preservation.

The evidence he finds for the sublime is nearly always literary, passages in Homer, Horace, Virgil, Spenser, Shakespeare and Milton. Near the end, he quotes a passage from the second book of Paradise Lost where Milton describes the travels of the fallen angels in Hell:

“ . . . through many a dark and dreary vale They passed, and many a region dolorous, O’er many a frozen, many a fiery alp, Rocks, caves, lakes, fens, bogs, dens, and shades of death, A universe of death . . .”

Burke’s comment on this is remarkable: “This idea or this affection caused by a word, which nothing but a word could annex to the others, raises a great degree of the sublime; and this sublime is raised yet higher by what follows, a ‘universe of death.’ Here are again two ideas not presentable but by language; and an union of them great and amazing beyond conception; if they may properly be called ideas which present no distinct image to the mind; – but still it will be difficult to conceive how words can move the passions which belong to real objects, without representing these objects clearly.”

The difficulty he refers to, he pursues in the last chapter, on words, the most original chapter in the book. The distinction he makes between “a clear expression” and “a strong expression” doesn’t help the case much, but I’m not sure what form real help would take.

“By beauty I mean,” Burke says, “that quality or those qualities in bodies by which they cause love, or some passion similar to it”. The things that inspire us to love, “we like to have them near us”.

The beautiful is therefore related to our presence in society: it is regularly fulfilled in conversation and correspondence. Burke does his best to exclude sexual desire from consideration, because lust is there predominant: “it is to this latter that we must attribute those violent and tempestuous passions”. But he allows that a violent form of the sublime may be modified, by long custom, into the beautiful. The best example of this happiness I know is in his late Letter to Sir Hercules Langrishe where he remarks with satisfaction that “the Normans softened into the English”.

The Enquiry was immensely popular: 14 more editions and printings were published before Burke’s death in 1797. Immensely influential, too. It was reviewed at once by Arthur Murphy and Oliver Goldsmith. Mary Wollstonecraft ridiculed Burke’s notion of women, as when he said that “The beauty of women is considerably owing to their weakness, or delicacy, and is even enhanced by their timidity, a quality of mind analogous to it.”

But the imprint of the Enquiry can be found in Kant, Schopenhauer, and Nietzsche. His sublime and beautiful, as Guyer points out, are much the same as Nietzsche’s Dionysian and Apollonian drives.

The book has been read in several contexts. It’s not persuasive as a poetics or an aesthetic. I read it as an essay in experimental psychology, but it is more often read politically, by taking values and motifs in it and finding them, provoked by new circumstance, in the Speech on Conciliation with America,the articles of impeachment of Warren Hastings, Reflections on the Revolution in France and other works.

Scholars as differently inclined as Conor Cruise O’Brien, Seamus Deane, WJ McCormack and Luke Gibbons have made much of Burke’s years in Ireland, his hostility toward the Protestant ascendancy, his voice against the Penal Laws, his sympathy for poor Catholics, as the Catholics he saw in Ireland were nearly always poor.

A letter to his friend Charles O’Hara in Dublin has this sentence: “I hate to think of Ireland, though my thoughts involuntarily take that turn, and whenever they do meet only with objects of grief or indignation.”

Sublime, not necessarily in Burke’s version, has become a politically charged word. Usually it is made to refer to something dreadful in the world which one regards as a universal catastrophe, the machinations of which one doesn’t understand; therefore one fears it. Fredric Jameson calls global capitalism “the sublime,” but any of us might apply it to our choice horror, something omnivorously fearful. The question then arises: is it something I’ll survive, or not?