‘What’s it like to be an Irish teenager embracing womanhood? More than a little scary’ 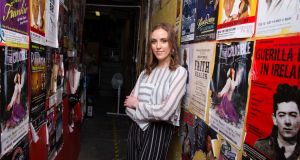 Louise O’Neill at the Everyman Theatre in Cork, where the stage adaptation of her novel ‘Asking For It’ will be performed as part of the Cork Midsummer Festival. Photograph: Darragh Kane

Were it not that every school in Ireland had a staff member like Tim Burke. The English and drama teacher at Coláiste Choilm in Ballincollig, Cork, is all too aware that novels and plays are an effective way into difficult conversations and issues for his pupils.

“I think young people have still not lost that gift of creativity and imagination – it’s a way of exploring other possible lives, and ways of living,” he explains.

For them, he observes, Louise O’Neill’s novel Asking For It has been seminal. The book is a damning account of rape culture, inspired by the Steubenville High School rape case in which a teenage girl, incapacitated by alcohol, was sexually assaulted by peers.

Recent events have conspired to make the text more relevant than ever: the recent Belfast trial is fresh in students’ minds. Recently, 20 miles down the road in a Mallow secondary school, a “rape list” of girls’ names was found in the boys’ toilets.

Burke’s pupils are regular theatregoers, and a month ahead of the world premiere of the stage adaptation of Asking For It, he has arranged for O’Neill to meet with transition-year, fifth-year and sixth-year students in a town-hall- meeting-style event.

It’s a departure from the usual question-and-answer format of school events that O’Neill has done in the past. Many of the 19 girls and five boys are fans of O’Neill, but they’ve been briefed that this isn’t a spectator event: rather, everyone is encouraged to talk about the issues contained in the book.

Also in attendance are Mary Crilly from the Cork Rape Crisis Centre and Martin Davoren of the Cork Sexual Health Clinic. Moderating the discussion is English literature lecturer Siobhán Burke.

It’s a collegiate and supportive environment, and it doesn’t take long for the round-table discussion to liven up, pinging between toxic masculinity, slut-shaming, the aforementioned Belfast trial, the forthcoming Eighth Amendment referendum, online threats and the implications of girls’ clothing choices.

There’s a palpable sense of discontent and urgency in the room.

What these students, aged 15-17, don’t know about feminist ideology and sexual politics is barely worth knowing (even O’Neill admits she should be taking notes), yet navigating the social landscape for even the most articulate and sure-footed of them remains a challenge.

“It’s great to see that you have such strong voices because I definitely didn’t when I was at school,” O’Neill tells them. “I would have been very liberal and considered myself a feminist, but didn’t speak up because I didn’t want to seem dry or boring. I was trying to play the cool girl well into my 20s.”

Many of today’s participants are a fortnight from their Leaving Cert, yet in this two-hour event, it quickly becomes evident they have much more on their minds.

Anyone who has dismissed this generation as entitled, solipsistic snowflakes – a label the youngsters groan at in unison – would do well to hear the barnstorming speech by 17-year-old Hayley, a 5th-year student.

“What’s it like to be a teenager embracing womanhood in our society today? I think I speak for the majority of girls and young people when I say it’s more than a little scary,” she says. “Many of us are afraid of stepping into adulthood in this country.

“I’ve had the word ‘feminism’ thrown at me as an insult more times than I can count, but I wear it as a badge of honour that says I’m not afraid to make a difference.

Referring to the reporting of rape and ensuing trials, she adds: “Why on earth would anyone speak out, knowing that’s the trauma they will be subjected to?”

O’Neill is in full agreement: “Sometimes it feels as if men have futures that must be protected at all costs and women have pasts that need to be dissected for signs of wrongdoing,” she notes, to murmurs of resigned agreement.

Sex education is another pressing concern for these youngsters.

“Sex education in school is back in the dark ages,” acknowledges Davoren.

“I’ve gone through 13 years of education and the most sexual education I’ve ever received was a few hours in 5th year about contraceptive advice, which is frankly too little, too late,” says Hayley. “Not once has the word ‘consent’ come up.”

‘Consent is not grey’

Mary Crilly offers them encouragement, and advice. “Consent is not grey. It’s black and white. If someone says, ‘this has happened to me’, your reaction is important. Look them in the eye and say, ‘I’m really sorry this happened to you’.

“Anyone who knows me knows that you matter to me, not auld ones my age,” she says. “You can change the future.”

Many agree that teenagers aren’t given the credit they deserve.

“I think the infantilisation of young people is insane,” observes O’Neill. “I hear women say, ‘do you think this [book] is appropriate for my 15-year-old?’ and I’m rolling my eyes. Do you have any idea what your 15-year-old is being exposed to on the internet or in school?’”

It quickly becomes apparent that, with age-old masculine tropes being dismantled, young Irish men are still finding their feet in a shifting world.

“The important thing to make sure is that there is an alternative ‘script’ for guys,” asserts Con, a fifth-year student. “We are not being told the new script to follow. I was not able to play sports, and I was cut off from every peer, apart from my brother. There’s too much emphasis placed on physical prowess for guys.”

Siobhán Burke makes reference to Pronoun, a play the school created on transgender identity. If bringing older generations around to their way of thinking is what they want to do, using drama and the power of lived experience – much like O’Neill has – is one way to initiate the conversation.

“A lot of parents showed up [to that play] and some have been open to the changes that have happened in the past 30 years, some less so,” she says. “But you made them look at different layers and see different possibilities. That way, a snowflake becomes an avalanche.”

Asking For It premieres at the Everyman Theatre as part of Cork Midsummer Festival on June 15th (until June 23rd) and will be at the Abbey Theatre, Dublin in November (12th-24th). See everymancork.com for details