We need new protest songs for our times 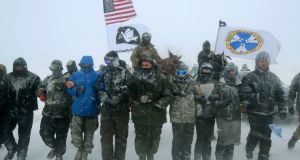 Despite blizzard conditions, military veterans march in support of the “water protectors” at Oceti Sakowin Camp on the edge of the Standing Rock Sioux Reservation in December 2016 outside Cannon Ball, North Dakota. Photograph: Scott Olson/Getty Images

I have taken part in hundreds of demonstrations. I have never really enjoyed any, or found them fun. In fact, I sometimes find them embarrassing and for different reasons.

All the old cliches come out, placards with Make Love Not War. And songs like We Shall Overcome or This Land is Your Land. An anthem that was so right for its time when the great Woody Guthrie wrote it – but not so good now. I brazenly rewrote it and sang it at a politically focused reading in Burlington, Vermont a few years ago.

This land ain’t my land, this land ain’t your land
From Siliconia to Manhattan Island
From the Deadwood Forest to the Gulf-spilled waters
That stand ain’t now for you and me.

As we were driving that six-lane highway
We saw above us that smoggy skyway
We saw below us that landfill country
This land ain’t made for you and me.

We robbed and ravaged and wallowed in riches
Drilled our wells, and nuked our deserts
While all around us a voice was sounding
This land ain’t made for you and me…

At protests I try to join in with the singing of the old songs, but I often feel embarrassed because the songs hearken back to the hard-fought glory of other times and issues, to the civil rights and anti-Vietnam war demonstrations of the 1960s. Now the songs have a sort of insincere rallying self-importance and righteousness.

We need new songs for our time and there have been some, but none have managed to replace the old ones. Though there were real advances in human rights in every way during the 1960s, there was also the failure of reduction and polarisation: “We are the good side and you’re the bad side”. A legacy often more about division rather than uniting and understanding. A barrier was created.

I do not like to be characterised, both by the group itself, and by those outside it. People at protests tend to wear identifying apparel – everyone generally and unwittingly tends to in life – but when it is a large group then it turns into a uniform.

How many demonstrations have I been to where one side is the denim, bearded and casually clothed group, and the other is the clean-shaven besuited side? I often wear a tie and collar when I attend a demonstration, in part not to be easily identified, but partly also as a strategy to show “the Suits” I am like them, “like you”, “like us”. A tactic to destabilise the impression of what the other side looks like.

This has had an odd effect on a number of occasions. Once while demonstrating against the World Bank some fellow protesters remarked that I looked like a CIA agent and it unsettled them. On another occasion I was arrested for committing civil disobedience. A few of the other protesters thought I was a spy for the police because of how I dressed and because I talked and joked with the police as I waited, handcuffed in the cell. I found this out afterwards. And drew on it to write The Double Agent:

He decks up in shirt and tie for a demonstration.
What’s it this time? A war, the World Bank, race,
the sacredness of water, gender, skin exploitation,
the military, climate change? Whatever the case

and cause, he’s looking sharp, a tactic for change,
to confuse the Suits, tell them he’s in solidarity
with them, that everyone’s the same, not so strange;
that he’s a denim draft-dodger, dodging the royalty

of the left; that he’s an irregular of the good,
that each side can finally know equality, see
through the attire of difference, be understood,
that we’re all the kin and bone of similarity.

Imagine a demo of Suits marching on the Hill.
The Denims think he’s a double agent, dressed to kill.

In 2016 I spent a week at Standing Rock in North Dakota during the Tar Sands Pipeline struggles – a project that would scar the land and heritage of the Great Sioux Nation. I was part of a Vermont contingent who wanted to support the First Americans and at the same time protest against the fossil fuel industry. The US government and the oil moguls had invaded the reservation of the Lakota, a tribe that is part of the Sioux nation.

My week in the Dakotas was unforgettable and scary. We were hardly off the bus when the police began attacking protesters with tear gas, sound grenades and rubber bullets. One woman was severely injured when a rubber bullet hit her at close range. In the fog and inferno of gas, people were lying on the road in agony. It was a war zone.

Of all the events I have taken part in, Standing Rock is one that will always stay with me. It was also interesting from a white heterosexual male perspective. At general daily meetings in the large tepee it was the First Americans, people of colour, women, and cross-gendered people who were given attention before the white heterosexual man. I got an inkling of what it was like to be a female, a transgender person, a person of colour, a first American in the outside world.

I have tried to mirror my activism into my domestic life. My house in Burlington runs on solar power and I bike everywhere all through the year. I do these also for myself, my own quality of life, and I can enjoy my evening drink all the more. I have not surrendered to apathy.

Poetry is where I am most at home. It is natural that my public concerns become the subject of many of my poems. My recent book No More Time shows how we are affecting the planet and how we must and can change. Our reaction to the Covid virus shows us this is possible.

A fitting poem to finish with, a translation, which is also included in No More Time, is Seán Ó Ríordáin’s Apathy is Out:

There’s not a fly, moth, bee,
whose welfare’s not our responsibility;
to ignore their predicament
isn’t on.
There’s not a person in Mad Valley
we shouldn’t sit with
and keep company, since
they’re sick in the head
on our behalf.

There’s not a place, stream or bush,
however remote; or a flagstone
north, south, east or west
that we shouldn’t consider
with affection and sympathy.
No matter how far South Africa,
no matter how distant the moon,
they’re part of us by right:
there’s not a single spot anywhere
we’re not a part of. We issue from everywhere.