In the Dark River review: A skeleton is found in Victorian Dublin’s Poddle 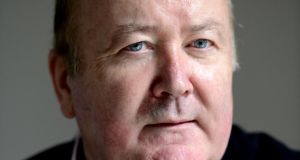 Conor Brady: his character Joe Swallow is solid and dependable, loyal to the cause of the greater good. Photograph: Cyril Byrne

Book Title:
In the Dark River

Joe Swallow should be a happy man. Recently promoted to detective inspector in the Dublin Metropolitan Police as a result of consistent excellence, as detailed in former Irish Times editor Conor Brady’s previous Victorian-era novels – A June of Ordinary Murders (2012), The Eloquence of the Dead (2013) and A Hunt in Winter (2016) – Swallow is liked by the rank and file of Dublin Castle and esteemed by his chief, John Mallon. He has even earned the grudging respect of Dublin’s criminal fraternity, chief among them the Vanucchi Gang. Newly married to his beloved Maria, Joe Swallow should be able to put his feet up on his desk and enjoy the fruits of his labour.

Not that he wants to. The tragedy of Maria’s recent miscarriage, and his inability to articulate his grief, have driven Swallow to take on a greater workload, overseeing an investigation into the skeleton discovered in an underground branch of the Poddle and taking responsibility for investigating an armed robbery at the Rathgar home of one of Dublin’s legal eagles. And then there’s the rather pressing issue of British intelligence operatives employing the Victorian equivalent of black ops as they try to destroy Charles Stewart Parnell and the Irish Parliamentary Party . . .. .

In the Dark River opens in Madrid, with journalist Richard Piggott brooding on his disgrace. His attempt to smear Parnell revealed as forgeries, Piggott likely faces a charge of perjury should he return to Ireland. Was Piggott’s humiliation and ruin sufficient to cause him to take his own life, as the British Secret Service suggests? Or is Swallow right to believe that Piggott, a pawn, was simply taken off the board?

Parnell’s imminent fall from grace casts a long shadow across In the Dark River – the reader understands that, in the long run, Swallow’s machinations as he strives to protect “the uncrowned king of Ireland” are irrelevant. That flies in the face of the certainties (truth, justice, the status quo upheld) that crime fiction tends to offer, but Brady offers a similarly idiosyncratic take on the other investigations that occupy Swallow’s time: crooks get off scot-free, killers go unaccused, villains form covert alliances with the police. Don’t be fooled by the historical setting and the genteel tone, the “cosy” style and the police procedural form: beneath its apparently placid surface, In the Dark River is anything but a traditional mystery novel.

It’s as if the dark river – which we initially assume to be the Poddle, which wends its way beneath the Dublin streets, and in which the woman’s skeleton is discovered – is in fact Time itself. All the cases that present themselves for Swallow’s investigation began bubbling up long ago, and only emerge into view when it is too late for Swallow to do anything but belatedly appreciate the extent to which he is out of his depth. He can make all the appropriate gestures – open a murder book, delegate detectives to investigate killings and robberies, engage in counter-intelligence designed to frustrate the British Secret Service – but all the while the river keeps flowing relentlessly on.

Joe Swallow is a good man and a good policeman, but he is not superhuman. Crime was as intrinsic to Victorian Dublin as it was to the modern city, and no one man, no matter how grudgingly respected he is, is going to persuade the Vanucchi Gang and their ilk to go straight. Despite Swallow’s best efforts, Charles Stewart Parnell is doomed. If that fatalistic streak runs contrary to the crime novel’s expectations, so be it. Joe Swallow – solid and dependable, loyal to the cause of the greater good even as he flounders about in the dark river – is arguably the most realistic policeman in Irish crime fiction’s thin blue line.

Declan Burke is an author and journalist