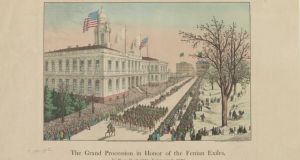 The grand procession in honor of the Fenian exiles, in New York, in February, 1871

This is a book of 10 essays, two of which were written specifically for this publication by Oliver P Rafferty, a Jesuit priest and professor of history at Boston College.

Rafferty states in the preface: “The [Catholic] church’s first duty was to support government as a manifestation of the divine will, except in situations where the state actively sought to undermine the position of the church.”

The statement is only partly correct. This was only the case where Catholics were in the minority – in other words, it was satisfied with religious freedom. But where Catholics formed the majority, it demanded that Catholic teaching be incorporated into law.

We learn in the essay on The Catholic Church, Ireland and the British Empire how delighted the Vatican was for the vast proselytizing possibilities that opened up as a result of Ireland’s position in the emerging British empire. So much so that the Vatican actually preferred heretical Britain over Catholic Portugal to exercise authority over Catholic affairs in Goa in India.

It wished to reverse its own long-standing arrangements with Portugal that allowed that country rights in appointing bishops in the sub-continent. Just as incredible was the Vatican moving behind the scenes during the post-war negotiations at Versailles, asking Britain to take over from France as the protector of Catholic interests in the Middle East. The author calls their relationship an entente cordial.

The population of Protestant Britain in 1800 at the Act of Union was about 10.5 million. The arrival of about five million Irish Catholics at once into a polity that defined itself through its Protestantism and that had long legally despised them was going to be bumpy. There would be both assimilation and resistance, including by some bishops, in spite of the Vatican. An official report put the numbers of Catholics in the British Army in 1836 as high as 50 per cent, over 90 per cent of whom were Irish. They needed Irish chaplains to minister to them and to ensure continued recruitment by the Irish to serve the empire.

In Rafferty’s essay on the Famine, the quotes are a treasure to read again. The Irish are blamed for bringing it on themselves, “the Irish have profited much by the Famine”, which was “sent by God not only to punish the Irish for their indolence, but also as a heaven-sent opportunity to reform their nature and character”.

The essay entitled Fenian Terror and Catholicism in North America is an extremely informative account of the internecine differences within the Catholic Church there in response to the Fenian movement. The title is puzzling as the author fails to detail any terrorist outrages in North America by the Fenians. The ill-advised Fenian invasions of Canada were poor military operations, but hardly “terror” as we know it. The statistic that out of 59 Fenian prisoners held in a Toronto prison 16 were Protestants is interesting.

The essay on Cardinal Paul Cullen and his ultramontanism is fascinating. For nearly 30 years he was the leader of the Catholic Church in Ireland and it was a different “devotional” church that he bequeathed to his successor, although this reviewer doubts that everything in his life “flowed [from his] spirituality”, as the author puts it. His exultation of the wars of the Papal States where many died might have had something to do with the great worldly possessions of the pope in Italy. Rafferty recalls that, to Cullen, these wars were “spiritual combat”. Many would disagree.

Surprisingly, the author fails even to mention Archbishop John MacHale of Tuam who was, in many respects, Cullen’s polar opposite. MacHale spoke against the doctrine of papal infallibility at the First Vatican Council in 1870. Interestingly, the author reports that Cullen claimed that those American bishops who opposed papal infallibility were also “soft” on Fenianism.

Perhaps one of these was Limerick-born bishop, Edward Fitzgerald of Little Rock, Arkansas, who was one of the only two bishops at the council who, in the final vote, voted against the proposed doctrine. Cullen, of course, believed in the then oft-quoted phrase, “Outside the church there is no salvation”, and even insisted that the pope had at least indirect (and therefore perhaps direct) temporal authority in Ireland.

The essay on the Irish Catholic Church and the second World War is very thought-provoking, especially on the sectarianism in Northern Ireland, official and unofficial. We learn that in 1942 William Lowry, Northern Ireland minister for home affairs, after learning that an Orange Hall in Portrush had been used for Mass for American soldiers, declared that it would have to be fumigated. The author is very critical of Cardinal MacRory of Armagh and other bishops for, among other things, failing “to engage at an intellectual level on the issues posed by Nazism”.

The author believes, in effect, that the church’s principles against the use of violence in Ireland have been subordinate to and abrogated by expediency, as well as its desire to keep control over its flock as circumstances changed. Rafferty might usefully have drawn the comparison with its sister church in America during the 1860s. During the American Civil War every Christian denomination there split over the moral question of slavery – every denomination save one, the Catholic Church. It solved the problem by taking no national position on the moral question. If a state voted to secede, the Catholic Church in that state would be “patriotic” and support the Confederacy.

The final essay, Embedded Memory and the Churches in Ireland, is both theoretical and historical, and very profound.

This very well-written, closely footnoted and very scholarly book will provoke many a debate.