The poet’s new collection speaks up about dementia, death and societal amnesia 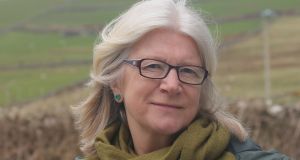 Geraldsine Mitchell: Remembering is an act of refusal, it blocks silence’s attempt to obliterate the past. Forgetting is the biggest ally silence has.

I have thought a lot about silence. About when we speak up and when we keep schtum. About the shame of not raising our voices. About the annoyance with those who do little else. About the “mind you I said nothings”, the winks, the nods. About inertia, accidie as default setting. About mutism and the efficacy, or not, of an unmute button. About silence.

Twenty years ago, my husband and I moved from an apartment in Dublin’s inner suburbs to a house in the west on a road off a road that ends in the sea, possibly the most dramatic cul de sac in Ireland. We replaced the swish of rainy rush-hour traffic, the wailing brakes of the 15B, for the bliss of a textured absence of din.

Not silence yet, but morning sounds were now no longer noise: wind-buffets in the chimney, surf pounding the shore after a big storm with the uninterrupted drone of a distant motorway. Our pleasure in the knowledge that it came from the sea, not cars. In truth it was more peace than quiet we had found. We made plenty of noise of our own and when my husband wasn’t writing, he was seeing to the classical music education of neighbouring sheep.

Eight years on and a new silence began to fill the house. My husband progressively, almost imperceptibly, slid into memory loss or, to use the word I found intolerable at the time, dementia. When you live with someone who does not speak, can no longer utter, the silence is loud, it blows up like a vast balloon, it fills the house and presses against you, ringing in your ears until you reach for the remote to put something, anything, on TV, for company.

After my husband’s death in 2015 came a new silence, the silence of absence. Yet another texture, a white wall this time, a wall of fog. No walls at all. True silence had finally arrived. And with it, more time than I wanted, needed or had bargained for – as if this could ever be worth haggling over – time to take silence by the scruff at last and have a closer look. Inevitably it fed into my writing.

To remember is to break the silence. That was my first conclusion. Remembering is an act of refusal, it blocks silence’s attempt to obliterate the past. Forgetting is the biggest ally silence has. Memory loss, dementia, call it what you will, descends in a cloud of erasure, the individual loses single words, then phrases, until every tool that serves to recover the past has been stolen. Silence and oblivion hand in hand in a danse macabre.

Then there’s societal amnesia, often beginning in wilful denial, a defence mechanism against too much guilt, the memory of pain. Painful memories. Paradoxically, it is through the silent act of writing that we can recover memory. To set down words in ink or in pencil, to stamp them into leather, captures thought and speech and anchors them. Like inscriptions chiselled on a grave marker, they are there now, set in stone.

My great-aunt Geraldine had been forgotten. Her disappearance was far more complete than I had realised when I first began to work on the sequence of poems that would become Such Silence She Fell Into, the central section of my new collection Mute/Unmute.

Not only had no one in the family known why I was called Geraldine, they had been unaware of the very existence of our grandmother’s younger sister, Geraldine Kirby. I knew about her only because another aunt, now deceased, took it upon herself to let me, and only me, it seems, know the tragic background to my given name. She understood the importance of breaking the silence around my great-aunt Geraldine, of bringing her back into memory.

With Such Silence She Fell Into I continue the rescue mission. My poem sequence does not pretend to be biographical. I had too few facts to go on. Yet those few I had were both full of mystery and immensely sad. In conjuring Geraldine Kirby’s life through poetry, I came across yet another silence: the great silence of loneliness, of her lonely life and even lonelier death.

My hope is that by committing this sequence of poems to print and placing it at the warm heart of a body of poems examining differently further aspects of silence and forgetting, I will have delivered my namesake from the silence of the unremembered.
Mute/Unmute is Geraldine Mitchell’s fourth collection of poems and is published by Arlen House.