‘This is the power of epic. As we read, the centuries compress’ 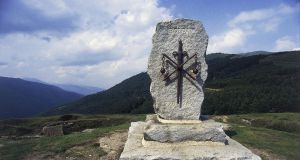 Halfway through a journey across Europe, which started in the Aegean and was due to end on an Icelandic farmstead, I stumbled into a collision between the past and the present. I was looking for a memorial to the epic hero Roland, who died at Roncesvalles in the Pyrenees and is celebrated in one of Europe’s most enduring epic poems, The Song of Roland (set down some time in the 11th century). So great was the impact of this tale that it was chanted by Crusaders on their way to the Holy Land, adapted into the Renaissance blockbuster Orlando Furioso and inspired a 19th century war-song by the composer of the Marseillaise.

Roncesvalles swelters in mid-summer. Cliff-sides bloom with blue columbines and a resinous scent pulses out of the pinewoods. Approaching Roland’s memorial, I could see I wouldn’t have the place to myself. For there, gathered around the grey stele that marks the hero’s fall – singing, chanting and squeezing an accordion – was a crowd of more than a hundred people.

They were clustered so thickly around the memorial that I could barely see it for all their banners, on which the date of Roland’s death (778) was emblazoned. But this was no cult to the fallen warrior – far from it. They were Basques, and they were celebrating the 1,239th anniversary since their ancestors did away with him.

Although the epic tale pits Roland against a fearsome army of Muslim Saracens – the big bad of medieval Western culture – the Basques know differently. For it was Basque ambushers who cut down Roland and his troops in 778. As one of the demonstrators put it: “the Battle of Roncesvalles is the first war the Basque people won”. “And,” added her partner, “the last”.

Meeting the Basque demonstrators was one among many experiences around Europe that showed me how deeply our ancient and medieval stories continue to resonate. That day in Roncesvalles, I attended a reading from the Song of Roland in a medieval church; and over five months of travelling across the continent, I came across many other recitals – from a performance of Beowulf in the original Anglo-Saxon to an Icelandic poetry gathering at which performers recited in medieval “skaldic” meters; from Balkan guslars performing songs about a tumultuous 14th-century battle to an Athenian open-mic reading of the Odyssey.

The latter was a fully interactive occasion. In a gallery of Athens’s Archaeological Museum, members of the public gathered under bas-reliefs of ancient figures drinking from rhytons, while a musician played on a lyre. One by one, people stood up to recite a passage, collectively spinning out the tale of Odysseus’ escapades with the Cyclops, the sirens and the rock-hurling Laestrygonians. “We see this as our story,” said Vera, one of the reciters. “Coming through many problems with the Cyclops and all these things. We are living the story when we read it.” Another reader, Ioanna, insisted: “The Odyssey is not from that time only, but every time.”

This is the power of epic. As we read, the centuries compress. The alien unfamiliarity – weird sacrifices, strange creatures, clunky armour – recede behind the foreground of emotional connections. In the Odyssey, we remember the reunion of the hero and his wife, and we share their relief as they lie in their marriage bed telling each other tales of their travails. In Beowulf, we connect with the joy of the mead-hall, the party atmosphere of boozing and story-telling before the hero must tackle the monsters. In the Song of Roland, it is the friendship between Roland and his wing-man Oliver that endures. They argue over tactics, and fall out bitterly, but they are best friends again before they die.

The Homeric epics have lasted for millennia, and their legacy is well-known, celebrated in a spate of recent high-profile retellings, such as Madeline Miller’s Circe and Pat Barker’s The Silence of the Girls.

What surprised me as I tramped around Europe, sleeping under the façades of medieval cathedrals and bedding down on ancient barrows, was the deep resonance that chimes for so many of these stories. In Germany, I came across new versions of the Nibelungenlied, the medieval epic about a dragon-slayer called Siegfried and his widow’s thirst for revenge. It’s a controversial tale, much misused by the Nazis. Recently, it’s been cited in speeches by the right-wing Alternativ für Deutschland, but also re-told in new theatrical versions.

I met two playwrights who had re-imagined the story: one had focused on the female characters, stripping all the men out of the tale; another had reconfigured Siegfried, the uber-German hero, as a Turkish migrant. As recent re-imaginings from Homer have shown, the raw material of epic has an extraordinary capacity for adaptation. Through these re-tellings, we are able to measure our own changing times.

Nowhere showed me the resonance of epic, however, like the Balkans. For this is where epic song endures as a living form of communal entertainment, handed down through the generations. In a village bar in Bosnia, I sat with guslars: men who work as mechanics, butchers and brickies by day, but gather in the evenings to perform on single-stringed fiddles and sing epic tales. Tears stream and voices plunge, deepened by cigarettes and generous re-fills of homemade rakija. You have to drink three glasses, and try to stifle the convulsions in your spine. With hands slamming against the tables, anecdotes spin from the medieval tales to more recent battles. For this is combustible material – one war veteran told me he performed these tales to his fellow soldiers when they were preparing to fight, during the terrible battles of the 1990s.

Dark and light: epics toy with the archetypes, and the best of them muddle them up (is Odysseus really a hero, or a wily, philandering con-man who devises weapons of mass destruction and leads all his men to their deaths?). These stories can help us reimagine our world, but they can also drive us to terrible deeds. They are wild beasts, beautiful and hard to tame. Misuse them at your peril, for they are liable to bare their teeth.
Nicholas Jubber is the author of Epic Continent: Adventures in the Great Stories of Europe (John Murray, £20)