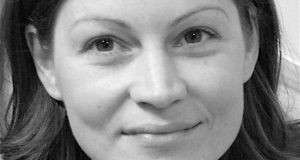 Kelly McCaughrain: her Flying Tips for Flightless Birds has won the CBI Book of the Year, Eilís Dillon and Children’s Choice awards

Belfast author Kelly McCaughrain has won the CBI Book of the Year Award with Flying Tips for Flightless Birds at a ceremony held today at Smock Alley Theatre. Remarkably and for the first time in the 29 years of the Children’s Books Ireland Book of the Year Awards, the same author has also won in two other categories, the Eilís Dillon Award for a first children’s book and the Children’s Choice Award. Recipients of the Honour Awards for Fiction and Illustration and the Judges’ Special Award were also revealed today.

Of the winning title the award judges said: “From the high wire of the big top to the high wire of teenage sexuality, this warm and funny story of adolescence is a delight to read. It explores family, friendship and first love with an authenticity that is both engaging and emotionally satisfying. Through the eyes of the two main characters – one through very clever use of a blog – we learn the pros and cons of being different and of managing life in the margins.”

Elaina Ryan, director of Children’s Books Ireland, said: “As we approach the 30th year of the Children’s Books Ireland Book of the Year Awards, it’s wonderful to see the evolution of quality Irish children’s literature. This was a shortlist packed with debuts, and today’s winners represent a new wave of artists whose work is truly extraordinary.

“Kelly McCaughrain’s achievement in winning three awards is unprecedented, and we feel especially validated that our adult judging panel chose the same overall winner as the Children’s Choice, which was voted for by over 260 groups of children and young people all over the island of Ireland.”

Kelly McCaughrain was born in Belfast in 1977 and grew up, she says, in 19th-century Avonlea. She doesn’t remember much about her (probably very nice) childhood and suspects this is because she wasn’t paying attention. She was reading Anne of Green Gables. She started writing when she was six. She started hiding her writing when she was seven. She was forced out of the writing closet when she was 35. One of her favourite activities is talking to teenagers about writing because she was too shy to do this when she was young. She studied at Queens University Belfast, where she did two degrees. For fun. She lives with her husband Michael and their ancient VW campervan Gerda. Her first novel, Flying Tips for Flightless Birds, has been described by insiders as an elaborate and thinly veiled attempt to make her husband love circuses. She refuses to comment.

During the ceremony, presented by broadcaster and book enthusiast Rick O’Shea, students from Synge Street CBS presented McCaughrain with her third award of the afternoon, the Children’s Choice Award. Voted for by young readers from all over Ireland, the winner is chosen by shadowing groups who read the shortlisted books and score them in the same way as the adult judging panel. The awards are supported by the Arts Council/An Chomhaire Ealaíon, Arts Council of Northern Ireland and Tyrone Productions.

The CBI Book of the Year Awards judging panel also made awards to the following:
Honour Award for Fiction: Brian Conaghan for The Weight of a Thousand Feathers. The judges said: “Plenty of philosophical questions are raised here, as 17-year-old Bobby faces issues of life and death. With Bobby as a convincing, authentic and ever-so-human narrator, we are with him all the way as he cares for his mother and younger brother and deals with the questions no young adult should have to face. This is a brave, masterful and powerful look at the lengths to which we’ll go for someone we truly love.”

Honour Award for Illustration: Aga Grandowicz for Dr Hibernica Finch’s Compelling Compendium of Irish Animals. The judges said: “The mysterious Dr Hibernica Finch wanted to be a dolphin when she grew up! Having become a zoologist instead, she now offers us a well-designed, beautifully produced blend of insight and information on the animals of Ireland. Presented in a playful tone, the superb, zoologically perfect illustrations are truly compelling.”

Judges’ Special Award: Joanna Donnelly and Fuchsia MacAree for The Great Irish Weather Book. The judges said, “From satellites to storms, from clouds to climate change and from Hurricane Ophelia to the Beast from the East, meteorologist Joanna Donnelly explains while Fuchsia MacAree illustrates every aspect of our great – and not so great – Irish weather. Packed with facts and fun, this is a book overflowing with in-depth knowledge – yet it wears its learning lightly. Easy to read alone or fun to read aloud with friends, it’s ideal for any age.”

The CBI Book of the Year Awards are the leading children’s book awards in Ireland. The awards are a celebration of excellence in children’s literature and illustration and are open to books written in English or Irish by authors and illustrators born or resident in Ireland and published the previous year. Previous winners include Sarah Crossan for One, John Boyne for The Boy in the Striped Pyjamas; Sheena Wilkinson for Grounded, Marie-Louise Fitzpatrick for There and Hagwitch and Oliver Jeffers for Once upon an Alphabet.

Áine Ní Ghlinn, chair of the judging panel, said, “The 2019 Book of the Year awards showcase the absolute best in Irish literature for young people. This year’s jury read and re-read more than 80 books in both Irish and English and finally selected the 10 books that achieved the highest level of literary excellence. The panel included authors, illustrators, teachers, students and academics and brought together a wealth of experience and expertise in all aspects of children’s literature. My sincere thanks to all of them for their time, passion and wisdom and my congratulations to all who made it to the shortlist.”