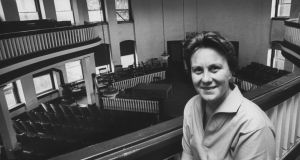 His name is William Maxwell. He works in the roughneck industries of mid-20th-century Alabama, rock breaking with explosives, pulpwooding, but mostly he’s a preacher, practising his craft in the rural churches and revivalist church missions of the black south.

There is something oversmooth about the handsome Maxwell, something not quite wholesome. The backbreaking, filthy work leaves him immaculate, unfazed. He delivered pulpwood to yards in three-piece suits. His clothing was made for him by the devil, people start to say. And then there is the death that follows him around, six people in all, including his brother and two of his wives. The first death is his wife Mary Lou, found in a car parked in a stand of trees just off Highway 22. She was beaten and strangled. Other victims had few or no apparent injuries, soft-footed death leaving the bodies more or less undamaged.

In the local telling, some ghost touch has carried them away, some shamanistic soul theft. In the syncretic south, voodoo and Christianity co-exist easily, but there’s nothing voodoo in the motive for the killings when you look closely. Each of the victims has been heavily insured by Maxwell, easy enough to do in the fledgling days of life insurance. Harper Lee wrote of Maxwell: “He might not have believed in what he preached . . . but he had a profound and abiding belief in insurance.”

Casey Cep’s book is subtitled Murder, Fraud and and the Last Trial of Harper Lee, but there is a bit of work to do before we get to the To Kill A Mockingbird writer and her late-career interest in the Maxwell case. There is an earnestness in Cep’s telling, a fact-checked stasis. You get a history of the insurance industry. You get a history of voodoo. On the death of Mary Lou we detour to the Scottsboro boys and the founding of the Alabama bureau of forensics, but you get the feeling that the real histories are just out of reach, undocumented in the savage reaches of the secessionist south.

Maxwell’s career came to an end at the funeral of Shirley Ann Ellington, Maxwell’s stepdaughter and another presumed victim. Her relation Robert Burns walked up to him and shot him three times. The headlines are theatrical: Voodooist is slain at Ala funeral. Tom Radney steps into the frame. Radney’s a white lawyer, the big man in town, who started out as an idealistic young politician, “Mr Democrat”, before ending up as a theatrical courtroom lawyer and local influence pedlar. Radney takes on the case of defending Burns. Radney has more than one iron in the fire here – he is also the lawyer who represented Willie Maxwell as he collected tens of thousands of dollars on each of the insured dead.

The southern courtroom swelters. The public galleries are packed. The judge is larger than life.

Cep holds back judgement on Radney, the small-town classicist and the hucksterish pursuer of multiple insurance policies following the more than suspicious deaths of six poor black Americans. There’s a tendency here to think the best of people, a mannerly distance in the prose which doesn’t quite nail Radney, whose courtroom is a place of gamesmanship and procedural browbeating rather than the elegant gavotte of morals you find in Mockingbird.

When Harper Lee finally gets on board you know what to expect. You get the full biography. Her childhood friendship with Truman Capote. The journey to publication of To Kill A Mockingbird and the overwhelming success. Lee travels with Capote to Holcomb in Kansas where Dick Hickock and Perry Smith were on trial for the murder of the Clutter family, the basis for In Cold Blood. Lee helps Capote organise his material, but in the end refuses an invitation to the execution of the two men, that particular necrotic small-town gala not for her.

Lee never managed to grab hold of anything which would work for her as a writer after Mockingbird. This is a problem. A writer not writing is at best a dull subject, at worst something you want to turn your eyes away from. And a drinker drinking can’t be honed into anything else. Lee stays in the Horseshoe Bend Motel in Alexander City during the Burns trial. She amasses material but there isn’t enough that is knowable for her to find a book. The fine moral structure of Mockingbird is absent and Lee knows it. It’s another disappointment.

Cep writes beautifully when she steps away from what feels like mid-Manhatten house style. “Ghost bells, war cries, the clanging of slave chains: if ever a land came by its haunting honestly it is eastern Alabama.” You find yourself wanting more of this, you want to get closer to Willie Maxwell’s dark heart. But you are up against the undocumented, oral histories, everything sealed in the hermetics of race politics, fear and suspicion.

Sometimes it takes more than dispassion and objectivity to get under the surface, to get close to James Agee’s “. . . effort in human actuality”. Capote knew this. It is why he invented sequences of In Cold Blood when reality wouldn’t do, the dead often more vivid than the living, the imagined more real than the actual, the work haunted by writers looking in the wrong places.

Eoin McNamee is the author of The Vogue