This Bloomsday, why not rub a bit of sacred against a spot of profane?

Like every Dubliner, in the end we are all bit players in short chapters within Joyce’s universe 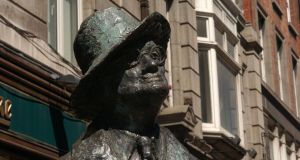 Who is the luckiest man in Dublin? I have been told on more than one occasion recently that I am. Right now I am charged with opening the wonderful new Museum of Literature Ireland (or ‘MoLI’, after Molly Bloom) in James Joyce’s old stomping ground of Newman House, the original site of UCD on St Stephen’s Green. The museum is a partnership between UCD and the National Library of Ireland, made possible through a significant donation from the Naughton Foundation and capital support from Fáilte Ireland.

We open later this year, and I hope the museum will be an oasis in the city for Joyceans and literature lovers of all ages. At the heart of the museum is a permanent exhibition of truly outstanding Joycean artefacts from the National Library and private collections. You will be able to see Joyce’s “Copy No.1” of Ulysses, which he inscribed to his patron Harriet Shaw Weaver, as well as several of his writing notebooks for that novel: the creative process in all its g(l)ory.

Every few Fridays myself and the museum staff have an informal debriefing meeting in a quiet office called Hartigans on Leeson Street. Above our usual seat is a framed photo of the 1985 James Joyce Summer School at Newman House. Aside from opening a major cultural institution in the next four months, it is a significant ambition of ours to have a photo of the opening of MoLI underneath that picture.

But I do have a slightly shameful confession to make – I am not a dyed-in-the-wool Joycean. I did read Joyce as a student, but in Trinity College Dublin. Not UCD, his alma mater. And while there, I’m afraid I received very poor marks in my Joyce assignments from one of our most renowned Joyceans, Senator David Norris. Joyce was not my forte.

While at Trinity, I had the misfortune of living in a draughty, run-down garrett on Eccles Street. The significance was completely lost on me, until Bloomsday one year when I looked out the window to see a crowd of men in straw boaters walking around looking confused and scratching their heads. They were outside my house, Number 73. Neither they nor I knew that No. 7 Eccles St had long since disappeared.

For our first date, I brought my wife to play tennis on Brighton Square, where I lived at the time. Any famous writers live there once? I won the match, which was probably not a great move, but six years later we got married on June 16th. As you have guessed by now, the other romantic significance of that date was completely lost on me.

To maintain what some of us in Dublin call a “Corporation Tan”, I swim in the sea at the 40ft all year round, and am more than familiar with the very particular effects of the Irish sea’s temperature on the male reproductive system. (Incidentally, the current water temperature is nearly 13 degrees - it still has the capacity to tighten scrotums, but not for much longer.) For a long time I wondered what that old Martello tower was for.

So you see, like every Dubliner, I am in fact a Joycean; in the end we are all bit players in short chapters within Joyce’s universe. As a Dubliner I cannot escape him, and notwithstanding my role in the museum, I am - we are all - living in his Dublin. It is a testament to what Joyce channelled about the city that it is still completely recognisable from his work, that any kind of walk through Dublin will reveal Joycean landmarks.

Even more importantly, though, beyond the streets, shops and businesses Joyce mapped out, he captured a kind of atomic essence of Dublin, its psychogeography, the psychology of the people, the blood cells travelling through the vessels of the civic organism. His Dublin really exists in the lived experience of the city.

Our city centre is a small place, walkable from top to bottom in about half an hour. The proximity of the sacred to the profane delighted him, and can continue to delight the rest of us. The city is all things to all people and is wildly alive, and Joyce remains the greatest chronicler of this life-force, our home.

Language was the molten rock that Joyce fashioned, our inherited and resculpted English - as George Bernard Shaw said, “the English language is our most priceless acquisition and conquest.” But that irreverent, subversive, child, and radically intelligent facility with language remains outside the walls we live and work in, and in the city that surrounds us.

So this Bloomsday, why not go out and find and experience that language, that irreverence, and rub a bit of sacred against a spot of profane. But please - try not to wake Molly up when you get in at 2am.

Simon O’Connor is the Director of the Museum of Literature Ireland, opening this Autumn on St Stephen’s Green.