The Way We Die Now by Seamus O’Mahony review: a doctor’s perspective 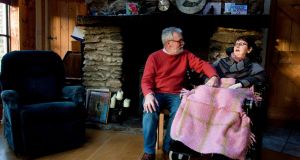 Whose choice? The late assisted-suicide campaigner Marie Fleming, who suffered from multiple sclerosis, with her partner, Tom Curran, in 2013. Photograph: Garry O’Neill

Woody Allen famously quipped: “I’m not afraid of death, I just don’t want to be there when it happens.” This probably captures how a lot of people feel about the subject, and perhaps, in particular, how they feel about medical doctors.

Death is often viewed as being a failure within the medical world. Modern medicine has sometimes been accused of helping us airbrush death from our lives by supporting the illusion that we are immortal. There is a murky, ambivalent psychological relationship between us humans and medicine when it comes to death. This is a relationship that has the propensity to change in a heartbeat. On the one hand, medicine colludes with the human tendency to avoid that which we most fear (death), and, on the other hand, medical teams can quickly become the focus of blame when death eventually occurs.

A strange saviour-failure dynamic can exist between the patient, their families and the medical team because death is seen as a failure and it often requires someone to blame.

Seamus O’Mahony’s book The Way We Die Now addresses many aspects of this murky relationship and provides us with a rare glimpse into this world from the vantage point of a medical doctor. This glimpse seeks to contextualise the greatest threat and fear of humankind: death. A couple of centuries ago, life expectancy averaged about 40 years; this figure has now almost doubled for most people. We are now much more likely to die from non-communicable diseases – such as cancer, for example – than were our ancestors, who generally died in childbirth or as a result of accidents or diseases. Thereby, the landscape of death and dying has changed dramatically, and it is rare we hear such personal and anecdotal comment on death and dying from a medical doctor.

O’Mahony, a consultant gastroenterologist at Cork University Hospital, makes the brave call for the demedicalisation of death and dying, and argues for a halt to the madness that characterises modern medicine’s culture of excess.

He accurately identifies the fact that the vast majority of us will die in an acute hospital or nursing home rather than a hospice setting. O’Mahony’s text is highly critical of acute hospitals, and illustrates, by way of personal experience, the environmental challenges of death in a busy acute hospital, as opposed to a hospice. He states that “the environment of the hospice is notable for the absence of chaos, squalor, frayed tempers and shabbiness”, and he also notes that “the squalor and chaos of the general ward is not in evidence”.

He is critical, at times, of those who staff acute hospitals, saying: “Christmas is excruciating in this regard: for two weeks, many hospital staff behave like five-year-olds who have had too many fizzy drinks.” He concludes that “The idea of ‘death with dignity’ in this sort of milieu is almost laughable”.

Moreover, he appears to be very sceptical of the Hospice-Friendly Hospitals Programme, the work carried out by the Irish Hospice Foundation to assist in improving the patient experience in the hospital environment. O’Mahony refers to the foundation’s “glossy policy document” and “celebrity endorsements” by drawing a rather unusual analogy between these policy documents and an inarticulate priest he knew as a boy. I suspect O’Mahony’s perspective on the Irish Hospice Foundation is at odds with that of many Irish people, who seem to hold the work it does in very high regard.

He draws an interesting parallel between our medicalisation of current social problems in acute hospitals (which he feels has transformed them into “dustbins” for all sorts of nonmedical problems) and how, historically, we did the same with our psychiatric hospitals. While this is a point worth consideration, it nonetheless overlooks the well-established link between investment in the provision of high-quality social and primary care so as to prevent acute hospitals being put under extra pressure.

Our historical use of psychiatric hospitals and our current configuration of acute hospitals share something critical in common – ideology. Both systems of “care” are ideologically driven, and many commentators would argue that as long as we have a two-tiered healthcare system, where medical treatment is determined by capacity to pay, our healthcare system will remain in crisis.

O’Mahony discusses the importance of ritual in dealing with death and writes movingly about the “bleakest funeral” of a friend in Amsterdam. The friend “had emigrated from his native west Cork more than 25 years before, and left behind all those things about Ireland he regarded and backward, such as religion. His funeral, therefore, was a singularly secular event.”

He refers to ritual as the preserve of organised religion and questions the need to reinvent the wheel. The complexity, the historical sensitivities and what many would see as a naturally evolving capacity of humanity to develop new death rituals is sadly missing from O’Mahony’s account. He goes on to say: “Ritual helps the dying too: In Ireland, the sacrament of anointing the sick carries a powerful significance even for those with little or no religious belief.”

This understanding of Ireland and what carries significance completely fails to capture contemporary Ireland, which is made up of tremendous ethnic, racial, sexual and religious diversity. It also fails to recognise how deeply distressing and sometimes re-traumatising religious practices and religious iconography can be for those who were brought up and abused in religious-run institutions.

There are two fundamentally important issues raised in this book, two issues of crucial importance to contemporary Irish society: assisted suicide, and advance healthcare directives. Perhaps the most disappointing aspect of O’Mahony’s study is how the author reduces these extremely complex issues to symptoms of our contemporary obsession with control and distraction. The complexity inherent in human beings deciding what kind of medical intervention they require in the event of becoming incapacitated is huge, as it is if they take the decision to end their lives. O’Mahony’s concluding comments on Marie Fleming’s battle to determine how she would die are concerning. He states: “Those who have suffered are regarded as having a special moral authority. We can acknowledge, and sympathise with, Marie Fleming’s suffering, but we cannot, as a society, alter our laws to indulge the fanciful notions, held by a single individual, of a special death.”

The often subjective and anecdotal position adopted in this book on two of the most important issues of our time is very regrettable.

O’Mahony presents a picture of palliative and hospice care professionals as being territorial and creating some kind of exclusivity and superiority when dealing with death and dying. He says of this that “care of the dying needs to return to the core of what doctors do, and should not become the exclusive preserve of palliative care specialists, no matter how caring, intuitive and charismatic they my be”.

Undoubtedly, The Way We Die Now gives us a rare glimpse into the world of death and dying from the vantage point of a medical doctor. The author asks some pertinent questions, including “Is there a better option?” as to how we currently die in Ireland. However, the over-reliance on, and extrapolation from, his personal experience dilutes the potency, and sometimes the credibility, of the challenges he raises for contemporary Irish society.

Paul D’Alton is head of the department of psycho-oncology at St Vincent’s University Hospital, Dublin, and is a former president of the Psychological Society of Ireland