The Trouble With Being Born (1973) review: Stand-up routine at the gates of hell 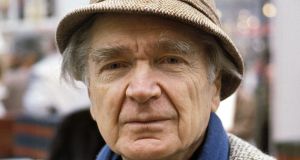 The philosopher Cioran in France in May, 1997. Photograph: Louis Monier/Gamma-Rapho via Getty

EM Cioran is the most addictive writer I’ve ever encountered. At the height of my fixation, anything I read that wasn’t him felt anodyne, trivial and longwinded. Born in Romania, Cioran wrote most of his savagely pessimistic books in French, having moved to Paris in the 1930s and settled into a “parasitical” life there. His writing desecrates humanity, progress, virtue, reality itself, and anything else that looked at him funny. Cioran lays it on so thick, the rancour is so extravagant, you start to wonder if he’s taking the piss. And that’s the thing: the writing is relentless and splenetic and nihilistic, but it’s never devoid of humour – a stand-up routine at the gates of hell.

No summary of Cioran’s thought can do justice to the visceral euphoria of reading him. Most of his ideas repackage the Eastern metaphysics of the Void and the Western sceptical traditions in which he was steeped; the distinction lies in his mode of attack, his ecstatic spleen. Scattered with autobiographical glimpses of a man at a comical extremity of torment, Trouble riffs on Cioran’s favourite themes: suicide; metaphysical exile; disdain for humankind (“that hideous and immemorial riffraff”); civilisational decline; the unreality of existence, and the wisdom of cultivating “the long serene disgust of detachment”.

For all his scepticism, Cioran strikes me as an essentially religious thinker, transfixed by ultimate questions, although for him any divine Architect is a drunkard and a hooligan, at fault for a “botched Creation” wherein even suicide isn’t worth the effort, because it always comes too late.