Murder Most UnLadylike: The Robin Stevens series brings the whodunnit to young readers 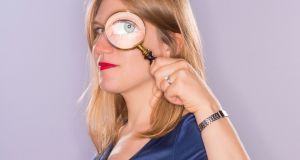 Robin Stevens: I feel a real responsibility to all of my readers, especially readers who are vulnerable.

When Robin Stevens was twelve years old she read a book that would ultimately change her life. It was Agatha Christie’s groundbreaking 1926 novel The Murder of Roger Ackroyd. “It blew my mind,” says Stevens. “I really wasn’t expecting the twist that’s in that book. And it hooked me for life.” Now it’s Stevens herself who is introducing younger readers to the joys of an unpredictable whodunnit, as the author of the wildly popular and hugely entertaining Murder Most Unladylike series.

Set in the 1930s, the books follow the adventures of youthful detectives Daisy Wells and Hazel Wong, who are both pupils at Deepdean School for Girls. Over the course of seven books Daisy and Hazel have solved murders in their school, a country house, a Cambridge college, a theatre, Hazel’s native Hong Kong and even on the Orient Express. The stories are essentially a mixture of two beloved genres: the golden age murder mystery and the classic boarding school story.

Thanks to her father, who passed on his childhood favourites, 31-year-old Stevens grew up reading Enid Blyton’s Mallory Towers and St Clare’s school stories before heading off to boarding school herself.

“[School] was great, I really enjoyed it, but it wasn’t exactly like Enid Blyton,” she laughs. “I was expecting more midnight feasts and pranks, and it was a little more like real life.” Why does she think boarding school settings have always appealed to readers? “There’s something fantastic about a boarding school setting. It’s so enclosed and cut off from the world that it seems like secrets are going on there, and you just want to know what’s happening.”

'Since I first made Hazel up, my books have become a lot more aware of how careful and sensitive an author has to be'

Secrets also abound in Stevens’s beloved classic crime fiction. Her genuine and abiding love of classic crime novels isn’t straightforward, however. “It’s a complicated love because they’re problematic,” she says. There are ugly moments of racism, homophobia and anti-Semitism, some of which didn’t register with Stevens until she was in college. “When I recommend Agatha Christie or any golden age writer to kids now, I say ‘these are great plots but think about what she’s doing’. I still feel like I can recommend them but I understand why some kids might not enjoy them.”

In a way, Stevens’s books are a response to the bigotry of golden age crime writing. Her heroine and narrator Hazel is Chinese, her friend and fellow detective George Mukherjee is Indian, and in the seventh book in the series, Death in the Spotlight, a major character comes out as gay. Hazel and Daisy were inspired by Stevens’s own boarding school friend group, which included girls from Hong Kong as well as posh white backgrounds. And as a white author, she makes an effort to ensure Hazel’s voice feels authentic.

“Since I first made Hazel up, my books have become a lot more aware of how careful and sensitive an author has to be to write any character who doesn’t exactly match their own experiences of life because there is a lot you can get wrong,” she says. “So I do a lot of research but I also draw really heavily on sensitivity readers.” That means asking people whose experiences are closer to those of the characters to read the manuscript and highlight potential inaccuracies and clumsiness.

“I realise when I was creating George [that the book] might get to publication without him being seen by anyone but white women,” says Stevens. “And there could be problems we just don’t see because for all our trying, we don’t share those experiences. That’s when I started using sensitivity readers. I worked with [literary consultants] Inclusive Minds and that was so helpful. It would be great also if publishing became more diverse and there were a multiplicity of voices reading and editing a book.”

Stevens’s husband, Irish writer and editor David Stevens, is the co-founder of Knights Of, a publisher committed to celebrating a diverse range of writers.

“I think it’s really important for all authors to write worlds that are as diverse as real life,” she says. “I see with kids from different backgrounds who come up to me how much it means to see someone like themselves in a book being heroic, being the star...But I know I have to be careful with it, and I’m more aware with every book I write that there are some stories that maybe another author is more suited than me to tell. It’s a delicate balance.”

'There are a lot of stories to tell, a lot of interesting characters - and I have a lot more ideas for murder!'

Stevens has seen that characters like Hazel and George help children avoid seeing “white” as the default. “When I do workshops with kids and I and mention that Hazel is Chinese and George is British-Indian and tell them to make up detectives, they make up detectives from all over the world, all different backgrounds and races. But if I don’t [mention that], their detectives will all be white. You need to show kids that the world of books can be diverse in the same way the real world is.”

Stevens is aware of the recent criticisms of Irish author John Boyne’s new novel My Brother’s Name Is Jessica, the story of a boy whose sibling is transgender, and Boyne’s subsequent article in this newspaper. “When people ask me ‘can you give me rules about what artists can or can’t write’, I think that those are things only individual authors can decide for themselves. But I definitely feel a real responsibility to all of my readers, especially readers who are vulnerable, and that especially includes my LGBT-plus readers.”

Stevens has been vocal in her support of Mermaids, the UK charity that supports transgender young people. “I want to stay positive about this kind of thing and be supportive rather than getting into discourse about other authors.”

Stevens’s eighth book, Top Marks For Murder, will be published in August, and it won’t be the schoolgirl detectives’ final case. “I would like to stay in the world of Daisy and Hazel for a long time,” she says. “There are a lot of stories to tell, a lot of interesting characters - and I have a lot more ideas for murder!”

What a World! Authors 4 Oceans: Robin Stevens & Lauren St John with Flossie Donnelly and Murder Most Unladylike with Robin Stevens both take place at Smock Alley Theatre, Dublin, on May 19th as part of the International Literature Festival Dublin. Get tickets at www.ilfdublin.com