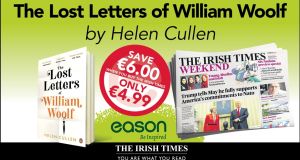 It’s been another good week for Irish writing, with Sally Rooney’s Normal People pipping Michelle Obama’s Becoming at the Book of the Year at the British Book Awards, while Norma MacMaster, Sheila Llewellyn and Niall Bourke are in the running for Society of Authors awards. Dubliner Eamon McGuinness won the £2,000 Michael McLaverty Short Story Award, and Irish nature writer and essayist Kerri ní Dochartaigh signed a deal with Canongate to publish her debut book, Thin Places, after a six-way auction. On the downside,UCD’s Campus Bookshop, run by the Hanna family for more than 40 years, is to close, although the university is confident a new tenant will be found in time for the start of the new academic year. Banshee, the Dublin literary journal, has published its first book, Paris Syndrome by Lucy Sweeney Byrne, who featured in its first edition.

Coming up in Saturday’s books pages, Naomi Wolf talks to Fionola Meredith about her new book, Outrages, which Margaret Ward reviews next week. Patrick Lonergan, author of Irish Drama and Theatre Since 1950, looks at the cyclical nature of some of the problems that have beset the stage. Weekend Review carries an extract from Seamus Mallon’s important political memoir, A Shared Home Place, which Diarmaid Ferriter reviews next week. In the Magazine, Sara Keating looks at one of the children’s events at ILF Dublin. And we have two poems, by Alannah Hopkin and Greg Delanty, in memory of Liam Ó Muirthile.

We have some excellent reviews, including: John Connolly on Cari Mora by Thomas Harris; Michael Cronin on three books up for next week’s Man Booker International prize (The Years by Annie Ernaux; Celestial Bodies by Jokha Alharthi; and Juan Gabriel Vásquez’s The Shape of the Ruins – translated by Anne McLean, Alison Strayer and Marilyn Booth); Susan McKay on Home Grown by Joan Smith; Aoibheann Sweeney on The Last Leonardo by Ben Lewis; Ruairí Quinn on Shenanigans by Trina Vargo; Laura Kennedy on Once More We Saw stars by Jayson Greene; Peter Murphy on Lowborn by Kerry Hudson; Anna Carey on The Doll Factory by Elizabeth Macneal; Sarah Gilmartin on Jessica Andrews’ Saltwater; Declan Burke on new crime books by Dave Duggan, Oliver Harris, CL Taylor, JM Alvey and Peter Heller; and Rob Doyle on Tropisms by Nathalie Sarraute, translated by Maria Jolas.

And finally, The Lost Letters of William Woolf by Helen Cullen is this weekend’s Irish Times Eason offer. The acclaimed debut, which has been optioned for TV by the makers of Downton Abbey, can be purchased for just €4.99, a €6 saving, when you buy a copy of The Irish Times at any Eason store. Read our review here.