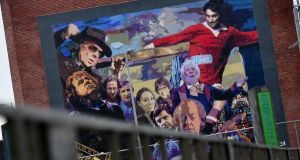 For some the term “Protestant imagination” leads to the same head-scratching as “married bachelor” or “square circle”. The two words make sense in isolation, but when put together one seems to cancel the other out. This is where Gerald Dawe’s essay collection, The Sound of the Shuttle, begins, challenging the often unspoken yet conscious conviction in Ireland and Britain that Ulster Protestants are to the imagination and the arts what rainwater is to the campfire. And the extent to which this view has been received, incubated and amplified is a central concern of Dawe’s analysis. The Sound of the Shuttle has arrived at a time when interest in cultural Protestantism, or “Protestant culture”, has rarely been higher, with a 2019 conference in east Belfast, The Protestant Imagination, implying that there must indeed be such a thing.

These essays do not so much present an economically or efficiently expressed argument, but after a couple of pages Dawe has already trained his reader’s expectations. To read Dawe on Irish literature, the hunger strikers or cultural Protestantism is not to be taken from point A to point B, a linear journey from issue to solution, but is to be invited into a non-dogmatic, remarkably open exploration. And in this way, Dawe’s writing style is, after all, his most potent – if implicit – argument. It has been corridored dogmatism that has led to the entrenched and self-harming notion that northern Protestants lack culture and imagination. Dawe’s collection of essays trouble this characterisation basically by ignoring it – to defend the Protestant imagination is, it would seem, to have already given too much ground.

1 Coronavirus: Ireland should ‘look seriously’ at closing borders to keep new infections out
2 A letter to Ireland from Italy: this is what we know about your future
3 'The last time I saw her was when she was being put into the ambulance'
4 Sam McConkey: Tough next steps against coronavirus will require political consensus
5 Workers may face tax bill on emergency State wage subsidy
6 Coronavirus and children: The red flag symptons to watch for
7 10 hilarious Irish comedy videos to watch on YouTube
8 Insolvency lawyer warns of ‘disaster’ if firms reject Covid-19 wage subsidies
9 Trump boasts of coronavirus ‘ratings’ as top expert warns of up to 200,000 US deaths
10 Coronavirus: ‘Fundamental shift’ in electricity use, says Eirgrid
11 People should carry ‘evidence’ of travel reasons if exceeding 2km limit
12 Cocooning Q&A: How does it work? Who must do it? Can people visit my home?
13 Ken Early: Despite coronavirus, Premier League season must be finished if at all possible
14 Engineers gather to produce ‘battlefield’ ventilator in war on Covid-19
15 Una Mullally: Coronavirus response is like providing fire exits only during a blaze
16 Restoration of historic Phoenix Park cottage approved
17 Police investigating after Jack Grealish is pictured at a road incident
18 Brown Thomas and Arnotts suspend online offerings
19 Coronavirus: New measures for nursing homes amid concern over 17 clusters
20 Hospital consultants to be offered three-month contracts to see only public patients
21 Coronavirus: Medical staff may face ‘emotional distress’ over patient prioritisation
22 No room for bulls**t in the time of coronavirus
23 If you think governments are spending money now, just wait
24 Late Late Show with Miriam O’Callaghan: The most surreal primetime TV I’ve ever watched
25 Coronavirus: Construction sector most significant part of new shutdown
26 Covid-19 crisis to wipe out Q1 housing market recovery
27 Grafton closes Woodies DIY, Glenveagh closes construction sites
28 Man who allegedly spat at garda brought to court by gardaí in protective gear
29 EasyJet grounds entire fleet as coronavirus pushes airlines to brink
30 Coronavirus: Nagging doubts fill hospital staff’s heads
31 AIB and Bank of Ireland suspend shareholder dividends
32 Coronavirus: Japan accused of understating figures because of Olympics
33 Coronavirus: Government publishes list of essential services
34 Labour TD says party should consider taking part in government
35 David McWilliams: We need to totally reimagine economics
36 In pandemic, individual rights secondary to those of public
37 My favourite sporting moment: When Zidane glided through Brazil in 2006
38 Remote working doesn’t suit everyone, and it exposes woolly leadership
39 ‘Magnificent’ Conor Connelly remembered after sudden death
40 Irish in ‘good spirits’ as plane leaves Peru for Dublin
Real news has value SUBSCRIBE