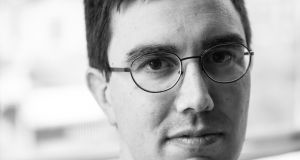 ‘Errors can’t always be undone. For those of privilege, this is always a revelation.” Twenty-nine-year old creative writing student Ed is a modern-day seer, dispensing wisdom on the world around him in the clipped tones of a fortune cookie. His girlfriend Taylor, his sister with learning disabilities Ellie, his long-suffering father, his pot-smoking creative friends are all outsiders, their behaviours analysed by Ed’s watchful eye.

But the biggest outsider in Ted McDermott’s absorbing debut novel is Ed himself, an older, more fatalistic Holden Caulfield who judges society from afar. In Missoula, Montana, “a town as orderly and idyllic as the landscape a model train loops through”, Ed spends most of his time getting high, “but not too high. Just high enough to make everything a little less like it was.”

Ed gives the odd lecture to younger students on his creative writing programme, hangs out in dive bars with arty friends, and shies away from working on his failed four-year-old draft of Ransacked, “a novel about homelessness, as narrated by an accused and jailed paedophile. It was false and tame and Ed hated it.”

Enter Taylor, a beautiful and bright creative writing student in her early twenties, who Ed falls for immediately and pursues relentlessly. The couple’s heady first few weeks give way to darkness when Ed is diagnosed with a rare hereditary condition that causes tumours to grow throughout his body. The schwannoma – mostly benign tumours that may become fatal if they spread to the brain – hang over the couple and the narrative like a timebomb. With his measured and beautifully clear prose, McDermott asks the reader to consider how they might live in such a scenario.

Ed is left to wonder about the hiss of static in his ears, whether he might be going deaf, whether every twinge or headache might indicate a tumour “growing inside his brain, something hard and smooth and white and egg-shaped”. The doctors are clear on the possible side-effects – brain disease, erectile and bladder dysfunction, death – but can offer no solutions except the hope that science will “someday” find a cure.

The not knowing is what’s really hurting Ed, who sets about destroying his life and relationship in a drily funny, methodical manner. With an honesty and fatalism reminiscent of the writing of David Foster Wallace, McDermott presents an unpretentious narrator, a man on the edge who thinks he has nothing to lose. As Ed pushes Taylor away, he admits: “The idea of punishing her appealed to him, so long as he could deny that he was doing it.” His illness, and Taylor’s own revelation later in the book, make for an urgent portrayal of love and its disintegration.

Make-out sessions are “intense as a fist fight”, with Taylor another interesting, multilayered character. Her surface all-American cheerleader persona gives way to a complex history of a relationship with “a guy she’d barely married”. A story within the story brings a convincing shift to her voice and a metafictional tale of another couple in trouble.

The pace of the novel hurtles along with the character developments, as Ed’s infidelity brings further chaos to his actions. There is a Russian-roulette effect to the storytelling that will keep readers turning the page. McDermott was born in Delaware and his fiction and non-fiction have appeared in VICE, Believer, Portland Review and Minus Times. In 2009, he was nominated for The Essay Prize. The Minor Outsider is published by ONE, an imprint of Pushkin Press that launches one debut a season. Its most recent, Whispers Through the Megaphone by Rachel Elliot, was longlisted for this year’s Baileys Prize for Fiction, with last year’s The Fishermen by Nigerian author Chigozie Obioma shortlisted for the 2015 Man Booker.

McDermott’s novel is equally impressive, focusing on life’s contradictions and absurdities, with its title a nod to Camus’s absurdist masterpiece. Ed continually finds himself doing one thing and desiring another: “He always talked himself out of what he wanted”; and “Only the truth is worth recording, so he wrote nonsense in his notebook”.

In its sharp take on the indulgences of the creative set, the novel recalls Rachel Glaser’s excellent debut Paulina and Fran. In The Minor Outsider, the creative programme is “like a high school where angst had been replaced with irony”. On his closer relationships, Ed’s insights are at their most poignant. He watches his sister Ellie, now in her 30s, unable to participate in a neighbourhood game: “Ed felt overwhelmed by how hard her life must be, being laughed at by children, too ignorant even to understand why.”

Ed’s ability to pinpoint his own plight and that of those around him makes the novel sing. As his world unravels in extraordinary yet credible threads, at the back of it all, Ed knows: “His problem wasn’t the tumours but the way his brain became their victim.”