The locked room mystery: a glimpse inside the mind of Agatha Christie

John Curran, author of The Notebooks of Agatha Christie, on the thrill of exploring the treasuire trove of the author's 73 jotters packed with plots and possibilities 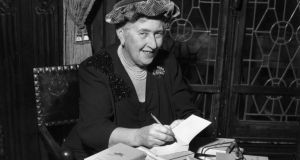 John Curran on Agatha Christie: “If I learned anything from my study of the Christie Notebooks – and my deciphering of her frequently indecipherable handwriting – it was that to create a story that reads easily, you need to work very hard.” Photograph: Hulton Archive/Getty Images

I first saw the Notebooks of Agatha Christie on Friday, November 11th, 2005. Her grandson, Mathew Prichard, had invited me to spend the weekend at Greenway House, the Georgian mansion, bought by Christie in 1938, on the banks of the River Dart outside Torquay. At that point still in private hands, it now belongs to the National Trust and is a hugely popular visitor attraction for Christie aficionados the world over.

At the top of the stairs were two locked rooms, silent guardians of literary treasure and heart’s desire for the Christie enthusiast. The bigger of the two contained a complete run of British and American signed, jacketed first editions (all now on display to visitors). The second, a long, narrow room of shelves and cupboards, held yet more Christies, signed hardback and paperback; along with typescripts and manuscripts, letters and contracts, posters and playbills, photos and dust-jackets, scrap books and diaries. And on a bottom shelf was an ordinary cardboard box with a collection of old exercise copybooks...

There are 73 Christie Notebooks, the earliest dating from before her career, the last with notes for a book that she would not live to write. In these unimpressive jotters she scribbled ideas for plots, notes for characters, possibilities for settings. Here she experimented with stage adaptations, wrote travel diaries – she was a lifelong traveller – compiled lists of Christmas presents, kept bridge scores and solved crossword clues. There are notes for all but a half-dozen of her novels, many of her stage plays, some short stories and her autobiography. And, most fascinating of all, are those jottings that got no further than the page on which they appear; what I call her “Unused Ideas”. Her existing impressive literary output – 66 novels, 150 short stories, 18 plays – did not exhaust this fund of ideas, which seemed, quite simply, infinite.

Her family and her publisher were anxious to share this treasure trove with her legions of readers and my two books, Agatha Christie’s Secret Notebooks (2009) and Agatha Christie’s Murder in the Making (2011), helped shed light on the creative process of this most reclusive of bestsellers. If I learned anything from my study of the Christie Notebooks – and my deciphering of her frequently indecipherable handwriting – it was that to create a story that reads easily, you need to work very hard.