Essays: Like a course in reading and writing fiction for the price of a book

Book review: Lydia Davis’s collection focuses on English language authors as well as her own writing 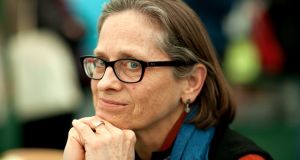 Lydia Davis, winner of the 2013 Man Booker International Prize, is as renowned for her translations of complex French literature as for her own fiction. Photograph: David Levenson/Getty Images

If anyone exemplifies the 21st-century woman of letters it’s Lydia Davis. Best known on this side of the Atlantic for having won the Man Booker International Prize in 2013, she has become as renowned for her spirited translations of complex French literature as for her own fiction, which tends to be short and sharp, gathered together in collections with smart ticklish titles: Samuel Johnson is Indignant; Varieties of Disturbance.

Her influence is so great that not only was she asked to translate the first volume of Proust’s À la Recherche du Temps Perdu for a new edition, but the publishers allowed her to change the English title from the traditional Swann’s Way to The Way by Swann’s.

Now we have her first volume of collected non-fiction, unassumingly but unarguably titled Essays. The focus is on English language authors (she plans another volume on translation) and, above all, Davis’s own writing: where it comes from and how it works.

This last point in its own right makes Essays a valuable collection: so clear and honest is Davis in her forensic exploration of how her work is formed that it also feels like prying, or – put another way – a free course in reading and writing fiction for the price of a hardback book.

In four essays subtitled Forms and Influences, Davis writes about how she started out trying to be a New Yorker sort of short story writer – marked by “good writing and editing, urban wit and sophistication” – but “I found the writing difficult; it was pleasurable or exciting only at moments”.

She gives an example of how one of her early stories appeared – it was, like many respectfully regarded stories, full of inessential details and traditional syntax in order to bring the story to the reader and make the reading as effortless as possible.

But writing is work, often hard work, so why shouldn’t the reader meet the writer part way? Davis settled on a different path, where stories are whittled down to their essence and all the boring stuff is taken out. It might not be to everyone’s tastes, though Davis rejects the term ‘experimental’ for her work, on the basis that an experiment requires a plan and she has never been “sure exactly what I’m doing.”

She is firmly of the view that “any piece of writing [...] has only a particular, and limited, audience or readership. It is not necessary to try to appeal to everyone, or even to explain oneself.” The detailed accounts of her writing process in these essays feels like her getting all of this out of her system.

One of Davis’s turning points as a writer, she says, “was the realisation that I could, with great satisfaction, write fictional stories that were accounts of actual events, only thinly disguised”. Indeed, readers of her last story collection Can’t and Won’t will be familiar with Davis’s use of dreams as inspiration, but here she also shows how she has made use of emails from strangers and notices in public places as source material.

Her revisions to these pieces show how important it is not to make the result too “writerly” when it was the lumpy nature of the raw material that made it appealing to begin with – indeed, Davis does not always succeed and one of the examples given, Nancy Brown Will Be In Town, remains funnier in the form of the original email that she shares with us.

David also writes convincingly about other writers and visual artists. Her approach to the latter is methodical and focuses largely on the physicality of the art – the colours, the patterns, the arrangements – with little on the artists themselves or the personality or politics behind the work, which is a striking difference from other “literary” art critics such as Zadie Smith or Janet Malcolm.

On writers, she reminds us that Madame Bovary’s realist approach – no idealising, no moral – is hard now for us to see as radical because it “permanently changed the way novels were written thereafter, and so its approach by now seems completely familiar to us”. Perhaps the warmest piece of all in Essays is a portrait of the French modernist writer Maurice Blanchot, whose essays had been the “most difficult” translations she had undertaken: the close work and contact required with Blanchot built a permanent affection.

Other essays provide a valuable guide to books we will never read, such as Stendhal’s biography The Life of Henry Brulard or Michel Butor’s Degrees, a 450-page novel set entirely in a train compartment. Davis’s Essays, a 520-page book set entirely inside the author’s capacious brain, should never suffer such abandonment.