My Enemy’s Cherry Tree review: Taiwanese tale too short for its ambition 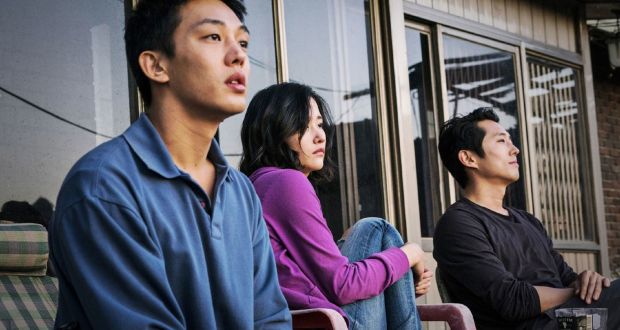 Chang-dong Lee’s Burning, based on a Haruki Murakami short story, Barn Burning – both have a similar premise but the first two are more assured than Wang’s book

While an author’s private life is usually off limits in a book review, Wang Ting-Kuo’s biography, supplied by the publisher, is one of the most intriguing I’ve come across: “He began writing fiction when he was 18 and quickly took the literary world by storm, only to disappear from the scene when his soon-to-be father-in-law gave him a devastating ultimatum: either give up the precarious life of a writer or give up my daughter. Having made his fortune, Wang returned with a vengeance after a 25-year absence.”

That alone makes this a novel of interest as it leaves so many questions unanswered. How did he make his fortune? Has he been embittered over the last quarter century since his forced retreat from words? Did the old man die and, if so, how soon afterwards did Wang begin writing again? The whole thing is shrouded in mystery and not a little romantic charm.

My Enemy’s Cherry Tree has been quite the success in the author’s native Taiwan, winning many awards and selling like hot-cakes but, after a promising start, the overall sensation is of a curiously sterile book, heavily influenced by works from more established Chinese, Taiwanese and Japanese authors, and one that ultimately leaves the reader a little dissatisfied.

The novel tells the story of a lonely and insecure man who, against all his expectations, falls in love with and marries a beautiful young woman, Qiuzi. They are initially happy but when she takes up photography as a hobby, she falls under the spell of a local philanthropist before disappearing without trace. Hoping that she’ll return one day, her husband sets up a coffee shop in her favourite place, living in a small loft above it, even though, as is repeatedly pointed out to him, it’s not a particularly good place to establish a business.

The publishers describe it as Haruki Murakami meets Indecent Proposal, a strange description that perhaps does the novel no favours

Becoming convinced that the philanthropist in question, a wealthy businessman named Luo Yiming, is responsible for his wife’s disappearance, his mind spirals with conspiracy theories, pain and sporadic fury while, at the same time, he recalls the happy times he spent with Qiuzi when he was employed by a building firm, selling properties above their true value to unsuspecting low-income workers. He likes to think of himself as a moral man but is troubled by how he set his scruples aside during this period of his life and wonders whether there may not be an element of karma in his subsequent loss.

By coincidence, I read My Enemy’s Cherry Tree on the same weekend that I watched Chang-dong Lee’s excellent movie Burning, which in turn is based on a Haruki Murakami short story, Barn Burning. Both the film, the story and this novel have a similar premise – boy meets girl, girl meets someone else, girl goes missing, boy blames the other guy – but the first two are more assured than Wang’s book, which seems uncertain whether it aspires to being an examination of business ethics in modern day Taiwan, a thriller, a love story or a surrealist study of obsession and vengeance. If skilfully fused, all these elements can work perfectly well alongside each other but in a novel as short as this, they tend to become a little confused, as each one strives to make its voice heard. Ultimately, the cacophony of influences and styles overshadows the novel’s grand ambition.

That said, there are many admirable moments. The narrator’s description of his father’s suicide and the subsequent effect on his life of this tragedy is both moving and acts as a powerful counterpoint to his desperate need to achieve success in his work and personal life. The scenes between the newlyweds are well crafted, with both the tenderness of first love and the innocence of the young naive couple carefully portrayed on the page. And like many novels from Chinese or Japanese writers, a sense of mystery hangs over the story, an other-worldly elusiveness that makes one wonder whether Qiuzi has actually vanished into thin air or ever existed at all.

In one of those curious lines that are often used to promote books, the publishers describe it as Haruki Murakami meets Indecent Proposal, a strange description that perhaps does the novel no favours, for it’s not the equal of the former and is far superior to the latter. Twenty-five years is a long time to spend between books and Wang’s father-in-law may have a lot to answer for in leaving the writer a little rusty, but perhaps his time away from the page has provided a taster for more original novels in the future.