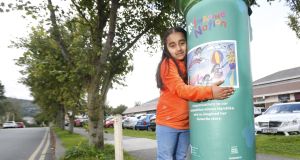 Harshika Kaur, one of the winners of this year’s An Post and Children’s Books Ireland Re-ImagineNation Competition.

The Boy From the Woods by Harlan Coben is this week’s Irish Times Eason offer. You can buy a copy of the bestselling thriller writer’s latest work for €4.99, a saving of €7, when you purchase the weekend edition of The Irish Times in any branch.

In The Irish Times this Saturday, Michael Harding discusses his latest work, What’s Beautiful in the Sky: A Memoir of Endings, with Patrick Freyne. Reviews include Diarmaid Ferriter on Here’s the Story by Mary McAleese; Rabeea Saleem on The Nine Lives of Pakistan: Dispatches from a Divided Nation by Declan Walsh; Helen Cullen on Just Like You by Nick Hornby; Clement Knox on Wolfram Eilenberger’s Time of the Magicians; Kerri Ni Dochartaigh on Suppose a Sentence by Brian Dillon; Sarah Gilmartin on Pizza Girl by Jean Kyoung Frazi; and Claire Hennessy on the best new YA fiction.

An Post and Children’s Books Ireland have announced the young winners of their Re-ImagineNation Competition. Working with children’s book artists Fatti Burke, Jennifer Farley, Tarsila Krüse and Alan Nolan, this summer the Re-ImagineNation competition encouraged children aged 6-12 from all over Ireland to re-imagine themselves as a character in a favourite book, and enter the competition by creating an artwork of themselves in a scene. The work of the competition winners, Elias Lawlor and Harshika Kaur, can now be seen on post boxes at 95 Sandymount Road, Dublin 4 and Sandyford Hall Avenue, Dublin 18.

You can listen to the Talking Translations podcasts and read the texts here or on Apple Podcasts, Spotify, Google Podcasts, and other podcast discovery platforms.

“We are delighted to present an excerpt of Colum Mc Cann’s novel Apeirogon read by the author in English and in Arabic by the Palestinian translator, Sawsan Obeid. At a time when writers cannot travel, Literature Ireland’s Talking Translations podcasts aim to bring the best of Irish writing to greater attention internationally. In this way new, deeper connections can be built between Irish writers and their translators and with key foreign publishers and festival directors. Talking Translations podcasts are also simply for anyone around the world who enjoys listening to good literature,” said Sinéad Mac Aodha, director of Literature Ireland.

Throughout autumn/winter 2020, the Talking Translations podcast will feature Irish short stories and excerpts from novels, read by the writers themselves, as well as in a new translation by a specially-commissioned translator.

Next up, Cathy Sweeney will read a short story from Modern Times, with a translation by Jerzy Kozlowski into Polish. Future episodes will feature a section of This Happy by Niamh Campbell, translated into Spanish; the opening pages of Leonard and Hungry Paul by Rónán Hessian, translated into Swedish; and Caoilinn Hughes reading from The Wild Laughter, accompanied by a Spanish translation.

In tribute to Maeve Binchy and her support for Irish writers, Echoes festival is giving away five #ReadIrishWomen #EchoesOfMaeve gift packages this October. Each gift contains two books: one by Maeve, specially signed by her husband, writer Gordon Snell; and one by an Irish author and previous Echoes guest - Andrea Carter, Henrietta McKervey, Sheila O’Flanagan, Jo Spain and One City One Book author Christine Dwyer Hickey. The competition runs October 2nd-4th - visit echoes.ie for details. An interview ‘At Home with Gordon Snell’ goes live on echoes.ie on Sunday, October 4th. Featuring Ireland’s Hidden Stories, the festival returns to Dalkey Castle and Heritage Centre on October 1st-3rd, 2021.

Acclaimed Colombian writer Jorge Franco is participating in the Words Ireland Mentoring Programme 2020, supported by the Colombian embassy in Dulbin. Franco, as well as mentoring Irish writer Lucy Moore, will also give an online masterclass, aimed at previous and current mentees of the programme, on October 13th at 5pm. His latest novel, Shooting Down Heaven, was published in English in June by Europa Editions, translated by Andrea Rosenberg.

Emily in Paris: If it was Dublin, she’d be shifting Colm Meaney in the Leprechaun Museum
4 Princess Diana's driver takes many secrets to grave
5

Living with Prince: ‘I think it’s time you got birth control’
Real news has value SUBSCRIBE