All Gates Open: The Story of Can review – Rock at its most exotically mysterious 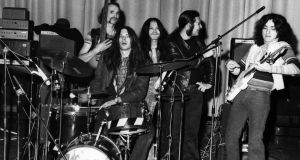 Book Title:
All Gates Open: The Story of Can

In the archipelago of post-1960s rock, Can looms up like some unholy cross of carved colossus and amorphous sea monster. More out-there than Pink Floyd, less pretentious than prog rock, Can wedded the electro-acoustic methods of avant-garde composition to the visceral force of the rock group. “A strange, unique band of intellectuals struggling to make people’s music in a prevailing anti-cerebral climate,” as one contemporary reviewer put it.

Founding members Irmin Schmidt and Holger Czukay (parents’ occupations: architects, homemakers and Nazis) each had a conservatory training. Indeed, you can gauge the band’s social background by the influential allies at hand when their Japanese vocalist Damo Suzuki was going to be deported by the West German authorities. Karlheinz Stockhausen wrote an open letter in the national press (“Do not lump such artists alongside criminals and parasites. Society dearly needs birds like these”) and the head of Cologne’s Westdeutscher Rundfunk interceded on Can’s behalf with the West German foreign minister.

Initial inspiration was transatlantic. When in 1966 Schmidt was in New York to take part in a conducting competition, he dossed off and stumbled upon the early minimalism scene, performing repetitive music with Terry Riley (“At first I thought this was totally stupid”). Once home, Schmidt proposed forming a new music group to Czukay and another Stockhausen associate, David Johnson (who subsequently left), enlisting thereafter young rock guitarist Michael Karoli and drummer Jaki Liebezeit, the latter a mutineer from free jazz (“there was no real freedom in it”). Schmidt’s wife, who worked in finance, grounded the project in German pecuniary prudence.

Courtesy of a rich friend, Can holed up together in Schloss Nörvenich, before later decamping to an abandoned cinema near a small village. At each site they set up their Inner Space studio, a living space kitted out with ever-ready recording equipment. Can’s approach was to play for hours, record everything, then edit together compositions. This was art with no single author: a collective machine-like interface for producing unforeseeable sounds. “What we did was not improvisation in the classical jazz sense,” Czukay remarks, “but instant composition. Permanent surprise.”

The agreed-upon home for weird sounds, as everyone knows, is movie soundtracks, and accordingly it was there that Can first made a name. An early highlight, with initial African-American vocalist Malcolm Mooney, is Father Cannot Yell, a tormented psychobabble that looks ahead to the nihilistic No Wave music of a decade later. Mooney lived it as he sang it: when Can appeared at a highbrow art opening, he surreptitiously sold off some of the artworks outside the venue, to the horror of the artist. Mooney later bowed out of the group with mental health problems.

I am Damo Suzuki

Can’s new vocalist was found on the street. “I was sitting with Jaki in a cafe,” Czukay says, “and Damo came along and he was making an incantation to the sun or something strange like that. I said, “Jaki, this man will be our new singer.’ ” Inviting the randomer Damo Suzuki to play a concert with them that night was a chance-based attitude consistent with the group’s artistic ethos.

Exotic mystery is rock’s lifeblood, and Tago Mago and Ege Bamyasi, the first full albums with Suzuki, have it in spades. Suzuki (who got the name “Damo” during a spell living in Ireland) exhibits at times a vocal approach along the Dadaist lines of Kurt Schwitters: “Stone Age people singing a strange kind of language,” as he says. Although the music is often poppy, at other times it’s not a stretch to regard it as popular modernism, arising from the same source as Picasso’s Les Demoiselles d’Avignon or Leonora Carrington’s atavistic sculptures.

Tago Mago is psychedelia’s acme, things familiar rendered full of dread, smears and wonder. Its standout track, Halleluhwah, is like a tribal carnival occasioned by the discovery of a diamond/bread hybrid. Underpinned by intense funk, overladen with gibberish lyrics, Halleluhwah seems to climax at its highest possible point, before proceeding to go higher still, reaching an empyrean apex 15 minutes in, when the drums and synthesisers explode in a shimmering harmonic cluster.

Like Miles Davis’s contemporary records with Teo Macero, the music is stitched together from various recordings. Francis Bacon once said of his intuitive working methods that they “made images the intellect would never make”. Theorising only gets so far; what happens on the anonymous plains of the canvas is something else. Can harnessed this unconscious zone to create bizarre acoustical brilliance. That said, after the initial albums, there was the usual long tail-off. Suzuki left the band to become a Jehovah’s Witness.

All Gates Open has an unusual format. The first half comprises Young’s biography; the second, a scrapbook of diaries and other material from Irmin Schmidt (including an interview with John Malkovich, for some reason). Young’s biography is engaging if overlong; the rest is for fans only.