Letters of Note: from bedroom operation to global sensation 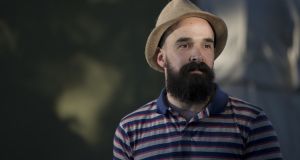 Shaun Usher: “I became obsessed with the concept of letter-writing and how it was dying out.” Photograph: Colin McPherson/Corbis via Getty Images

When Shaun Usher started his website nine years ago, he didn’t have world domination on his mind.

“I literally started the blog to pass the time in a sales job I hated,” he recalls. “In the evenings when I got home I’d let off steam by doing the blog”.

That blog was Letters Of Note, in which he gathers together famous, noteworthy, or just plain fascinating letters from around the world. This hobby grew from a bedroom operation to global sensation, and one of the web’s last remaining destination websites. Usher’s finds can vary in time and place from hundreds of years to thousands of miles, so long as he feels they’re, as per his slogan, “deserving of a wider audience”.

“It was just an obsession – still is,” he says. “I started the website and thought it would be my wife, my mum and my dad that would read it. In the beginning it was, but within weeks it took off.”

We’re speaking ahead of the release of Speeches of Note, his fourth iteration of the Of Note canon, following two volumes of letters and one of lists, a bibliographical journey that began with a distinctly personal motivation.

“I became obsessed after falling in love with my wife by letter,” he says, referring to the romantic-comedy trappings of his own personal love story. Having met his future partner just before she moved to Spain, Usher continued their courtship from England via pen and paper undeterred.

With a backstory so charming, it may as well have been written by Richard Curtis on his third bottle of sherry, it’s no wonder he grew such an affection for the art of the epistle.

“I became obsessed with the concept of letter-writing and how it was dying out. I just thought: we can’t possibly lose this.”

There is good reason to believe that such a risk exists. Last month An Post closed 159 post offices around Ireland and in 2010 World Vision reported that 43 per cent of children had never written a letter, with boys twice as likely as girls to be epistolary virgins. While texts, WhatsApp group chats and profane screaming in PlayStation Private Messages are some of my favourite forms of communication, I admit I don’t write many letters any more, and certainly not many that would be deserving of a wider audience.

I cite one of my favourites from his site, in which Gene Wilder gives elaborate thought to the costume for the character of Willy Wonka. “I don’t think of Willy as an eccentric who holds on to his 1912 Dandy’s Sunday suit and wears it in 1970,” writes Wilder, “but rather as just an eccentric – where there’s no telling what he’ll do or where he ever found his get-up”. The letter is a masterpiece of meticulous consideration, right up to its final axiom of “to match the shoes with the jacket is fey. To match the shoes with the hat is taste”.

Surely letters with this kind of delicious, throwaway elegance would be unthinkable today?

“Well, you could say it wouldn’t happen these days,” says Usher, “but I know that it actually does, since people write to me now – but I’m in a lucky position”.

“If I receive a handwritten letter from someone, I just instantly react, knowing that’s been done, the effort.

“In fact,” he says, “getting the typewriter is even more effort. In the first Letters of Note book, I typed out a letter – dear readers, and so on – and it took me three days to type that out, without making a mistake. People like Mark Twain used to write 60 letters a day!”

“I think great speeches still exist and are still delivered,” he says, “but they’re swimming in such an ocean of content now. I started this project with the speech Nixon wrote for the eventuality that Neil Armstrong and Buzz Aldrin never returned from the moon. I saw that and got thinking about other speeches that were never made”.

Nixon’s is a particularly stunning entry in the book; a sombre, reflective paean to exploration, penned by presidential speechwriter William Safire.

“They will be mourned,” he wrote, “by a Mother Earth that dared send two of her sons into the unknown”. It ends by assuring the listener that “every human being who looks up at the moon in the nights to come will know that there is some corner of another world that is forever mankind”.

“I thought that would make a really interesting book or even a whole book,” says Usher, of his original conception, a volume exclusively of undelivered speeches, which eventually morphed into a collection of those that he found touching.

“I just thought there was a gap for a collection of speeches that you wouldn’t find in those other speech books. Not that you wouldn’t find any of the classics there,” he assures me. “There are a few that are quite famous, but they’re surrounded by ones which, for whatever reason, aren’t known nearly so well.”

Which among them would he mark out for special favour?

“Can I say all of them?” he proffers, in a game, but futile, attempt to achieve the author equivalent of asking a genie for infinite wishes. Sensing my refusal he demures. “Well in that case,” he says, “there’s a commencement speech by Kermit the Frog you won’t get that anywhere else and, oh,” he suddenly jolts. “There’s one by [Theodore] Roosevelt from when he was trying to get re-elected. He left his hotel to give it one morning, and got shot.

“The speech was like 70 pages long and it was folded in his pocket,” he says.

“The bullet went through the speech and slowed it down, but that bullet stayed in his chest for the rest of his life. He refused to go to hospital until he’d made that speech, and it went on for about an hour. He starts it off by saying: “I don’t know whether you fully understand that I have just been shot; but it takes more than that to kill a bull moose””.

The photo included in the book displays the speech itself, clearly punctured twice. “It’s shot in two places,” Usher explains, “since the folded paper had doubled on itself”.

“I suppose I was looking for speeches that were amazing stories as well, not just eloquent or famous, or the classics of the Greeks”.

Panti to Elizabeth I

How does one decide which stories to tell?

“Gut feeling,” he answers, “I had a long list of about a thousand speeches when I was doing this book, and I had to cut them down. I wanted to get a good a balance, and constantly thought about diversity in terms of gender, race and so on. I am a 40-year-old white man,” he laughs, “so I know my blind spots, it’s never going to be perfect, but I was really trying to make it as diverse as possible”.

“It’s just something that moves me and brings it back to me,” he says of the perfect candidate for inclusion in his collections. “I don’t think a speech has to be brilliant on paper to be well performed, and some are beautifully written but then terribly delivered. You can’t predict it. I was just looking for things that would work in this book, and that was all gut feeling really.”

The book certainly has an unexpectedly Catholic taste, with speeches, such as Panti Bliss’ Noble Call from 2014 nestled alongside the oration of Elizabeth I in 1588. The book avoids being cast to one particular mood or oeuvre.

“If you search ‘great speech’ online, 99 per cent of the results are horrendous.”

A cursory glance at just such an endeavour draws up a lamentable slew of life-coach nonsense.

“A few I found on YouTube made the book,” he assures me. “Donovan Livingston did one, a spoken word thing, that’s basically a poem and it’s fantastic... it’s just delivered so well; the rhythm and musicality. Even on paper, it still works.”

And, I offer as we part, it’s so much easier to fold in your pocket should you ever need to stop a bullet.