Small Victories: The True Story of Faith No More review 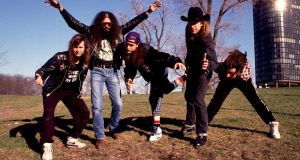 What are Faith No More? It’s a question I’m unable to answer in 25 years or so listening to the band. Faith No More have never made sense. After the group’s mainstream breakout at the beginning of the 1990s, the music industry – obsessed with fitting bands into boxes – tried to figure them out. All in vain.

In 1990, Faith No More had record bosses and the music press fumbling with their finger buffet labelling system. Two years later, the band had essentially microwaved what we considered “mainstream music” with the first of their two masterworks, Angel Dust (the other being King for a Day, Fool for a Lifetime). Midlife Crisis became a hit – with lyrics inspired by Madonna’s manufactured soap opera life, accompanied by an MTV video of Catholic imagery and a man being dismembered by a band of horses. This group was not walking a road that would end in the lameness of something like Californication.

Midlife Crisis encapsulated the beauty and essence of Faith No More, if that’s possible – their non-identity was their identity. They told the 12-year-old music fan that it’s okay to dig any style of music if it’s good. With Angel Dust, the band pulled metal heads from their caves to hear other sounds, like electronica or hip-hop; they nudged teenagers to check out guys with funny names like Burt Bacharach, John Barry, and hell, even Lionel Richie; they sampled Beastie Boys’ samples, used loops, breakbeats and turntables.

Most importantly, Faith No More said music should be fun, exhilarating – and we needed that at a time when darkness surrounded most of the grunge scene, and we were all still waiting to guffaw ironically at the puffed-chest poseur pomposity of heavy rock and metal. Watching old live footage of Faith No More now, I realise that a major reason why I love them is because they made me laugh. (“The reason the guitarist takes so long with this intro is because he’s sixty-five years old.”).

In this book, Adrian Harte documents the band’s history and tries to capture the sense of mania and madcappery that’s always surrounded them. For such an influential, important and relatively successful group, Faith No More have been underserved in telling their tale. Monaghan man Harte, who runs an entertaining and valued blog on the band, has delivered a solid, well-researched and affectionate portrait.

It has its flaws though. The author being a self-confessed fanatic of the band hinders the book at times; he’s not critical enough in places, for example when it comes to weighing Faith No More’s output that bookended their career – We Care A Lot and Album of the Year – which are poor in musical and relative terms. I was also hoping for one big scoop that might help put the book on more people’s radar, and which could make up the minds of any Faith No More fans dithering about buying it. A lot of the stories have been kicking around for years now, and the book’s subtitle The True Story rings hollow when two of the biggest voices from the band’s history, Mike Patton and Jim Martin, are missing except for archive interviews.

Harte had good access to the founding three members – Billy Gould, Mike Bordin, Roddy Bottum – and has made a decent fist of pulling together a complicated, and, I’m sure in parts for some, hazy, biography. All the same, this reader came away feeling there are stories still to make it into print. Jawbone Press should be saluted, nevertheless, for publishing such leftfield music books (other titles include the likes of Lee Hazlewood, Carl Wilson, Moby Grape etc). Their editors could be a little sharper with the cuts, though – for example when Harte compares bass player Billy Gould to the philosopher and sociologist Theodor Adorno, or this segment, which reaches “11” in a spirit of Spinal Tap:

“Faith No More’s varied discography and rotating cast of guitarists and singers lends itself to Heraclitian analysis. Depending on whenever you dip your feet into the band’s oeuvre, the band is never the same. But the enduring presence of the band’s core . . . offers an alternative Parmenidean explanation. There is change, since change consists in things coming into being or ceasing to be; once Faith No More came into existence, ‘unbeginning unending’, on that October night, it did not change.”

As the band peters out, so too does the book, but that’s no fault of the author. It feels natural. Following an exhilarating return with the 2015 album Sol Invictus, the future of Faith No More is left hanging, too, except for a vague note at the end. But that probably says more about this eccentric and somewhat dysfunctional group of musicians than it does of Harte. Faith No More: still not making sense after all these years.