Breathing polluted air is though to kill more than 1,100 people in Ireland each year 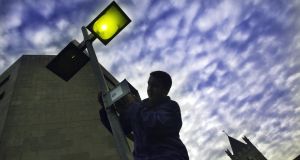 It could be worse. Ireland’s position on the west of Europe means that it is first in line for fresh air from the Atlantic. Air pollution tends to get worse as you travel east and south across the EU. Distance from Europe’s main centres of population is beneficial too. London and Paris have a combined population of over 15 million people and are separated by just 350km, slightly more than the distance between Cork and Sligo, creating air pollution challenges for southeast England and northern France, but Ireland has challenges of its own too.

Ireland has an enduring love affair with the diesel car. In 2016, 71 per cent of new cars were diesel; the highest share of any European country, equalled only by Luxembourg. In the wake of the Volkswagen scandal we now know that these cars were passing ever tighter tests in the laboratory but emitting on average over six times more nitrogen oxides on the road. Governments have been slow to act, many fearing pressure from their car industries. But Ireland has no mass car manufacturing and has bought far more than its share of polluting diesels. People are voting with their wallets. In the UK, diesels have slumped and now make up less than a quarter of new car sales. In Ireland their market share has fallen to about half but it will take many years before the existing diesel cars reach the scrap heap.

Electric cars are part of the solution but who wants to swap streets congested with petrol and diesel vehicles for ones congested with electric cars? We can do better. Walking or cycling instead of driving can help with air pollution, climate change emissions and the noise that plagues people who live close to main roads. There are huge gains from exercise too; tackling the modern illnesses of our sedentary lives without going to the gym. Things are changing. Between 2011 and 2016 the number of people cycling to work in Ireland increased by 42 per cent. The cycle and walking friendly streets of Denmark and the Netherlands were not created by accident. They are a deliberate decision to avoid cities being choked by traffic. A recent European study highlighted that the costs of transport, infrastructure, accidents and environmental damage are far greater than the taxes and charges paid by users. Moving some of this hidden subsidy towards encouraging walking and cycling and reclaiming our streets from cars and lorries could have many benefits beyond air pollution.

Ireland also has a love-affair with the open fire. Open fires caused the smogs that plagued London until the 1960s but this is not unique to the UK capital. Dublin has had its problems too, resulting in the smoky coal ban in 1990. As discussed in my new book The Invisible Killer, the ban did not begin in a government office but in a hospital.

In 1982 Luke Clancy was a doctor at St James’ Hospital in Dublin. An extra 54 inpatients had died that January compared with the years before. Clancy had to find out why, and quickly. Despite extensive investigations, no bacterial or viral cause could be found. Clancy was befuddled until he looked out of the window and saw the smoke rising from the homes across the city. Maybe the problem was not inside the hospital but outside.

Coal-burning in Dublin had increased through the 1970s because of rising oil prices and inducement from government grants. As in the 1952 London smog, the pollution peaks matched the increased deaths. The Dublin ban was an instant success. Wintertime smoke decreased by 70 per cent compared to the pre-ban period; deaths from respiratory problems dropped by 16 per cent and Clancy estimated nearly 360 fewer deaths per year. The smoky coal ban was rolled out to another 11 cities, resulting in smoke reductions of between 45 and 76 per cent and is now being extended nationally. Research is needed to check that it works. New data from teams at University College Galway and University College Cork have found that Dublin is now being affected by wood and peat smoke; fuels that are not banned.

Most European countries are heavily urbanised and therefore air quality laws focus on the big cities. In the UK, 17 per cent of the population live in the countryside but for Ireland it is nearly 40 per cent. The SAPPHIRE project at UCC found that particle pollution can increase by 10 times during the evenings in small towns across Ireland because of coal, wood and peat burning. We can also fight air pollution with home insulation and green energy solutions, tackling climate change and fuel poverty at the same time.

We do not normally think of farming as source of air pollution, but manure and fertilizer releases ammonia into the air which reacts with pollution from industry and diesel exhaust. It is this mixture of pollutants that caused Paris to ban half the cars from its roads as an emergency measure in 2014. With ever more farming, controlling this source will be hard for Ireland but farmers should remember that the ammonia that drifts into the air is wasted money. Farm machinery uses diesel fuel too and the exhausts lack many of the controls that we find on cars and lorries.

While Ireland’s National Clean Air Strategy is still waiting in the wings, the UK announced its version on January 14th. Significantly, it was launched with speeches by two cabinet ministers; Michael Gove (environment) and Matt Hancock (health), and importantly takes a holistic view with plans that cover traffic, home heating, farming and shipping. Its success will be judged by the actions that need to follow but a move to tackle all sources of air pollution, rather than one source at a time, sets a new benchmark.

Gary Fuller is an air pollution scientist at King’s College London. His book The Invisible Killer: The Rising Global Threat of Air Pollution and How We Can Fight Back is published by Melville House UK