The Negotiator's Cook Book by Gerry Adams: Long Quiche on the menu 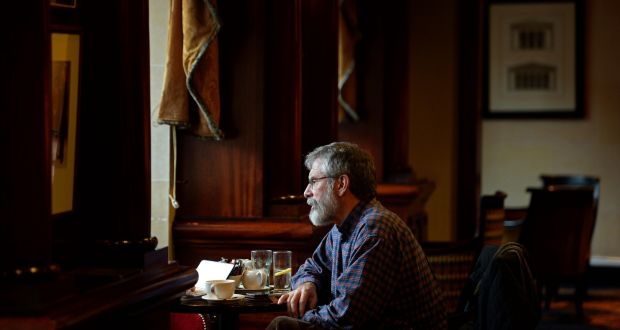 Gerry Adams was said to have made the worst cup of tea in Long Kesh. Photograph: Eric Luke

As someone who was said to have made the worst cup of tea in Long Kesh, Gerry Adams’s culinary knowledge appears to have improved remarkably over the intervening decades. Nevertheless, his latest oeuvre, The Negotiator’s Cook Book: Best Kept Secret of the Irish Peace Process, is unlikely to establish his reputation as a foodie. Using painfully awful puns such as Long Quiche and Turkey ár Lá, the veteran republican offers his readers a range of basic recipes more often found in a first-year home economics primer.

Apart from Beef Paprika and the intriguingly named Chilli McCarney, the author has not provided us with any rare, exotic or even exciting dishes. Few would criticise his promotion of those reliable old products of our grandmothers’ ovens; soda and wheaten bread. Likewise boiled bacon, cottage pie, rice pudding and apple crumble make for fine fare – but really, do many homes in Ireland need to be reminded of the ingredients required or how they are prepared? One dish that has surprisingly been omitted, though, is the cholesterol-reducing super food porridge. Perhaps the negotiating team had a few bad experiences with this particular meal?

In fairness, though, it must be said that there is nothing pretentious about the recipes. The ingredients are readily available and for the most part, at a reasonable cost. For those of us with little skill in the kitchen, the instructions are helpfully clear and easy to follow. As a famous football coach used to advise, “just do the simple things well”.

It is difficult, all the same, to imagine the former Sinn Féin president seriously thinking about joining Neven Maguire or Rachel Allen on the celebrity chef circuit. The reasoning behind the publication is not altogether clear. Cynics might suggest a party fundraising initiative to offset diminishing financial contributions from elected representatives. Yet selling at a modest €9.99 and currently available only in party outlets, that is hardly the primary objective.

While it’s never easy to identify his innermost thoughts, the ever-strategic Adams has surely more in mind than simply promoting homely menus. The deliberate inclusion of Ted Howell and Pádraic Wilson coupled with endless references to peace process negotiations may offer a clue.

Howell and Wilson have played an important part in Sinn Féin’s transformation and development over the past decades. They were also central to ensuring that the organisation’s support base would endorse compromises involved in the Belfast Agreement. These would be significant factors if the party is attempting to signal the need for and its commitment to a renewed and meaningful political engagement.

With the UK preparing to leave the European Union, uncertainty prevails in the North. Theresa May’s proposed deal with Brussels, including a Dublin-demanded backstop, has unnerved much of unionism. Relations between the DUP and the business and farming sectors are strained as never before. Police chiefs in Belfast are raising the possibility of drawing on forces in Britain for extra manpower to deal with potential unrest. And gnawing away in the background is the unsettling knowledge that changing demographics are steadily reducing Northern Ireland’s pro-union majority while raising the spectre of a Border poll.

As the only major political party in Ireland with a meaningful presence in both jurisdictions, Sinn Féin is all too aware of how fragile the situation is in the North. They also realise how unprepared the Republic is for potentially dramatic changes north of the border. Gerry Adams and his colleagues undoubtedly see it as timely to remind London and Dublin that their party remains central to political development and stability in the North and by extension across the island. Contrary to what its detractors often imply, modern Sinn Féin has no interest in chaos and has an aversion to political violence.

With the Assembly in cold storage and the DUP happier to lecture the House of Commons on Brexit than revive Stormont and face criticism over the RHI “cash for ash” scandal, there is an absence of political engagement, not to mention negotiation. The book’s title, Negotiator’s Cook Book, along with an introduction illustrated with so many photographs of Gerry Adams and his Belfast Agreement negotiating team delivers a whimsical but hardly unintended message. Sinn Féin is ready, capable and willing to do a deal and is prepared to invest time and energy in the effort.

While he never loses sight of the issues of the day, there is too a lingering suspicion that the author may have an eye on the long game. In spite of denying profile rebranding, there are faint echoes here of Colombey-les-Deux-Églises. This was the country home of Charles de Gaulle, where the old general would retire to spend time writing while awaiting a call to return and serve the nation. With this distinctly odd publication, Gerry may also be reminding us that he hasn’t gone away you know.

Tommy McKearney is a former IRA hunger striker. He edits Fourthwrite magazine and is a union organiser