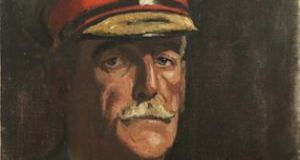 General Sir Edward Bulfin was the most senior Irish Catholic serving in the British army in the first World War. That alone makes him interesting, yet this timely biography calls him “Ireland’s forgotten general”.

He most certainly would not have been forgotten had he accepted Winston Churchill’s invitation in 1920 to take over the Black and Tans and Auxiliaries during the War of Independence.

He was, according to General Nevil Macready, the commander-in-chief in Ireland at the time, the “one and only man” for the position.

Wisely for himself and his reputation, Bulfin turned down the role telling Churchill that as a “Catholic and an Irishman it would be distasteful to him to do any work of this kind which was not of a purely military character”.

Bulfin was born into a prosperous Dublin family. His father Patrick was a merchant who made his fortune in the grocery trade and bought Woodtown House in Rathfarnham. Edward sold the family pile to, of all people, Eoin MacNeill, the founder of the Irish Volunteers, and his brother James two months before the Easter Rising took place.

In 1871 Patrick Bulfin became the Lord Mayor of Dublin, but at the zenith of his influence, he had a heart attack in office and died when Edward was eight. His sudden death left Edward’s mother Teresa a widow with eight children.

Edward spent the rest of his life in England or, more often than not, in the service overseas of the British empire.

This sympathetic biography is written by John Powell, a retired officer from the Green Howards (also known as the Yorkshire Regiment), Bulfin’s old regiment. Powell recounts the full-length portrait of Bulfin in the regiment’s headquarters at Richmond in Yorkshire and often wondered what became of a man whose reputation as a general was enhanced not diminished, unlike so many others, by his service in the first World War.

Bulfin made his mark early in the war with his performance at the Battle of the Aisne and especially during the first battle of Ypres in 1914 when he ordered an audacious counter-attack through a wood when the Germans threatened a potentially decisive breakthrough.

In November 1914, he was seriously injured by a German shell and invalided home. The title of the book “Haig’s Tower of Strength” comes from the future British commander-in-chief Field Marshall Sir Douglas Haig’s comments when he heard of Bulfin’s injury: “A great loss to me as he was a tower of strength at all times”.

Despite suffering severe head injuries, Bulfin was back in command after just six weeks recuperation, but his reputation just about survived the terrible Battle of Loos in September and October 1915. Bulfin’s command of the 28th Division was an unhappy one. He described it as a “horrid nightmare” as his division was called upon to make one futile attack after another. Powell, having carefully assessed the evidence with a soldier’s eye for logistical details, concludes that Bulfin “performed as capably as most at Loos” and the division was unfairly maligned for its performance.

Bulfin restored his reputation in the final year of the war as a Lieutenant General in charge of XXI Corps during the campaign which captured Jerusalem and drove the Ottoman Empire out of the Levant. It was the efforts of Bulfin’s XXI corps during the Battle of Meggido, the site of the biblical Armageddon, which provided the basis for General Edward Allenby’s great cavalry victory in the Middle East.

Bulfin spent years away from home during the first World War. He was understandably anxious to return home to his wife and son when hostilities ceased, but fate intervened to keep him detained in the Middle East for another year.

Bulfin found himself as the commander-in-chief in charge of putting down the Egyptian rebellion in March 1919. It had many echoes of the troubles back in his native Ireland. Egyptian nationalists wanted independence for their country which was then a British protectorate. They sought a hearing at the Paris Peace Conference. Instead the British arrested the leaders, precipitating civil unrest. The Egyptian rebellion which lasted for five weeks was brutally put down with the deaths of thousands of Egyptians. Powell is rather euphemistic about Bulfin’s actions. Bulfin had, he wrote, “displayed his usual sense of duty and moral courage to a level of robustness difficult to envisage and many may argue to defend today.” The latter point is inarguable.

Perhaps, Bulfin’s experiences in Egypt in his dealings with the civilian population informed his decision to turn down a command in Ireland.

Students of Irish history will recognise the Bulfin name and indeed he shares a name with the other Edward Bulfin, better known by his gaelicised named Éamon, the man who flew the Irish Republic flag above the GPO during Easter Week 1916.

It would be fascinating to find out what one branch of the family thought of the other. Unfortunately, Edward Bulfin left no diaries or autobiography and scant correspondence so we do not know what he thought of the Irish revolution other than the comments he reportedly made to Churchill in 1920.

In his meticulously researched book, Powell could find no commentary about Edward Bulfin in William Bulfin’s papers either. He concludes tentatively that Edward Bulfin had very little to do with the republican branch of the family.

In any case, Bulfin’s action spoke louder than any words he might have said. He remained a servant of the British Empire after Irish independence and retired as a full general in 1926.

Powell’s book is well-written and always engaging. Too many military books written by military personnel are unreadable outside a limited cachet, but Powell never lets the facts of one battle or another overwhelm the narrative. His admiration for his subject seems merited. Bulfin was an honourable and dutiful soldier who did his best according to his lights.

The book is a timely reminder about that vanished tribe known as Catholic loyalists. Many Irish middle-class Catholics like Bulfin saw no contradiction between their nationality and faith and their loyalties to the Empire. Bulfin attended the Jesuit Stoneyhurst College in Cheshire which turned generations of middle-class Irish boys into English public school boys and loyal soldiers of Empire (though not Joseph Mary Plunkett, a signatory of the Proclamation). Bulfin wrote in the preface to the Stonyhurst war record: “Honour all men, love the brotherhood, fear God, honour the King”.

Men like Bulfin are such an affront to the traditional narrative of Irish history that they have been largely ignored and, for a long time, vanished from the collective memory. Many Irish were more comfortable with British rule than we care to admit and saw in the British Empire, a force for civility in the world. Hard as that is to believe now, the historical evidence that many ostensible Irish nationalists held that point of view is not hard to find.

Recently the Indian historian Shashi Tharoor pointed out in an article in this newspaper about the Amritsar massacre which occurred in April 1919 that the perpetrator of the massacre, General Reginald Dyer was Irish-educated, and the governor of the Punjab Sir Michael Dwyer was from Co Tipperary.

Tharoor wrote: “It is a sobering reminder that the Irish were not merely victims of British imperialism but complicit in it in many parts of the world.”
John Powell’s Haig’s Tower of Strength is published by Pen and Sword, priced £25. John Powell’s talk Ireland’s Forgotten General will take place at the Arthur Griffith Building, Griffith College, South Circular Road, Dublin 8 at 8pm on Friday, February 8th. On Saturday, February 9th, he will speak to the Western Front Association Dublin branch in the lecture theatre at Collins Barracks at 2.30pm.